Posted on July 26, 2011 by LighterThanAirSociety 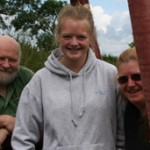 A Shropshire teenager has become the youngest hot air balloon pilot in Britain after gaining her licence on her 17th birthday.

Chloe Hallett from Bishops Castle started having flying lessons when she was 15.

Both her parents are balloon pilots and her mother, Lindsay Muir, is a former British national hot air balloon champion. Ms Muir is also a commercial balloon pilot and instructor. Chloe’s father, Graham Hallett, is the chief technical officer for the governing body of ballooning in the UK, the British Balloon and Airship Club.

Chloe takes over as youngest British pilot from Milli Karlstrom who gained her licence on 21 October last year. She is the daughter of Virgin Balloons chief pilot, Kenneth Karlstrom.

Ms Muir took her daughter through most of her training. “It came quite naturally to Chloe and she was very, very relaxed about it. A lot of students coming into it are very tense most of the way through. Chloe would chat away, look over the side of the basket, burn, talk about something else… and then tell her mother to shut up because she needed to concentrate on the landing,” she said.

Mr Hallett said Chloe’s flying experience was not without drama. “We hit the ground a bit hard, dragged a little towards a tree at the end and unfortunately Chloe just biffed her chin on one of the tanks. It was a bit unfortunate and doesn’t happen very often… it’s a good lesson that you can have quite a hard landing with not too many injuries,” he said.

Chloe is proud to be Britain’s youngest hot air balloon pilot. “It’s good that I’m a girl. There haven’t been many female pilots and it’s good to be a record breaker,” she said,

To qualify for her licence she had to do a solo flight, a check flight and exams in navigation, air law, human performance and limitations and meteorology.

The family travelled to London to collect the licence from Gatwick airport on Chloe’s birthday a week ago.

She said she was not planning on a career in aviation. “I think I’ll get my commercial licence which means I can fly passengers, but I don’t think I really want it as a job, just as a part-time thing really,” she said.

Chloe is hoping to take part in competitions for young pilots under 25 which are starting next year. “I think about competition flying more than I do about just going for a nice fun flight really,” she said.