Zeppelin to Get Radar for Airship Ventures Special Mission Group

Posted on March 19, 2012 by LighterThanAirSociety 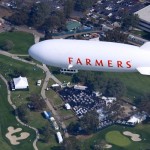 Airborne radar – like what will be featured on the Zeppelin Eureka – promises immediate benefits for marine-based science, technology and defense organizations.

Adding even more versatility to its special mission capabilities, Airship Ventures announced today that they have received FAA approval and completed operational testing of a Raymarine Radar for use on its Zeppelin Eureka. Radar adds the ability for the airship and its special missions partners to collect real-time range, speed and directional information on objects from a distance of up to 48 miles in all directions, covering over 7,000 square miles at a time.

“As airships become more prominent in scientific, research and security communities, we’ve made a strategic commitment to be the market leader and offer a spectrum of advanced technologies on our platforms, as well as a team capable of applying those technologies in groundbreaking ways,” noted Airship Ventures Special Missions Manager Francis Govers. “Pursuing radar certification is just one advanced capability we’ve added, along with infrared, acoustic and laser sensors, in support of this goal.”

The approval comes at a good time for Airship Ventures Special Missions Group, which is undergoing a period of growth and carving out a position of leadership in a burgeoning airship renaissance that has seen the U.S. government pledge over $1 billion to advancing lighter-than-air technology and projects.

Long a technology used by the U.S. Navy, which used a fleet of radar-enabled blimps for enemy submarine detection during WWII, airborne radar promises immediate benefits for marine-based science, technology and defense organizations. Coupled with the company’s recently announced infrared capabilities, potential applications for the technology include search and rescue operations, port security, and maritime patrol. The new capabilities will also add to the airship’s navigational capabilities with the ability to detect and map coastlines during periods of heavy fog or at night.

The technology, which uses reflected radio waves to determine range, altitude, speed and direction of an object, is the latest in a series of advanced sensors aboard Eureka, joining infrared and hyperspectral, among other capabilities. The airship’s ability to be persistent and stay in an area for up to 10 hours per patrol, a period of time well beyond that of helicopters or fixed wing aircraft, coupled with its stable, smooth flight characteristics, make it an unmatched sensor platform.

“Raymarine is very excited to be a part of the advanced technology sensor suite on board the Zeppelin Eureka,” said Raymarine’s Brian Vlad, Global Product Manager for Radar Systems. “Our combination of advanced HD Color digital signal processing, superior target detection, light weight and low power consumption make our radar systems ideal for installation on special mission and high performance vessels of all shapes and sizes.”