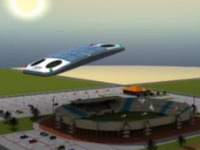 One of the big questions surrounding Qatar as host of the 2022 World Cup has been how it’s going to keep temperatures comfortable on the field. At summer’s peak, Doha’s average temperature hovers well above 100 degrees.

Well, researchers at Qatar University’s engineering school say they have a solution: They have designed a mechanical “cloud,” or more specifically a helium filled airship that can hover above stadiums, like a helicopter, and provide shade. It’s looks spectacular. BBC Mundo — the audio is in Spanish — shares the university’s animation of how the device would work: