Posted on October 16, 2012 by LighterThanAirSociety 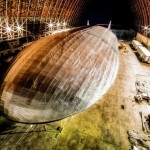 A revolutionary aircraft prototype is now in the final stages of assembly and integration in a World War II airship hangar in Tustin, Calif. Developed by Aeros Corp., a California start-up, and funded by the Defense Department as a potential long-range transportation technology, the Pelican combines buoyant and aerodynamic lift in a different way from other lighter-than-air and hybrid vehicles, and is designed to be more efficient, more flexible and easier to handle on the ground. Its designers think that it could be evolved quickly into a vehicle with a C-17-like payload and range, combined with vertical-takeoff-and-landing (VTOL) capability.

Aeros originally proposed the concept to the Defense Advanced Research Projects Agency as part of the Walrus project for a 500-ton-payload airship. After Walrus lost most of its funding in 2006, Aeros continued developing some key technologies, and its proposal for a demonstrator was taken up by the Pentagon’s Rapid Reaction Technology Office in 2010.

Aeros refers to the Pelican as a “rigid-aeroshell, variable-buoyancy” (RAVB) vehicle. It has two distinctive features. One is a system that controls buoyancy by pumping helium gas between the ship’s lifting gas cell and a pressurized fiber-composite cell. The other is a rigid airframe—last seen on Zeppelins in the 1930s—which is necessary because a non-rigid pressure-stabilized hull would collapse as gas was pumped into the pressure cell.

RAVB technology addresses a classic problem of airship operations: To control the airship’s altitude with a fixed amount of lighter-than-air gas, some way has to be found to compensate for fuel consumed in flight, for different payloads, and for loading and unloading. Most airships have carried water ballast, but for a heavy-lift craft this presupposes that tons of water are available at the destination. Hybrid vehicles (such as the new Northrop Grumman LEM-V) use aerodynamic and buoyant lift at all times, but this means that they need a takeoff and landing run. 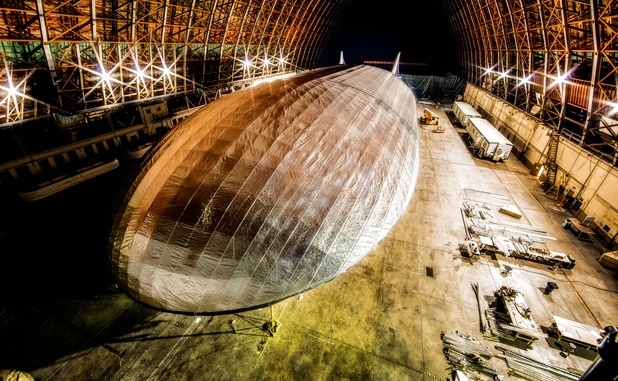 Aeros’ rigid-aeroshell, variable-buoyancy demonstrator nears completion in a World War II-era hangar at Tustin, Calif. The 230-ft.-long airship is intended to pave the way for a larger vehicle with a 66-ton payload. Credit: Aeros

The RAVB can be neutrally buoyant in cruise, regardless of fuel used, and can land and take off vertically. On the ground, it can remain heavier-than-air as payload is unloaded, avoiding the need for tethers or masts and making it less vulnerable to bad weather.

Pelican is 230 ft. long and has a hull volume of 600,000 cu. ft. The primary structure comprises triangular-section carbon-fiber trusses that carry the engines—automotive diesels with thrust-vectoring propellers—the control surfaces and cockpit, and carry the lift loads from the gas cells. Curved secondary frames support an airfoil-contoured outer shell.

Ground tests of the buoyancy control system and the basic structure start at the end of this month, with “simple flight tests” due early next year, according to Aeros founder and CEO Igor Pasternak. The primary goal is to show that the vehicle can be flown and controlled with a combination of variable buoyancy, aerodynamic lift, thrust vectoring and control surfaces.

The next step, Pasternak says, is a vehicle with approximately twice the Pelican’s overall dimensions and eight times the volume—about 450 ft. long and 3.8 million cu. ft.—capable of carrying a 66-ton payload over a 3,000-nm unrefueled range, and with combined diesel and turboprop propulsion. It could also incorporate the ability to superheat helium gas for takeoff—after takeoff, the helium would be allowed to cool to ambient temperatures and the vehicle would use a combination of aerodynamic and buoyant lift in the cruise, at speeds up to 80-100 kt. and up to 10,000 ft. Aeros has also experimented with techniques for extracting water from the engine exhaust to compensate for fuel use. “We could complete the design-build cycle on that vehicle in 28-30 months,” he tells Aviation Week.

The Pelican demonstrator, Pasternak says, includes some “full-scale elements” such as truss members—some of these will be larger on the full-size vehicle, but not all—gas valves and “innovative, pilot-intuitive” flight controls. (The objective is a high degree of automation, says Pasternak, “where the pilot is really the captain.”)

One unique feature of the full-size aircraft that is on the demonstrator is a retractable cockpit on the lower surface. It is fully extended for VTOL operations to provide all-round situational awareness, partially retracts to reduce drag in cruising flight, and disappears completely into the hull when the vehicle is on the ground. The last position permits the flat-bottomed hull to rest flush with the ground, making it more stable in high winds.

This feature is associated with the intended cargo-handling system. The concept, Pasternak says, is “to remove the vehicle from the cargo, not the cargo from the vehicle.” This would imply that the airship lands and the cargo—in containers or pallets—is detached from the ship, after which the craft increases its buoyancy and floats off the load.

Larger vehicles are possible in the future, says Pasternak, “but we strongly understand the need to test an operational vehicle before going to 100 or 200 tons.” So far, the 66-ton vehicle is unfunded.