Ohioan, 94, wakes up to blimp that landed in yard

Posted on August 14, 2011 by LighterThanAirSociety

WORTHINGTON, Ohio (AP) — A 94-year-old Ohio woman who woke up to discover that a breakaway blimp from a nearby airport had landed in her backyard said she heard a bang during stormy weather but didn’t realize what happened until police knocked on her door about seven hours later.

The 128-foot-long blimp broke free of its moorings at a Columbus airport during strong winds early Sunday, then drifted to the sky, headed eastward and landed in Lillian Bernhagen’s backyard in Worthington, less than two miles from Ohio State University’s Don Scott airfield. No one was aboard and no injuries were reported. 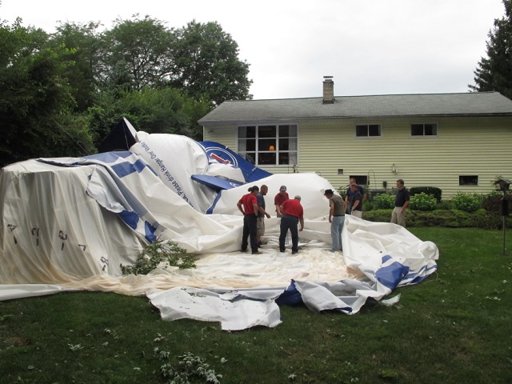 The remnants of a battered blimp were draped over Bernhagen’s picnic table and birdfeeders, covering half her backyard.

Storms had limited the options authorities had to find the blimp until it was spotted in Bernhagen’s yard. The Federal Aviation Administration tried to locate it via radar, while its owners tried to see it from the ground, said state police spokesman Lt. Rudy Zupanc.

As crews dismantled and inspected the blimp Sunday morning, Bernhagen snapped photos to share with relatives and talked about the surprise that forced her to miss her church service.

“It really is quite an occasion to have a blimp land in your yard,” she said. 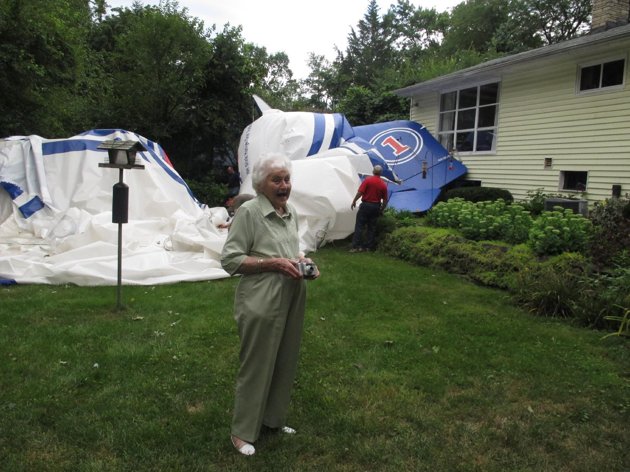 Bernhagen said it appeared the blimp, which was removed by mid-afternoon, had toppled a small tree and slightly bent a corner awning along her roof but didn’t do any major damage to her home.

“I didn’t expect to see one on the ground,” she said. “I’ve only ever seen one in the air.”

The blimp advertises Hangar 1 Vodka and is on a tour of about 20 cities under the direction of an Orlando, Fla.-based airship advertiser called The Lightship Group, said Toby Page, the group’s marketing director. The blimp won’t make its next planned stop in Detroit on Thursday.

“TLG will investigate what happened, but at this time there’s nothing to indicate that it was anything more than a freak thunderstorm,” Page said Sunday afternoon, noting he had no concerns about how the blimp was tethered at the airport.

Asked whether she might try the vodka, Bernhagen joked that she might need a drink after such a ruckus.