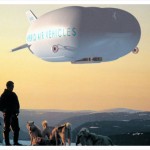 Hybrid Air Vehicles Ltd is a pioneer and world leader in the design, manufacture and support of innovative Lighter-Than-Air (LTA) aircraft products, known as Hybrid Air Vehicles. The company has brought together a long legacy of LTA design and delivery experience and combined it with modern technologies to create a major new, cost effective, low carbon emission aerospace business, focusing initially on the surveillance and heavy lift markets.

Based in Cranfield, UK, the HAV team has more than 1,000 years of combined aerospace experience in building and certifying LTA aircraft. Recent improvements in technology, such as advanced fabrics, control technology and simulation have enabled the team to build a hybrid air vehicle that has significant advantages over the original airship concept. The “hybrid” principle utilizes both aerodynamics and lighter-than-air technology to generate lift – about 60% of the lift is aerostatic (from helium buoyancy) and the remaining 40% is aerodynamic, generated from the vehicle’s shape. Additionally, powered lift is used during take-off and landing by vectoring the thrust from four ducted propulsors.

The result is a range of revolutionary products with global market potential. In 2010, partnering with Northrop Grumman, HAV Ltd. won a $517 million U.S. Army contract to develop the Long-Endurance Multi-intelligence Vehicle (LEMV) for deployment into theatre in 2012. This vehicle is able to operate above 20,000 feet (MSL) with up to 21-days endurance.

Discovery Air is a specialty aviation company based in Canada, with operations around the world. Their service offering includes cargo transport, rotary wing, fire services, logistics and military aviation services. DAI President, Paul Bouchard, has stated “HAV’s heavy lift and cargo market will be a tremendous addition to our range of aviation services. With a cargo capacity of 50 tons at speeds up to 100 knots (185 km/h), we believe this capability will enable economic development of remote, stranded resources with a low environmental impact. The ability to deliver cargo point-to-point without the need for a runway, will mean the infrastructure costs of our clients are reduced substantially.”

HAV’s heavy lift and cargo vehicles have a payload capacity ranging from 20 to 200 tons, with future development potential of up to 1,000 tons. The helium-filled hull creates aerodynamic lift, which when combined with the vectored thrust engines enables vertical takeoff / landing (VTOL), as well as precision hover. The hovercraft landing system’s “suck down” allows for multi-surface operation and load transfer on land, water, ice and snow.

The hybrid air vehicle is also one of the most environmentally-friendly modes of transport. Its flexibility reduces or eliminates transshipments and fuel consumption is equally impressive, saving up to 75% on equivalent payload alternatives. The ability to launch, land and load from gravel airstrips, water, snow or ice surfaces with no preparation or specialist handling equipment saves end-users both time and investment in infrastructure. Ground loading offers roll-on-roll-off capability, while the precision hover allows pick-up and delivery of cargo from ships or other austere locations.

The Heavy Lift Program is currently in its detailed design phase, with construction planned for 2012. The first vehicle is scheduled to enter commercial service in 2014.