Posted on April 26, 2012 by LighterThanAirSociety

PANAMA CITY — The skyline of the Upper Lagoon has been adorned with something out of place over the past few days.

“Everybody crossing over the Hathaway Bridge ought to be able to see it,” said Michael Grunden, project engineer of the Rapidly Elevated Aerostat Platform system tests at the Naval Surface Warfare Center (NSWC).

The SUV-sized, white, helium-filled blimp, suspended 500 feet in the air, is known as an Aerostat. It is tethered to a mobile, independent base equipped with technology for operating unmanned vehicles from shore.

The Aerostat acts as a satellite, relaying signals to the unmanned vehicle that would otherwise be out of range from the base, according to Grunden, who has been involved in the project since its inception over a year and a half ago.

The Aerostat system at the NSWC is one of only three in the world and the only one in the U.S. The other two are currently on combat operations in Afghanistan, Grunden said. 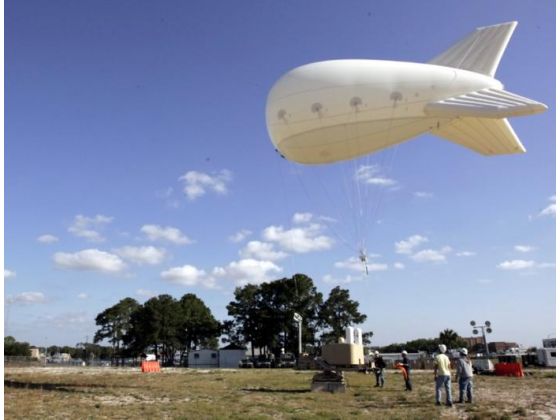 This helium-filled Aerostat blimp has been seen flying over Naval Support Activity Panama City for the past couple of days. The blimp is used to link communications between unmanned military vehicle and shore based guidance control centers. The blimp will be flown daily through Friday, April 27.

The Aerostat is capable of being deployed up to 1,000 feet in less than 20 minutes and operates a variety of land or sea unmanned vessels that are out of line-of-sight range.

The primary purpose of the Aerostat tests by the NSWC is to map the range and area in which an Aerostat can be effectively used to extend the range for relaying data in St. Andrew Bay or the Gulf of Mexico.

The semi-submersible vessel moored in Alligator Bayou, receiving signals from the Aerostat and vice-versa, will head out into the Gulf of Mexico to test the communication capabilities of a remote mine-hunting system. Scientists and engineers at NSWC then will test to see at what distance data can be received and the vessel safely can be returned.

The NSWC’s vision and planned implementation includes a plan to reduce Navy costs by conducting at sea testing and training from a shore based location.

“(NSWC) initially will use it to extend the communications range to unmanned vehicles to control them from shore,” said Jay Doane, senior systems engineer. “Operating unmanned vehicles from shore instead of loading two 20-foot containers with C4 equipment on a ship and operating from sea will reduce testing and training costs.”

The secondary purpose is to provide additional or refresher training on the launch and recovery of the Aerostat system to NSWC personnel.

The Aerostat will remain in the skies above the Bay until Friday, April 27.