Posted on February 2, 2013 by LighterThanAirSociety 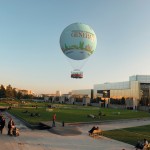 For Parisians wondering if it’s a good day for a jog or a bike across the city, soon they’ll only need look up to learn how clean the air is. Baptized the Observatoire Atmosphérique Generali, a new, one-of-a-kind hot air balloon at the Parc André Citroën will take flight this spring thanks to a new partnership with the European insurance group Generali and the balloon’s designer Aerophile. 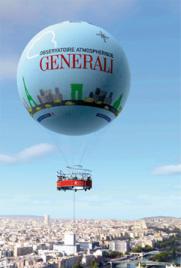 The balloon will visibly inform about 400,000 Parisians daily about the air quality near traffic and away from roads. Moreover, the balloon will carry new instruments to study air samples above Paris. The redesign is part of Generali’s commitment to addressing preventable health costs related to poor air quality in France.

A recent European study of nine French cities revealed that none respect the World Health Organization’s guidelines for appropriate amounts of ozone and fine particulate matter in the air. The study suggests that nearly 3,000 yearly deaths, 1,000 hospitalizations, and lowered life expectancy could all be avoided if France cleaned up the air. The Observatoire Atmosphérique Generali will play a role in monitoring such conditions in Paris. 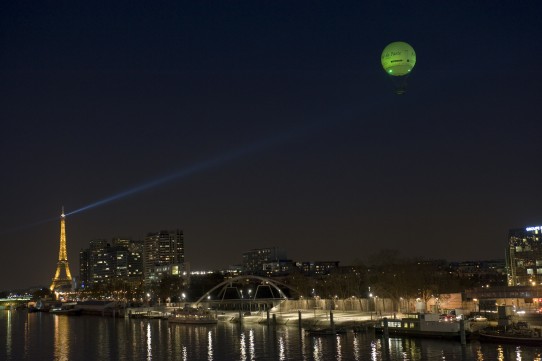 And the insurance moguls at Generali know who is paying for much of the nearly 5 billion Euros that the study says could be saved if France cleaned up its act. Marie-Christine Lanne, director of communications and societal engagements at Generali, said the insurance group has been making environmental issues a priority, especially in France, since the early 2000s. “Insurance is at the heart of everything,” Lanne said, “and we are the first in line to pay when these problems hit.”

She said that Generali has a responsibility to its clients, numbering around 6 million in France, to act responsibly in the face of more frequent storms and increasingly polluted air. The partnership with Aerophile is a strategic response to the climate conditions that impact the global insurance company.

“Our vision is to anticipate these new risks and to try to teach prevention and to inform the public,” she said, adding that she hopes Parisians will start to think twice engaging in potentially harmful activities like taking a car or exercising near motorways.

The balloon will not be a new sight for Parisians, but rather a redesign. The first tethered hot air balloon was launched in 1999 in the 35-acre Parc André Citroën, once the site of the famed French automaker’s factories that closed in the 1970s. A tourist attraction, the balloon welcomed more than 50,000 people a year to purchase a trip up 150 meters, roughly 12 stories, for an aerial view of the capital aboard its observation deck.

In 2012, the previous balloon was outfitted with interior light bulbs that changed color to denote the air quality based on readings citywide, though the signaling was not clear or highly visible during the day. The new observatory balloon will enhance these functions, with 6,400 LED lights indicating ambient air quality with illuminated images of Parisian monuments changing from green to red as pollution increases. Lighted cars will indicate conditions near roadways in the same way. New features, however, will transform it into the first station of its kind.

The balloon will be constructed by Aerophile, which has balloons flying in Vietnam, San Diego, and dozens of locations in between. The newest addition to their list of locations, the Parisian balloon, and their second in France, will better provide a service to citizens by not only signaling the city’s air quality each day, but actively examining it.

Jérôme Giacomoni, Aerophile’s cofounder, said that the major difference is that the new balloon will become a scientific tool in itself, unlike the previous balloon which worked only as an indicator. Using a light optical aerosol counter (LOAC) developed by France’s national research center, CNRS, the balloon will be able to detect superfine particles in the air, as small as one micrometer. A spider’s web is about 4-5 micrometers, to gauge.

“The measurement instrument is already innovative, but putting it in the balloon is what makes this unique,” Giacomoni said, “and I don’t think there’s anything like this in the world.” 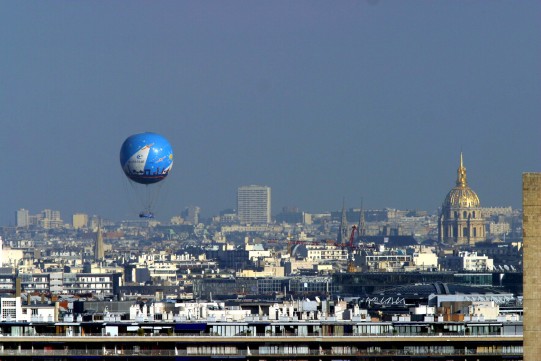 When conditions around motorways are unfavorable, the cars will turn from green to yellow or red. When ambient air quality falls, the colors of the monuments adorning the balloon will change in the same way. The information for these readings will come from air monitoring group Airparif.

Minimizing energy consumption, the lights will be lit by flexible solar panels atop the balloon while the balloon itself consumes the same energy as a standard elevator, Giacomoni said, with backup batteries for Paris’ many cloudy days.

In tandem with City Hall, the observatory will hold classes every morning for Parisian children, offering up to 30 people at time the chance to get a bird’s eye view of the capital while learning about air quality.

The partnership between Generali, Aerophile, and the city will last five years starting this spring.