Posted on November 11, 2014 by LighterThanAirSociety 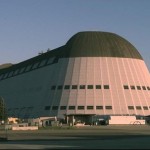 Google has signed a 60-year lease on a former Navy dirigible hangar smack in the middle of Silicon Valley, NASA said.

The Internet company will pay $1.16 billion in rent to the federal government for access to the 350,000 square foot structure, called Hangar One.

First announced on Feb. 10, the deal was finalized on Monday.

A Google subsidiary, Planetary Ventures LLC, will use Hangar One for research and development of technologies related to “space and aviation, assembly and testing in the areas of space exploration, aviation, rover/robotics and other emerging technologies” according to NASA. 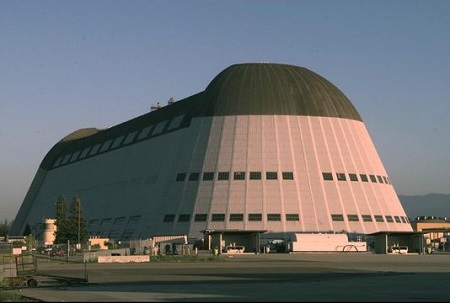 The property is three miles from Google headquarters in Mountain View, Calif.

Google plans to invest more than $200 million in improvements to the property, including rehabilitating the hangars and creating an educational facility where the public can explore the site’s legacy and the role of technology in the history of Silicon Valley.

The site is part of the former Moffett Field Naval Air Station on the San Francisco Peninsula.

Preservationists have been fighting to save the historic structure for years.

Moffett Field’s Hangar One is a well-known landmark, clearly visible on the drive down Highway 101 from San Francisco to San Jose.

The hangar is a part of the nation’s early aviation history. The Navy built it at Moffett Field in 1932 for the USS Macon. It served as the West Coast base for the U.S. lighter-than-air aviation program.

The Navy transferred ownership of the hangar to NASA in 1994 after Moffett Field was decommissioned.

“As NASA expands its presence in space, we are making strides to reduce our footprint here on Earth,” said NASA Administrator Charles Bolden.

“We want to invest taxpayer resources in scientific discovery, technology development and space exploration – not in maintaining infrastructure we no longer need. Moffett Field plays an important role in the Bay Area and is poised to continue to do so through this lease arrangement,” he said. 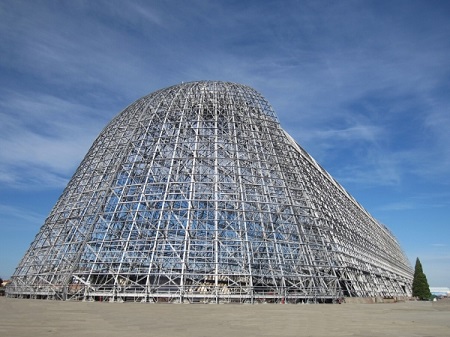 Pictured here is the Hangar One, stripped off of its skin.
Photo : NASA

This entry was posted in Hangars and Sheds, Uncategorized and tagged Blimp Hangar, Google, Hangar One, Moffett Field, NASA. Bookmark the permalink.