Posted on August 23, 2012 by LighterThanAirSociety 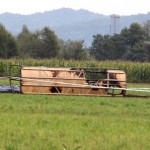 Four people were killed and 28 injured when a hot-air balloon carrying tourists, including children, caught fire and came down near the Slovenian capital Ljubljana on Thursday, the police said.

The balloon was still in flames when the firefighters arrived at the scene of the crash, firefighters’ chief Tomaz Kucic told the official STA news agency.

Police confirmed four people had been killed and recovered their bodies, STA said.

Six children were among the injured, according to Slovenian news website 24ur. A short video on the website showed a police helicopter hovering above a cornfield at Ig, a suburb just outside Ljubljana, where the balloon hit the ground at 8 a.m. (0600GMT) 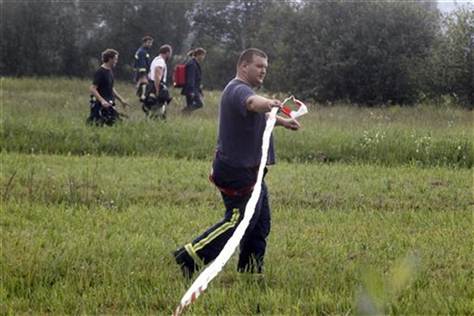 A firefighter places a cordon around an area after it was searched, as rescue personnel try to find the passengers of a hot-air balloon that crashed in Ig near Ljubljana August 23, 2012.
Photo: REUTERS/Srdjan Zivulovic

The area was cordoned off by police.

The balloon was carrying 30 passengers, including foreign and local tourists, a pilot and co-pilot when it caught fire, police told Reuters. All 32 people were accounted for, STA said.

It was not immediately clear what had caused the balloon to catch fire.

“We do not know what caused the accident and the investigation is ongoing,” a Ljubljana police spokeswoman said. 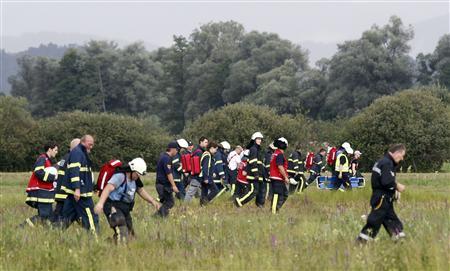 Firefighters and rescue personnel search for the passengers of a hot-air balloon that crashed in Ig near Ljubljana.
Photo: Reuters/Srdjan Zivulovic

STA said the balloon had requested permission to land about 15 minutes before it crashed. 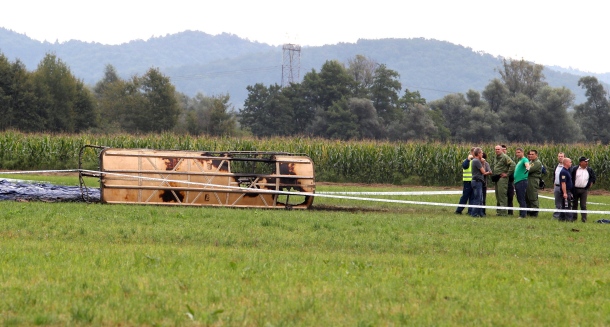 The balloon lies on the ground after having crashed.
Photo: Frankfurter Allgemeine Zeitung