First Navy airship in 50 years unveiled at NJ base

Posted on October 26, 2011 by LighterThanAirSociety 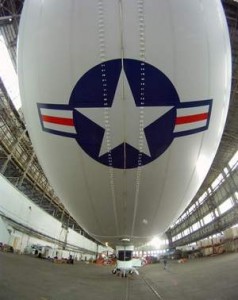 The Navy’s new airship was unveiled to the public Wednesday at Joint Base McGuire-Dix-Lakehurst inside Hangar 1 in Lakehurst. / THOMAS P. COSTELLO/staff photographer

The first Navy airship commissioned in 50 years had its public presentation Wednesday inside Hangar 1 in Lakehurst, the scene of so much history in lighter-than-air flight — and a center for its potential renaissance.The MZ-3A is the Navy’s scientific test platform for surveillance cameras, radars and other sensors, and won’t be deployed outside the United States. But it’s very significant as a return to an older technology, and there have been two years of testing “to prove LTA (lighter-than-air) has a place in our military construct,” said Cmdr. Jay Steingold, the commanding officer of Scientific Development Squadron One.

The sight of a Navy airship again in Hangar 1 was deeply satisfying for Carl Jablonski, president of the Navy Lakehurst Historical Society.“It’s a proud day for us. We had a lot to do with getting this going,” said Jablonski, whose group helped Navy designers with old navy airship manuals and memories of society members who worked with Navy blimps decades before. “This is the first time since 1962 there’s been a Navy airship in this hangar.”

“This is also the Navy’s 100-year centennial for flight, so we wanted to dress it up a little,” explained Steve Huett, director of the Airship System Engineering Team with Naval Air Systems Command at Patuxent River, Md.

The airship is a modified A-170 built by the American Blimp Corp., capable of flying at up to 10,000 feet and cruising at around 50 mph. The Navy began the project in 2006 “to use it as a flying laboratory. The airship is a good platform because it’s very stable, and easy to take things on and off,” Huett said. “A lot of times you want to go slow.”

Civilian blimps are built for advertising, tourism and television work. So why the reappearance of military blimps?

“Airships bring affordability to the game. You can operate an airship for 40 percent of the cost of fixed-wing or helicopters,” said Huett, a graduate of the Navy flight test school who flew Marine helicopters for 15 years, and is earning his own airship certification. “The Army has a big airship program called LEMV, and the Air Force has one called Blue Devil.” 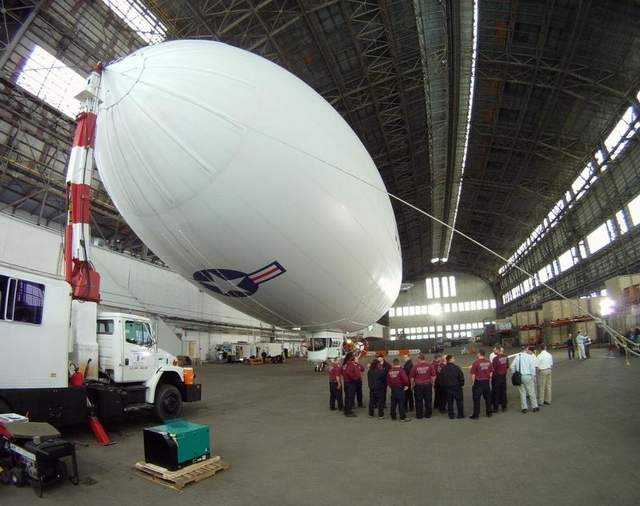 The Navy's new recon airship was unveiled to the public Wednesday at Joint Base McGuire-Dix-Lakehurst inside Hanger One in Lakehurst, NJ. The airship is 180 feet long and can cruise at 10,000 feet. 10/26/11 AIRSHIP1026J ASBURY PARK PRESS PHOTO BY THOMAS P. COSTELLO

The LEMV, for Long-Endurance Multi-Intelligence Vehicle, is taking shape in Hangar 6 at Joint Base McGuire-Dix-Lakehurst, while Blue Devil was inflated earlier this month in a World War II blimp hangar at Elizabeth City, N.C. Both are about the length of a football field, much bigger than the 180-foot Navy ship. But the newest airships would be dwarfed beside the giant rigid-hull airships of the 1930s like the Hindenburg, the German commercial airliner destroyed at Lakehurst when its flammable hydrogen gas cells ignited during a landing in 1937.

“You’re probably talking about the Hindenburg being 37 to 39 times the volume of this airship,” said Mark Kynett, the chief pilot with contractors Integrated System Solutions Inc. of California, Md., which manages the airship for the Navy.

Back then Americans had the advantage of using nonflammable helium for their airships, and the Navy ramped up its lighter-than-air program during World War II when blimps patrolled for submarines offshore. If a pilot from those days could board the MZ-3A, he would recognize the same basic controls of rudder pedals and elevator wheels.

“There’s a lot of physical exertion in flying an airship, mainly in the legs,” said Kynett, who flew Goodyear’s blimps for 25 years before joining the Navy project. “We have the potential for being up 24 hours, but most of our missions are eight to 10 hours.”

The Navy’s old lighter-than-air flight program at the Lakehurst naval air station ran from 1921 to 1962, when the last Cold War-era generation of blimps were decommissioned.

At more than 400 feet long, those ZPG-3W ships were twice the size of the Navy’s new airship, and carried radar systems as part of the national early-warning network to watch for Soviet bombers approaching coastal cities.

The airships carried crews of more than 20 men and logged long-range patrols that stayed in the air for as long as 58 hours.

“They were also known as M ships. The largest ships ever built by Goodyear,” Jablonski said.

But the Navy aviation community was split internally over the continued use of lighter-than-air technology, which some saw as an obsolete drain on resources better spent on rapidly evolving high-performance aircraft.

The July 6, 1960, crash of a Lakehurst-based airship east of Long Beach Island killed 18 sailors, a loss that added pressure on the program. The Navy decommissioned its airship units on Oct. 31, 1961. On Aug. 31, 1962, the last two ZPG-3W ships made a ceremonial last flight over Lakehurst — the base log noted, “This flight terminates operation of non-rigid airships at Lakehurst,” Steingold said.