Posted on June 13, 2011 by LighterThanAirSociety

WASHINGTON, June 10, 2011 – The intelligence, surveillance and reconnaissance support critical to operations in Afghanistan got its start 150 years ago this month, when a balloonist showed then-President Abraham Lincoln how a gas-filled balloon could help the Union Army prevail in the Civil War.

Thaddeus Lowe met with Lincoln June 11, 1861, to pitch the concept of balloon reconnaissance.

The idea wasn’t totally new, explained Tom Crouch, curator for lighter-than-air aircraft at the Smithsonian’s National Air and Space Museum here. The French first used balloons in 1794 to observe Dutch and French movements during the Battle of Fleurus. 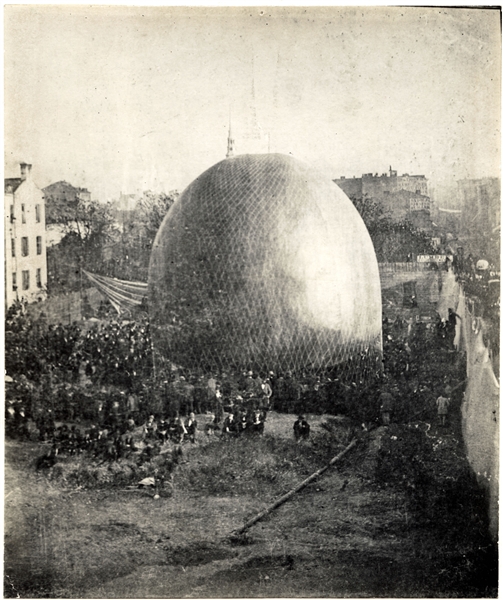 Thaddeus Lowe’s balloon Enterprise, which he demonstrated to President Abraham Lincoln, is inflated in Cincinnati in 1861. Photo courtesy of the Smithsonian National Air and Space Museum .

Lowe got his chance to show Lincoln the balloon’s ISR capabilities as reported his sightings from a tethered balloon as it floated 500 feet over Washington. Lowe took a telegrapher and a lightweight telegraph set with him in the balloon’s basket, and he delivered reports to the White House via the War Department, Crouch said.

“He could see 25 miles in every direction, and was able to report on what he was seeing in the military camps below,” Crouch said. “He demonstrated the fact that if you could get above the battlefield, you could see a lot of useful things: where the enemy was and what the enemy was doing. Obviously, that was incredibly useful information.”

“Some of the most important generals of the war loved the balloons and appreciated their value in what they could deliver,” he said. “They found it genuinely useful in supporting what they were doing.” 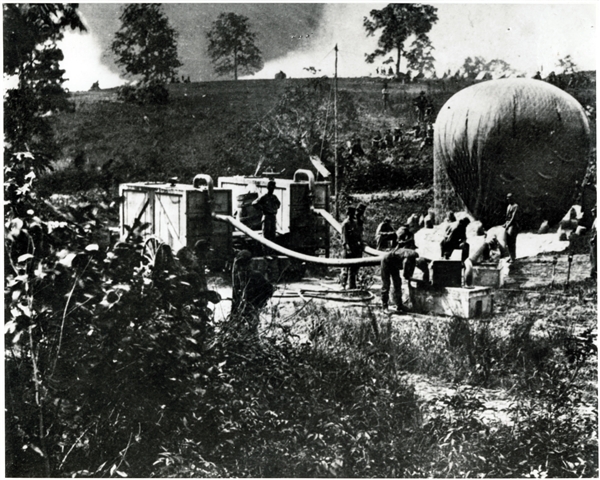 Thaddeus Lowe inflates his balloon Intrepid during the Civil War’s Battle of Fair Oaks in Virginia. Photo courtesy of the Smithsonian National Air and Space Museum.

But the Balloon Corps operated for just two years before it was disbanded in 1863, the victim of bureaucracy as well as logistics. It was run by a civilian organization that wasn’t able to work smoothly with the Army. Further complicating things was the fact that the balloons required extensive logistical support to move and inflate, and an entire company of soldiers to operate.

Another challenge — one military members continue to struggle to overcome today — was to get the intelligence collected from the balloons to the ground troops who needed it as quickly as possible.

After the demise of the Balloon Corps, balloon reconnaissance began to flourish in Europe, Crouch said. And 150 years later, in an age of supersonic aircraft and satellites, Crouch said balloons continue to provide critical intelligence, reconnaissance and surveillance in ongoing military operations. Now unmanned, they’re equipped with cameras, electronic sensors and communication equipment to gather intelligence and provide communications links.

Ashton B. Carter, undersecretary of defense for acquisition, technology and logistics, has worked tirelessly to provide more of this “eyes in the sky” capability to ground forces in Afghanistan. This spring, he announced plans to increase the number of aerostats to support counterinsurgency operations and provide increased force protection.

“We are going to be, this summer, increasing many-fold the number of aerostat-borne cameras,” he said. “They’re terrific.”

The Smithsonian National Air and Space Museum will mark the 150th anniversary of Lowe’s demonstration and the birth of the Union Balloon Corps tomorrow on the National Mall. Re-enactors will portray Lowe, Lincoln and Union soldiers as they demonstrate a 19,000-cubic-foot netted gas balloon, built in 1941 to closely replicate Lowe’s, officials said. The Air and Space Museum also will present presentations about ballooning and espionage during the Civil War and give visitors hands-on educational activities inside the museum.