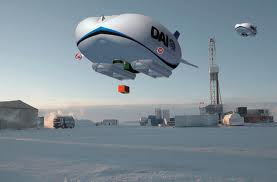 ANCHORAGE, Alaska—You’re looking at that picture of bulbous airships descending on an arctic oil rig and we know what you’re thinking. Stick with us.

What if fuel arrived in remote Alaska villages by blimp instead of barge? What if you didn’t need to build ice roads to distant oil and gas projects because you could haul your heavy equipment slung beneath a giant airship?

Those are some of the ideas being pitched at a two-day meeting called “Cargo Airships for Northern Operations” that began Wednesday at the University of Alaska Anchorage. It’s hard to say how pie-in-the-sky they are—colossal, expensive ideas have an uneven history in Alaska —but Pete Worden, director for NASA’s Ames Research Center in California is a believer.

“By the end of this decade there will be a reasonable number of air ships —maybe tens, maybe hundreds, used in many places in the U.S., particularly Alaska,” said Worden, a speaker at the conference. If so, it would be a stunning resurrection for a flavor of air travel that died more than 70 years ago with the explosion of the Hindenburg and the emergence of jet travel. Now researchers and entrepreneurs see a new life for dirigibles as heavy cargo haulers serving far-flung villages and worksites in Alaska and Canada.

For now, many questions remain. Among the hurdles: Building a cost-effective airship tough enough to defy Alaska’s extreme cold and winds. And with so few modern airships in circulation,

it’s hard to say whether developing new models will pay off for investors. Still, some companies visiting Alaska this week are already betting on an airship Renaissance.

England-based Hybrid Air Vehicles recently announced an agreement to sell a fleet of hybrid, land-anywhere vessels to Discovery Air Innovations of Canada. The first ship would be more than 340 feet long and capable of hauling 50 tons, said Stephen “Fig” Newton, business development director for Discovery Air. The company plans to buy as many as 45 of the lighter-than-air vehicles and put them into commercial use as early as 2014, he said. Some may be used in Alaska, he said, where the company counts oil and gas companies as potential customers. “They’re still 18 to 24 months away,” Newton said.

The aircraft get half of their lift from helium, another 40 percent from good old aeronautical lift—they’re shaped like a bloated wing—and use “vectored thrust” engines that run on jet fuel.

The Financial Times this week reported the airships could cost $30 million to $50 million each, according to the chief executive for Hybrid Air Vehicles.

Airship supporters say the craft can be used for “roadless trucking,” meaning the ships could haul timber without cutting a path through protected forest or carry ore from mines without the need for a haul road.

In rural Alaska, hybrid air vessels could act as a flying department store or medical clinic, traveling from village to village, Newton said. “You could just fly in … land on the water and have the patients come to you.”

The state of Alaska in November signed an agreement with NASA to partner in various aviation and space-related research efforts. That led to this week’s meeting, which is being hosted by NASA and the state Department of Transportation. The workshop cost about $30,000 to $40,000 and is being paid for by registration fees and private sponsors such as Hybrid Air Vehicles, Northrop Grumman and Discovery Air, said Karen Felts, a project assistant for DOT.

Lt. Gov. Mead Treadwell, who launched the meeting with a speech, acknowledged what he called the “giggle factor.” A fleet of dirigibles crawling across Alaska? Really? But the state is at least considering airships as one solution to some of Alaska’s longstanding transportation riddles. “The state spent hundreds of millions of dollars to build the Red Dog road,” Treadwell said. “To the extent that this technology can be a short cut, that’s something that could save the state billions over years to come.”

The first of the next generation of vessels to be completed will likely be a smaller hybrid developed by Northrop Grumman and Hybrid Air Vehicles for the U.S. Army. It’s called the Long Endurance Multi-Intelligence Vehicle and is meant for military surveillance duty, not hauling chunks of a natural gas pipeline or bringing produce to villages.

Airships travel about 100 mph and may eventually be used for moving people as well as cargo, said Worden, the NASA official. Future designs may reach 1,000 feet in length, he said.

Newton, the Discovery Air executive, said he saw representatives of oil and gas companies in the crowd, along with a mix of airship evangelists and “mom and pop” inventors researching new designs in their garages. Shell spokesman Curtis Smith said Wednesday he was unaware of the meeting and that the company has no plans to use airships in Alaska. If anything, he said, the energy company is thinking small, testing a drone that can observe marine mammals along the Alaska coast and fits inside a suitcase.