Posted on April 18, 2011 by LighterThanAirSociety 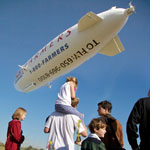 For the next six months, The Farmers Airship will be criss-crossing the United States on the Covering Communities Tour!.

The Airship will soar the skies of half of the nation’s states and make nearly two dozen stops, showing support and adding excitement to Farmers Insurance-supported events in each city it visits. When the airship isn’t supporting events, we’ll be flying passenger tours!

Our approximate* itinerary is:

* All locations are weather-pending and subject to change

This is the first-ever journey of its kind for a Zeppelin airship. Don’t miss your chance to go flightseeing when we are in your neighborhood! Be kept up to date on events in your area. Be the first to know when tour tickets go on sale near you by signing up here.

Seats will be released for sale in each city approximately one week prior to the Farmers Airship’s arrival. Covering Communities flightseeing tours will range from $375-$950/person, plus taxes. Specific rates and tour options will vary by location.

Follow The Farmers Airship’s adventures as she crosses the United States online:

Larger than most homes, the decal is comprised of 697 sheets of vinyl totaling almost 4,850 square feet and measuring approximately 185-feet long by 30-feet high on either side of the Zeppelin. Farmers’ iconic blue and red shield measures 30-feet high by 50-feet wide, while the 17-foot tall letters spelling out the company name stretch over 105 feet. When not flying in support of Farmers events in communities around the country, the Farmers Airship offers passenger flightseeing tours.

About the Farmers Airship

Stretching 15-feet longer than a standard Boeing 747 and 50-feet longer than the largest blimp, the Farmers Airship, the Zeppelin Eureka, is the world’s largest airship at 246-feet in length. Owned and operated by Airship Ventures, Inc., the airship is one of only two Zeppelins commercially flying in the world today and features the largest logo ever used in Farmers’ history.