Posted on September 9, 2013 by LighterThanAirSociety 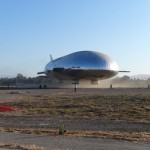 After a 70-year absence, it appears that a new rigid frame airship will soon be taking to the skies over California. Aeros Corporation, a company based near San Diego, has received experimental airworthiness certification from the Federal Aviation Administration (FAA) to begin flight testing the Aeroscraft airship, and it appears that the company has wasted no time getting started. 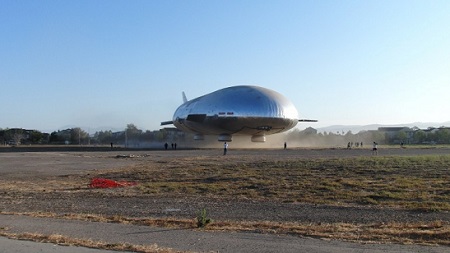 The airship hovers near the ground during tethered flight testing on Saturday, September 7, 2013.
Photo: Aeros

Aeros has provided these photographs of the Aeroscraft airship outside undergoing tethered testing on Saturday, September 7, 2013, and they clearly show the airship off the ground and under control. The large bag structures under airship are landing pads, a type of inflated hovercraft skirt that allow the airship to rest on the ground – or water, or ice – without wheels. 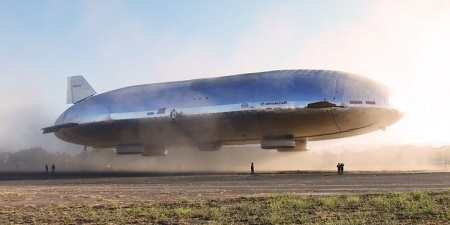 The airship clearly shows the four landing pads. The two small side engines are tilted up in the takeoff position, and an engine in the tail helps with control. The crew sit in the small gondola in the center of the ship.
Photo: Aeros

Speaking to Gizmag, company Communications Director John Kiehle says that the first untethered test flight will be “very soon – within a few weeks” and should see the airship fly around the airfield at a height of about 100 ft (33 m). First flights will not include operating the Aeroscraft’s trademark variable buoyancy system, but that system has been successfully tested inside the large hangar where the airship was built at Tustin, California. 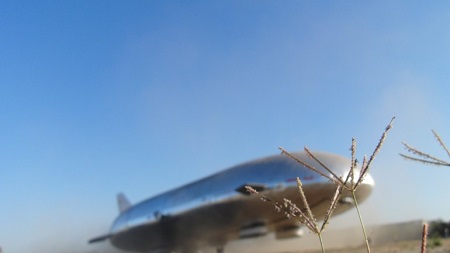 The giant Aeroscraft airship is nearing the time when it leaves the ground for untethered flight. The company says first flight will be ‘very soon’.
Photo: Aeros

President of Aeros Corp., Igor Pasternak, announced the FAA approval on September 5: “I’d like to personally thank the Aviation Safety Inspectors Cindy Napolitano and Kurt Krumlauf at the FAA for their professionalism and effective collaboration with Aeros over these many months.” 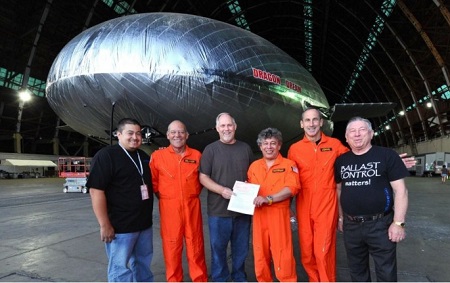 The company also announced the flight test crew for first flights of the airship. Chief test pilot will be 40-year airship veteran Corky Belanger, who has flown just about every airship available. The co-pilot is retired four-star General Raymond Johns, former head of the Air Force Mobility Command. Also on the flight will be someone with a personal stake in the operation – Aeros CEO Igor Pasternak will take on the duties of Flight Engineer.

The Aeroscraft has been under development since 2006, and the US Government has contributed some $35M for research, along with expertise in aerodynamics and control systems from NASA.

The impressive Aeroscraft prototype is 266 ft (79 m) long and 97 ft (29.5m) wide and nearly fills a football field or soccer pitch. It is powered by three swiveling engines – two on the sides and one in the back – that provide both lift and thrust to lift the airship into the air and propel it forward. The rear engine gives control at low airspeeds by pushing the tail around, side to side or up and down. Two sets of wing-like control surfaces are mounted fore and aft, and two large rudders push up vertically from the tail end. These aerodynamic surfaces are used at higher speeds (above 20 mph / 30 kph). As big as this airship is, it is still a one-half scale prototype – the final design is expected to be more than 400 feet (121m) long and be able to lift a cargo weight of 66 tons. 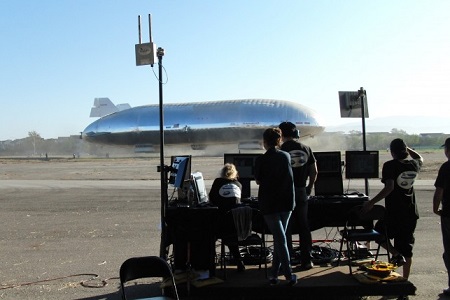 The Aeroscraft is a fully rigid airship, of the type that has not been seen in the air since 1940 when the highly successful airship Graf Zeppelin was retired after flying over one million safe air miles and making 144 trips across the ocean. A rigid airship has a stiff outer frame that maintains its aerodynamic shape regardless of the amount of helium inside the ship. This is different from the more common blimp, where the shape of the airship must be maintained by the internal pressure of the gases inside the envelope. As with all modern airships, the lifting gas inside the large hull is helium, an inert element that cannot burn.

The Aeroscraft airship was designed from the start to haul cargo, and it needed to solve a problem that has prevented airships to be used for cargo in the past: the problem of ballast. Airships are basically balloons with motors and steering, and like balloons, the helium gas inside provides a fixed amount of lift all of the time. If you picked up 10 tons in an airship and delivered it to a remote location, before the 10 tons could be removed from the airship, 10 tons of other weight must be added in order to prevent the airship from rocketing skyward from the extra 10 tons of lift. You could dump a lot of helium overboard, but that gets very costly, as helium is an expensive, non-renewable resource that is found under the ground in natural gas wells. 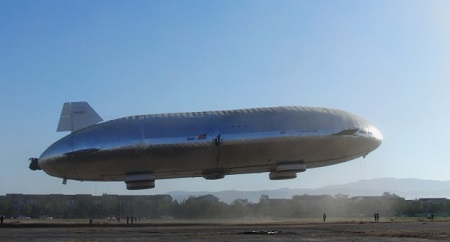 Still attached to tethers, the Aeroscraft prototype lifts a short way into the sky as pre-flight testing continues on the ground-breaking airship
Photo: Aeros)

What the engineers at Aeroscraft have done to compensate for this problem is to take a lesson from submarines. The Aeroscraft airship can compress a certain amount of its lifting gas and put it into fabric tanks, under pressure. The density of the compressed gas is higher so that it is no longer lighter than air, and therefore this airship, unlike any of its predecessors, can change its buoyancy. The company calls this system COSH, an acronym for “Control of Static Heaviness.”

This ability adds another benefit: reducing the ground crew. Since blimps and other airships are always close to neutrally buoyant, they are in fact always flying. To land an airship, a large ground crew comes out to catch ropes and hold it down until it can be attached to something – usually a mast anchored in the ground or connected to a very heavy truck. This ballet of ground handling can take a crew of up to 20 people for even a small airship … and the Aeros is not small. 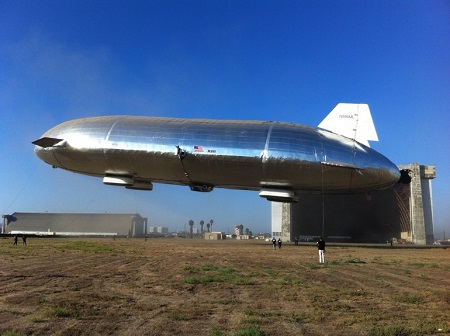 The large silver airship harkens back to an earlier day when giant airships glided gracefully through the skies. This is the first flying fully-rigid airship since the 1940’s .
Photo: Aeros

With the Aeroscraft, the crew starts up a pumping system as it nears landing, which begins to compress the gas in the gas cells, making the craft heavier. The engines on either side power up to compensate, and by the time the vehicle touches down, it is quite a bit heavier than air and will stay in place on its own. The pumps continue to compress helium as cargo is removed and the craft remains heavy as long as it’s on the ground. When it is once again time for takeoff, a proper amount of helium is released from the tanks back into the gas cells, meaning the airship becomes lighter and the engines can easily lift it off the ground in a vertical take-off.

Blimps contain smaller gas bags inside their main envelope, called ballonets (French for “little balloons”) that are filled with air, and the crew can adjust the pressure in the envelope as the airship climbs and descends. As an airship climbs, the outside air pressure reduces, and the helium inside expands. The crew releases air from the ballonets to maintain the shape of the blimp. 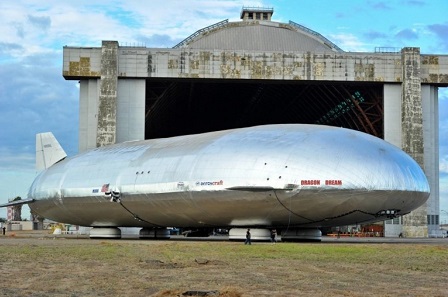 The Aeroscraft Airship sits outside the massive hanger in Tustin, California after its many-year gestation. It rests on four hovercraft pads instead of wheels.
Photo: Aeros

Rigid airships do not have ballonets. Instead they have a series of gas cells inside the rigid frame that can expand and contract independently, and thus have more volume of helium to work with. The frame itself has weight, however, and must be balanced by more helium, which is why airships like the Aeroscraft are so large.

The rationale for bringing back this type of airship relates to its ability to deliver heavy, outsized cargo to remote locations without needing an airport to land at. Communities in locations like Alaska, the north of Canada, Africa, and the Australian outback are rich in minerals but lacking in infrastructure. It is the vision of Pasternak and his crew that the Aeroscraft will transform the delivery of cargo to mines, wind farms and oil fields in remote areas like these.