Posted on February 26, 2013 by LighterThanAirSociety 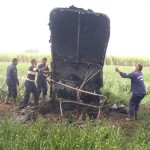 A hot air balloon carrying foreign tourists caught on fire while it was in the air near Egypt’s ancient city of Luxor, killing 19 people, officials said Tuesday.

During an aerial tour of Egypt’s ancient Valley of the Kings, a hot air balloon exploded and fell to the ground in a fiery crash, killing multiple tourists on board. NBC’s Ayman Mohyeldin reports. 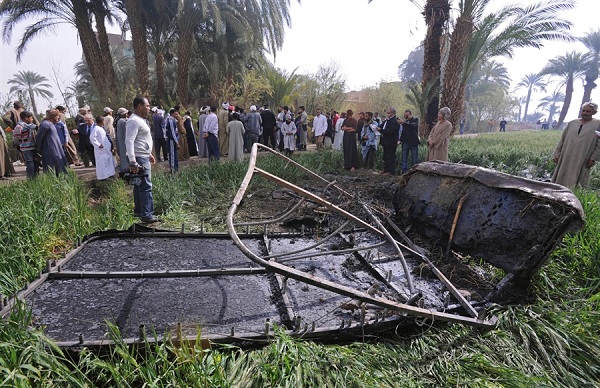 Egyptians gather at the site of a balloon crash where the debris from the burned gondola rests, outside al-Dhabaa village, just west of the city of Luxor on Feb. 26.
Photo: Hagag Salama / AP

The blazing balloon crashed to the ground early Tuesday morning, Gen. Mamdough Khaled, director of security for Luxor Governorate said in a statement, according to initial reports. 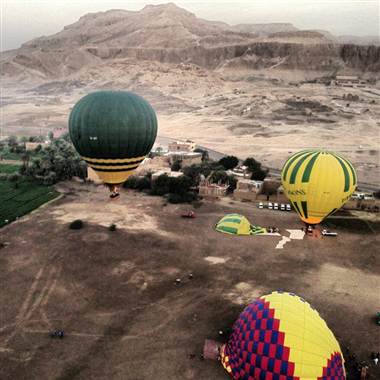 Hot air balloons take off near the ancient city of Luxor on Tuesday before the tragedy occurred.
Photo: Courtesy Christopher Michel

Ahmed Aboud, who runs another balloon company and acts as a spokesman for balloon operators in the area, and Khaled said two people survived. Khaled said both were in critical condition.

There were conflicting accounts of the accident itself.

Aboud said that gas tanks caught fire and ignited the balloon at about 1,000 feet. 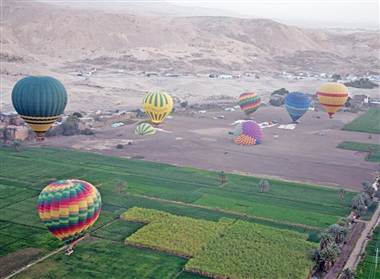 Balloons float in the air in Luxor before another balloon crashed.
Photo: Courtesy Christopher Michel

But an eyewitness, who did not want to be identified, said the balloon was about 12 feet off the ground when a landing rope was thrown to people on the ground. As they grabbed it, the rope wrapped around a gas container, which broke and a fire then started, the witness said.

People ‘like balls of fire’
The witness estimated the balloon then “shot up 500 meters” (1,640 feet) and the pilot “jumped out as it was going up.”

“Eight people jumped and they were like balls of fire, some were alive when they landed, but then died on the ground, then the balloon went up and down again and swept along, then a second explosion occurred when another gas canister exploded,” he added. 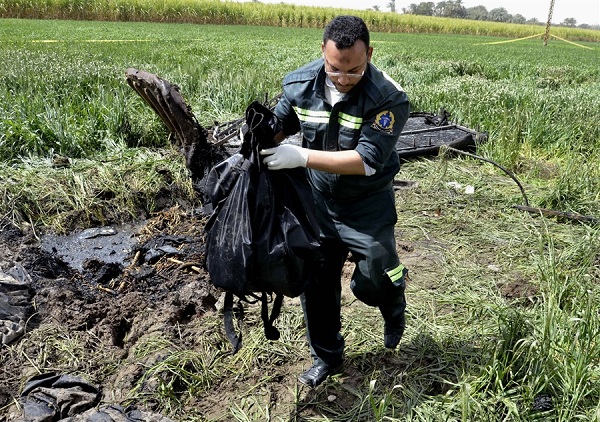 An Egyptian rescue worker collects remains near the scene of a balloon crash outside al-Dhabaa village, just west of the city of Luxor.
Photo: Ibrahim Zayed / AP

Another eyewitness told al-Jazeera television that the balloon was “like a fireball when it went up.”

One Egyptian was killed, Health Minister Mohamed Mostafa Hamed told Reuters, listing the other victims as tourists from Japan, China, France, Britain and Hungary. Earlier, officials had said all the dead were foreigners. 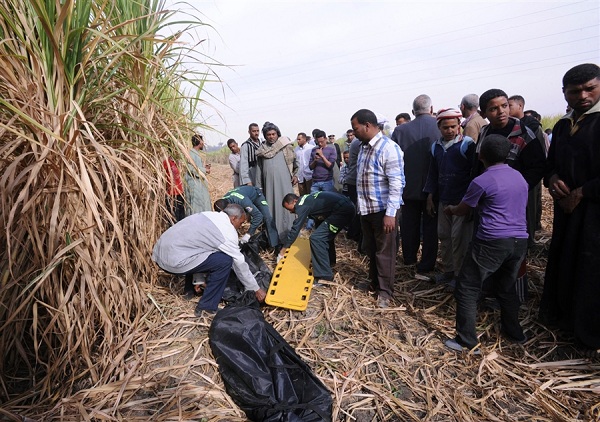 Rescue workers remove a body from the scene of a balloon crash outside al-Dhabaa village, just west of the city of Luxor, 320 miles south of Cairo.
Photo: Hagag Salama / AP

A U.S. Embassy spokesperson said that no Americans were among the victims, citing information from local police.

Thomas Cook Group, a major British travel company, said four of its customers on a seven-day holiday had opted to go on the balloon ride and three had died. A fourth remained in a hospital Tuesday.

“We recommend a number of suppliers” after vetting them, Thomas Cook spokeswoman Emma Staples said. “This one [the balloon company] would have been deemed a reputable supplier.”

Peter Fankhauser, Thomas Cook’s chief executive, called the accident “a terrible tragedy” and said in a statement that the company was sending counseling teams to Luxor. It has stopped promoting and selling balloon flights there while an investigation is conducted, he added. 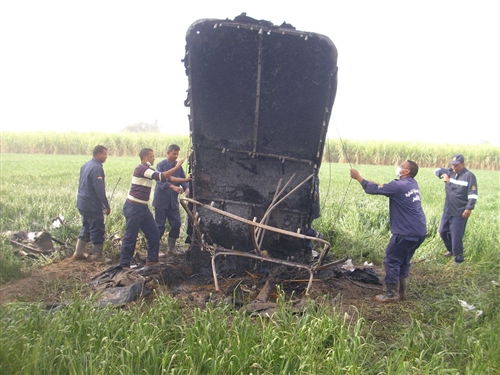 Wreckage at the scene of a hot air balloon crash near Luxor, Egypt.
Photo: NBC News

“It was a huge bang. It was a frightening bang, even though it was several kilometers away from the hotel,” she added. “Some of my employees said that their homes were shaking.”

A team of investigators was sent to Luxor, authorities said, and a moratorium was imposed on balloon flights.

Egypt’s tourism industry has been decimated since the 18-day uprising in 2011 against autocrat leader Hosni Mubarak and the political turmoil that followed and continues to this day.

Luxor’s hotels are currently about 25 percent full in what is supposed to be the peak of the winter season.

Reuters and The Associated Press contributed to this report.