Posted on April 27, 2017 by LighterThanAirSociety

The balloon will float about 20 miles above Earth on a planned 100-day journey.

A stadium-size balloon began collecting data in the upper reaches of Earth’s atmosphere Wednesday, a crucial step in a NASA mission to study mysterious particles from deep space.

The balloon was launched Tuesday from Wanaka, New Zealand, after seven planned launches were canceled because of bad weather. 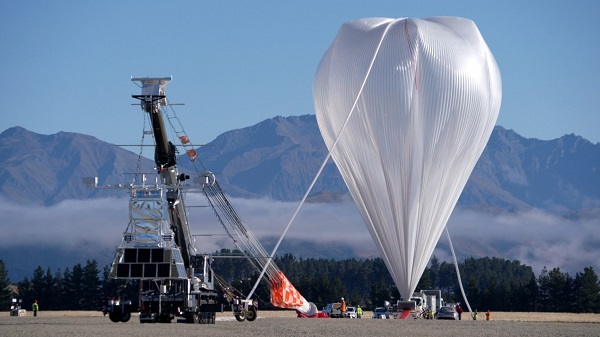 The unmanned NASA balloon, known as a super pressure balloon, lifted off from New Zealand on Tuesday. When fully inflated, the balloon is about the size of a sports stadium.
Photo: Bill Rodman/NASA via Reuters

The unmanned balloon is nearly 19 million cubic feet large when fully inflated and is designed to circle the planet two or three times at an altitude of 110,000 feet. You can track its progress online at the project’s website.

The instrument it carries should help scientists such as Angela Olinto, the mission’s lead investigator, learn more about particles of ultra-high energy that reach the atmosphere after traveling from beyond the galaxy.

“The origin of these particles is a great mystery that we’d like to solve,” she said in a statement. “Do they come from massive black holes at the center of galaxies? Tiny, fast-spinning stars? Or somewhere else?”