Posted on March 19, 2017 by LighterThanAirSociety 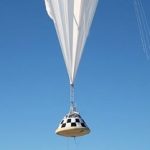 Boeing has moved one step closer to carrying astronauts to the International Space Station.

During a late-February test at Spaceport America, the aerospace company, in collaboration with White Sands Missile Range, sent its Crew Space Transportation-100 Starliner spacecraft to nearly 40,000 feet in altitude before dropping it to simulate reentry speeds and evaluate the capsule’s safety for human use.

The Starliner was designed to accommodate seven passengers or a mix of crew and cargo. For future NASA missions to the ISS, it could carry up to four crew members and scientific research material. 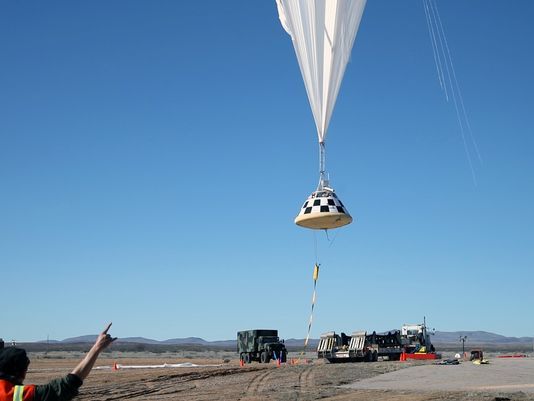 The Boeing Starliner is deployed at Spaceport America for a 40,000-foot drop to test parachute deployment and determine if the vessel is safe for use by future NASA astronauts.
Photo: Courtesy Las Cruces Sun-News

After being released from the balloon, the flight-sized test module floated across the San Andres Mountains before making a successful parachute landing on White Sands Missile Range. The goal was for the spacecraft to reach the same velocity it would during a return from orbit and for the parachutes to deploy, safely landing the craft.

“We took another step toward returning a domestic crew launch capability to the U.S.,” said John Mulholland, vice president and program manager for Boeing’s Commercial Crew Program. “Our team is reviewing the data from this first successful test and gearing up for a few more drops that will enable us to qualify our parachutes for spaceflight.”

Data collected from these tests will be used to verify the parachute inflation characteristics and landing system performance, as well as the altitude and descent rate of the Starliner at touchdown.

“We are proud that Boeing chose Spaceport America as a test location for the CST-100 Starliner,” said Daniel Hicks, chief executive officer of Spaceport America. “It’s been a privilege to support this important endeavor in returning human spaceflight launch capabilities to NASA and the United States.” 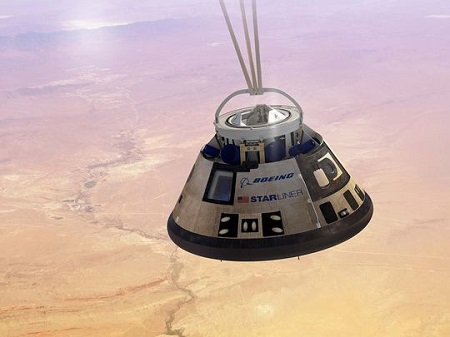 Spaceport America was the choice for the test location for several reasons, said Bill Gutman, vice president for aerospace operations at the spaceport. The balloon, roughly 150 feet in size at launch, can be safely laid out on the spaceport’s long runway and the site offers security for the test as well as emergency response personnel on site. The remote location eliminates large spectator crowds and the nearly 6,000-square-mile restricted airspace offered by WSMR prevents interruption of commercial flights during the test.

The region’s weather is ideal to carry the balloon and test vehicle onto the WSMR grounds for recovery, and the spaceport’s five years of meteorological data helps identify the most opportune conditions for the launch, Gutman said.

“We’ve been told time and time again by Boeing how easy it was to work with us and how happy that made them,” Gutman said. “Anything we can do to make things easy for them makes the mission successful and makes them more likely to come back.”

The data is being analyzed and the capsule refitted for another test launch. Although no specific date has yet been set, further tests of this vehicle are planned at the spaceport.

“They have to refurbish the capsule and get it reset for the next test,” said Vince Barron, airfield operations manager for the spaceport. “Hopefully as they do this, they will get better and better.”