Oh, to Slip the Bonds of Earth

Posted on November 1, 2013 by LighterThanAirSociety 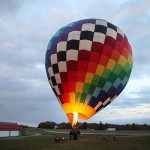 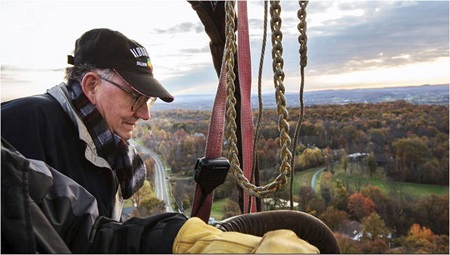 “The first rule of ballooning,” Mr. Holmes said, “is to forget all your troubles and let the world fall away.”
Photo: Tony Cenicola/The New York Times

“The first rule of ballooning,” Richard Holmes said, “is to forget all your troubles and let the world fall away.” Almost as soon as he spoke, the wicker basket in which he was standing, attached to a 100-foot-tall hot-air balloon, began to rise, goosed by a blast of flame from its propane burner, and before long, he was skimming over the treetops here in Orange County. 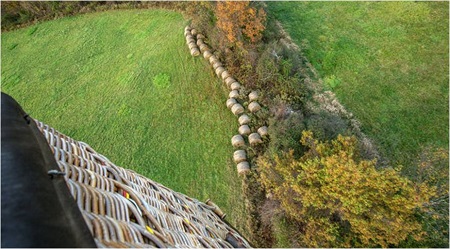 As the balloon slowly ascended, the landscape underneath increasingly resembled a train set. Startled, a buck down below began crashing through bushes. A moment later, the balloon drifted over a quiet country road, and a tractor-trailer gave a three-honk salute. 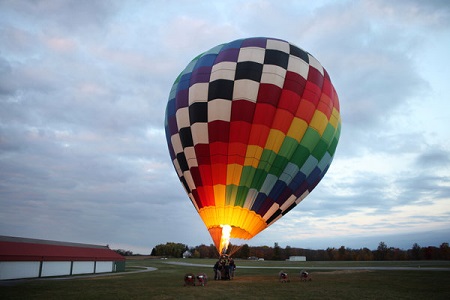 Charles McGrath writes: “Richard Holmes is a fellow of the British Academy and a renowned historian and biographer of the Romantic era. But he is also a famously hands-on scholar who believes in immersing himself in the lives of his subjects, and in the course of researching his new book, ‘Falling Upwards: How We Took to the Air,’ a history of ballooning in the 18th and 19th centuries, he became an enthusiast or, as he puts it, ‘an occasional visitor to the skies.’ ”
Photo: Tony Cenicola/The New York Times

Donnish in looks and manner, Mr. Holmes is a fellow of the British Academy and a renowned historian and biographer of the Romantic era. But he is also a famously hands-on scholar who believes in immersing himself in the lives of his subjects, and in the course of researching his new book, “Falling Upwards: How We Took to the Air,” a history of ballooning in the 18th and 19th centuries, he became an enthusiast or, as he puts it, “an occasional visitor to the skies.” While in New York recently to promote the book, published on Tuesday by Pantheon, he couldn’t pass up the chance to make a predawn journey to Above the Clouds, an outfit that does hot-air flights out of Middletown, and get a little more air time. 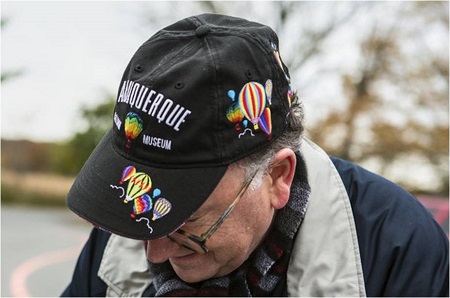 “While in New York recently to promote the book . . . [Mr. Holmes] couldn’t pass up the chance to make a predawn journey to Above the Clouds, an outfit that does hot-air flights out of Middletown, and get a little more air time.”
Photo: Tony Cenicola/The New York Times

Ballooning, Mr. Holmes pointed out while aloft, has in many ways come full circle. The Montgolfier brothers initiated the first untethered flight in Paris in 1783 with no particular end in mind but just to see if they could. The fuel was wet straw, because the Montgolfiers believed that it was smoke, not heat, that caused a balloon to rise. And because they weren’t sure whether humans could survive at high altitudes, the first passengers were a sheep, a cockerel and a duck. “French journalists being what they were then, all three published accounts of the journey,” Mr. Holmes said. 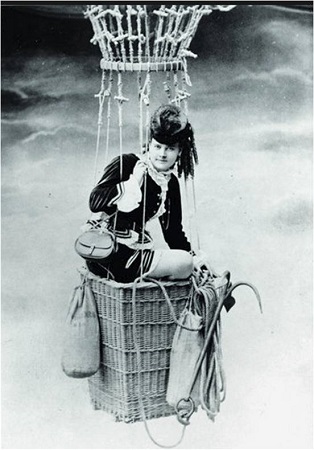 Once it became clear that balloon flight was not inherently life threatening and could even carry someone across the English Channel, people rushed to think of practical uses for balloons. One of the most inventive was Benjamin Franklin, who thought that balloons could be used to ferry troops and also imagined something he called the “running footman,” a servant suspended from a small balloon who could cover great distances in leaps and bounds. “You picture him flying over a hedge and then landing on your lawn with the tea tray,” Mr. Holmes said. 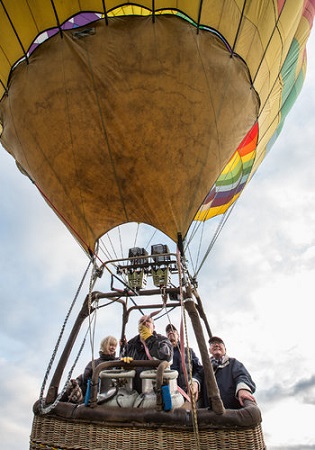 The great scientist Joseph Banks, who was one of the main characters in Mr. Holmes’s last book, “The Age of Wonder,” about science and Romanticism, predicted that balloons would one day replace shipping. “He made the great mistake, which is to think that a balloon will take you from A to B,” Mr. Holmes said. “In fact, they take you from A to X — you never know quite where.”

Chris Healy, Mr. Holmes’s pilot that morning, acknowledged as much, pulling on a handle above his head and shooting another jet of flame up into the canopy. He has been flying balloons here for almost 30 years, he said, and knows the area pretty well, but he wasn’t sure yet exactly where the balloon he was piloting would come down.

Mr. Holmes nodded and pointed out that the invention of the railroad emphatically ended the balloon’s future as a form of commercial transport. In the Civil War, the Union Army used balloons as observation platforms, however, and during the siege of Paris in 1870, balloons carried mail from the cutoff city to the rest of France.

But by now, except for a few scientific uses, the hot-air balloon (though much safer and more efficient, thanks to the invention of the propane burner in the 1960s) has pretty much returned to its original function as a means of lifting people off the ground so they can see the world anew. Pleasure ballooning has become popular in America, and an annual festival in Albuquerque attracts hundreds of balloons and balloonists.

Mr. Holmes quoted from Alexandre Charles’s rapturous account of his solo ascent to 10,000 feet in December 1783: “I could hear myself living, so to speak.” And he pointed out that though we’re used to flying in airplanes now, the world really does look different from a balloon. From aloft, it is much clearer than it is from the highway, for example, that suburbia is creeping into Orange County. Ranch houses, their swimming pools buttoned up for the winter, abutted farm fields stretched out like a quilt below. A cluster of homes in one development circled a lake where, as the balloon’s shadow passed over, an annoyed great blue heron stretched its wings and flew off. 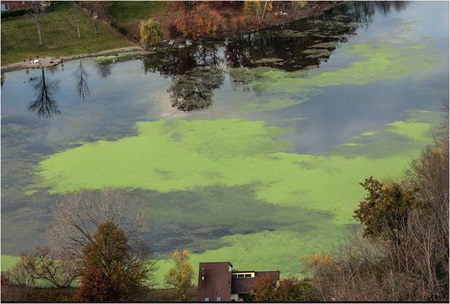 A dog barked, and Mr. Holmes remarked that while dogs probably didn’t see well enough to spot a balloon from a distance, they were alert to the sound. John Wise, a pioneering American balloonist who in 1859 flew from St. Louis to the Canadian border, used what he called a “dog test” to assist in navigation. Leaning over the basket, he’d shout and then listen. One bark meant he was passing over a farm, a couple of barks indicated a town, and no barks proved he was in the middle of nowhere.

Even by Mr. Holmes’s standards, “Falling Upwards” is a buoyant book, ballasted by chatty footnotes, and it displays a particular affection for the many women who were drawn to ballooning, often as performers who would do trapeze stunts while aloft, flashing a little leg for the onlookers below and then parachute down. Sailing over Wawayanda, southwest of Middletown, he retold the story of Sophie Blanchard, an early-19th-century French balloonist who specialized in nighttime ascents and fireworks displays. She used to wear white dresses and plumed hats for visibility, Mr. Holmes said, and she rode in a tiny gondola that resembled a Champagne bucket. She died in 1819 when her balloon caught fire and, after getting tangled in the rigging, she fell to the street. “She had such courage,” Mr. Holmes said, adding that on the ground it was a different story: even the noise of carts would frighten her.

Every balloon flight is a three-act drama, Mr. Holmes writes in “Falling Upwards.” There is the launch, the flight itself and the landing, “the least predictable, most perilous part of any ascent, which may bring triumph or disaster or (quite often) farce.” His own flight that morning ended in a bit of suspense. Mr. Healy had been drifting westward a little faster than he anticipated, and because he gave his crew the wrong directions over the radio, the chase truck temporarily lost sight of him. He landed on a downslope in a field he had never used before, and the basket bounced lightly, swayed and bounced a couple of times before coming to rest, as he waited for the crew to catch up and deflate the canopy.

But Mr. Holmes pronounced it a very smooth landing, much better than one he made a few years ago in Norfolk, England (where he lives with his companion, the novelist Rose Tremain). It was getting dark that day, he recalled, and the pilot almost brought the balloon down in the middle of a field of squealing pigs. He said that in the early days, farmers were not fans of balloons, which were always smashing through fences and digging up fields. In 1785, Letitia Sage, a well-known actress, took off from London with the Italian balloonist Vincenzo Lunardi and crash-landed in Harrow on the Hill, tearing up a hayfield. Some boys from the nearby Harrow school came to her rescue, took up a collection among themselves to pay off the farmer, and carried her off to the nearest pub. “She returned home quite late,” Mr. Holmes said, “and I’m afraid rather drunk.” 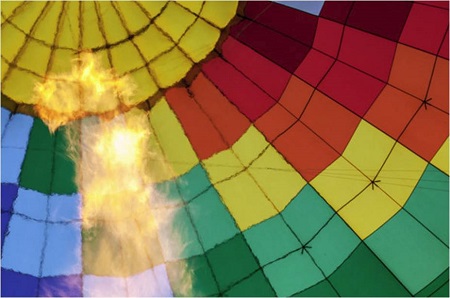 A propane-fueled flame heats the air in the balloon before takeoff, causing it to expand. “I like to say that my heart leaps up when I behold a dragon in the sky,” Mr. Holmes said, repurposing a poem by Wordsworth, one of his favorite writers.
Photo: Tony Cenicola/The New York Times

In Norfolk lately, ballooning has become quite popular, Mr. Holmes added, and he often sees balloons from his study at dusk, when they seem to him like “celestial pilot lights.” The brightness of the flame and the sound it makes has even caused him to repurpose a familiar poem by Wordsworth, one of his favorite writers. “I like to say,” he recited, “that my heart leaps up when I behold a dragon in the sky.”

Up, Up and Away in Nippy Weather

Summer is the most popular time for balloon rides, but a bird’s-eye view of fall foliage or snowy landscapes may also hold appeal. Most balloonists will not fly in rain or wind, so always ask about cancellation policies.

This entry was posted in Hot Air Balloons and tagged Hot air balloons. Bookmark the permalink.