The Physics of the Macy’s Thanksgiving Day Parade Balloons

Posted on November 29, 2015 by LighterThanAirSociety 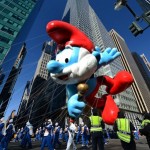 Have you ever seen a child with a balloon? It’s fun to watch. Kids pay attention to the world around them: They know that when you let go of something, it falls. Balloons don’t follow these rules, and it’s that exception that makes balloons so fascinating.

But what about adults? We still love seeing things that don’t seem to follow our normal rules. Parade balloons seem to cheat physics in order to move through the sky. Of course, they aren’t cheating physics. It is because of physics that they are able to float.

Why Doesn’t the Balloon Fall?

There is indeed a force pulling down on these massive balloons. This gravitational force is proportional to the mass of the object. Both the outer material and the gas within have mass that results in a weight of perhaps 2,000 Newtons (450 pounds). Yet even with so great a downward force, the balloons stay aloft. There must be an upward force at work on the object. This is buoyancy force, and it is caused by a differential air pressure on the top and bottom of balloon. 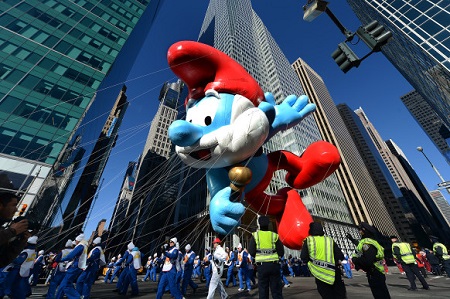 You can think of the air as a bunch of balls bouncing around. When these air-balls hit a surface (like the side of a balloon), they bounce off. Since the ball changes momentum, it must be pushing against the balloon with some force. This force then depends on the number of air-balls that hit the surface as well as the speed and mass of the air-balls. But here’s the cool part. In order for all these air-balls to not just fall down on the ground, they must have more collisions in the upward direction than the downward direction. This means that as you go lower in the atmosphere, the density of air increases, resulting in greater pressure.

But how much does this air push on an object like a balloon? The easiest thing is to consider a block of air floating in air. Yes, that might seem silly but there is a reason for this. If there is no wind, that block of air in air should remain stationary. That means that the net force pushing on this air must be zero Newtons. Here is a diagram showing all the forces on this floating block of air. 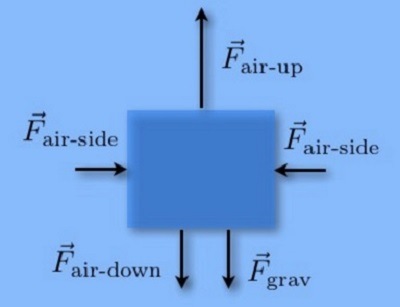 Clearly the forces on the sides of the air-block cancel. The only way to make the vertical forces cancel is if the net upward force from the air pushing on the air-block is equal in magnitude to the gravitational weight of the air. Now replace that block of air with a balloon. The rest of the air should still push on the balloon in the same way it did to the air-block. This means the buoyancy force must be equal to the weight of the air displaced by that object. Yes, this is what we call Archimede’s principle. You can use it for objects displacing water or air or anything else.

But what about a human? Does a human have a buoyancy force? Absolutely—since humans displace air, they have have a buoyancy force. Then shouldn’t humans float? No. If you consider a 75 kg human to have a density near that of water (1000 kg/m3) this would give a body volume of just 0.075 m3 and a buoyancy force of 0.882 Newtons (0.2 pounds). Even though there is a buoyancy force on humans, this is just too small compared to the weight. Of course if you switch to a much denser medium (like water), then you can float.

The only way to make giant objects float in the air is to give them small masses. The easiest way to do this is to take a thin layer of a shell and fill it with a very light gas like helium (hydrogen and hot air also work). You might think you could simply leave the interior of the balloon empty—yes, that would work. However, then you have the problem of the atmospheric pressure pushing on the balloon and crushing it. Really, the only option is to fill it with gas. Helium is better than hydrogen because it doesn’t react with oxygen like hydrogen does (big boom).

Suppose you wanted to make a Thanksgiving Day Parade for ants. Wouldn’t that be cool? Well, it would be pretty much impossible to make ant-sized balloons. It’s easier to make bigger balloons. Why? Let’s take a look at two spherical balloons where one is twice the radius of the other. 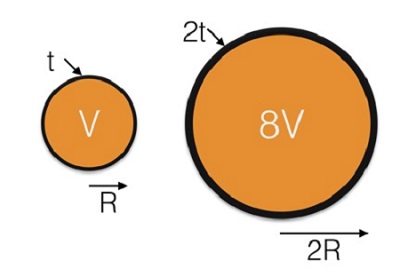 But at some point, you don’t need to keep making thicker and thicker balloon skins. I can get some material (let’s say rubber) that is very strong at just one millimeter thick. This means that if I increase the radius of a balloon by a factor of 10, the volume will increase by 1000 but maybe the mass of the shell only increases by 100. The volume is important because that’s where I get my buoyancy force from.

Now let’s go the other way. Let’s make a balloon for ants. If I decrease the radius of a regular party balloon by a factor of 100 (really it should even be smaller than that), the thickness of the shell would have to also decrease by 100. These balloons are already pretty thin. Decrease too much and you just wouldn’t have a structure capable of holding the balloon together. Increase the thickness a little bit and the mass gets too high to float. Sorry, no parade balloons for ants.

Yay! I have a giant balloon and it floats. What could be more awesome? Oh sure, I am going to need a bunch of people to hold it down (along with a couple of vehicles), but it’s still a giant balloon. But wait. Giant balloons still have problems. Making things bigger might make it easier to float but it adds other issues.

The first problem is wind. Sure, that breeze on your little hand-held balloon is annoying. But what happens when you increase the balloon size? This force pushing on the balloon is proportional to the cross-sectional area. If you double the radius of your balloon, you increase this area by a factor of four, which gives four times the air force. 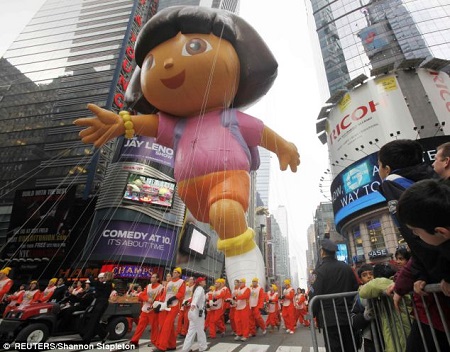 How about a quick estimate. If you take a balloon like Dora the Explorer, it is about 16 meters by 13 meters (looking at it from the side). If this were a perfect sphere with a radius of just 6.5 meters, we can estimate the air force by assuming a typical model for air drag. In a 10 mph (4.5 m/s) wind, the horizontal air force would be approximately 760 Newtons. That’s not too bad for a group of 30 to 50 adults to handle. But if you double the wind speed, you would increase the air drag by a factor of 4 up to 3,000 Newtons. Now you are getting out of control.

And here is the second problem. Out-of-control balloons are bad. You might think that it’s floating so it’s harmless, but these balloons still have mass. If a balloon uses 12,000 cubic feet of helium, that is about 55 kg of mass. Add the mass of the balloon and you easily are over 200 kg. When a 200 kilogram balloon crashes into a lamp post, the lamp post can easily topple over causing injuries (as has happened in past).

If these balloons are dangerous, how do you get them in the parade safely? There is always some risk, but it is minimized with pilot training (yes, balloons have pilots) and grounding them in bad weather conditions. This hopefully will lead to a safe and enjoyable Thanksgiving parade.