The Forgotten Sport of Balloon Jumping

Posted on May 20, 2016 by LighterThanAirSociety 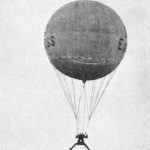 For some reason this bizarre pastime never really took off.

It is the 1920s, and you are standing in an open field. There are no sounds, other than the rustle of buffeted leaves and the faint notes of lark song. The summer sun warms your face. As the breeze brushes past, you break into a run and launch yourself into the sky.

You’re flying through the air, impossibly, yet possible because the enormous helium-filled balloon to which you’re harnessed is dragging you with it as it soars hundreds of feet. Farms, forests, and meadows are stretched out below as you float over the landscape, legs dangling high above baffled farmers and terrified cows. Gradually you tail into a gentle descent, landing lightly on your feet. You scan your surroundings for where to go next as the balloon tugs on the ropes. You decide the sycamores to the west look like sport and bound towards them like a lunar explorer, leaping up to a branch before springing from bough to bough and sailing right over a tree. You feel like Peter Pan. Suddenly, the world is small and life is limitless . . .

It should have been revolutionary. “How would you like to own your own hand-power jitney balloon,” cried Popular Science in its April 1923 edition, “to spend your Saturday afternoons joyriding in the sky, up a thousand feet or so, swinging beneath the round belly of a small gas-filled bag and traveling anywhere you can induce the playful breezes to take you?”

The “jumping balloon” or “hopper balloon” was the invention of M. Q. Corbett, W. E. Hoffman, and C. F. Adams of the “lighter than air” division of the US Army based at McCook Field, Ohio. Consisting of a giant air bag attached by ropes to a wooden bench, the devices were initially used by maintenance workers as cheap tools for inspecting the outer surfaces of large airships and hot air balloons and carrying out repairs.*

As their use spread, people began to imagine how the personal balloons could be used for fun. The claim that only minimal training was required to operate them caused particular excitement, prompting visions of businessmen balloon-jumping their way to work and schoolboys raining from the sky.

“How helpful this sort of thing would be,” said the July 19, 1927, edition of Missouri’s Joplin News Herald, envisioning the sport as an aid for climbers and the elderly. “We could strip the spring cherry tree without endangering our legs. We could dispense with elevators and enter our offices on the third or fourth floors by merely leaping up to the window and crawling in. We could do a thousand and one things easily that we now do with difficulty.”

The perceived ease of use was down to the simplicity of the controls: altitude was gained simply by leaping into a mild to mid-strength wind; and, unlike hot air balloons, there was no need to shed ballast or vent gas, because it was carefully ensured that the weight of the balloonist slightly exceeded the pull of the balloon—thus the chances of disappearing into the stratosphere were minimized. The bag itself was roughly 18 feet in diameter and capable of holding 3,000 cubic feet of hydrogen or helium gas. The latter was preferred by most of the aeronauts because it allowed them to light up a cigarette midflight.

Among the admirers of the nascent sport was Sir Arthur Conan Doyle, who followed its development with interest, having previously floated (forgive me) the idea of using small balloons or “hydrogen knapsacks” to help lighten pedestrians. 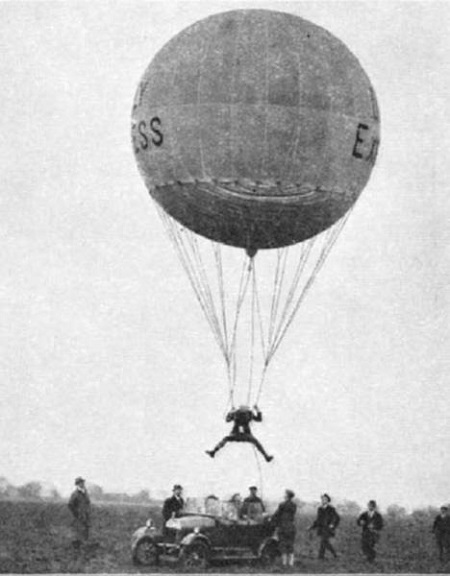 You, too, can clear vehicles in a single bound! (Photograph originally appeared in Scientific American).
Image: Air and Space Magazine.

The January 1927 issue of Science and Invention magazine reported a balloon jumping demonstration in England, declaring its hope that this pastime would soon take the United States by storm, and dreaming of the format competitive events could take:

Races with balloons of this sort would undoubtedly be great fun and the danger would be very slight. Obstacle races of course would be the most fun because you then bring the advantages of the balloons into full play. We hope to soon see this sport developed by some American balloon manufacturer in this country.

Frederick S. Hoppin, writing for the August 1927 issue of Forum, described the sport as requiring very little practice to master, and being relatively safe:

The tradition of the dangers of the large balloon has made men provide the jumpers with all kinds of safety devices—bags of sand to further balance the upward pull of the balloon, safety catches to enable the jumper to slip easily out of the harness if, on landing, a sudden gust of wind begins to drag him along with it, and even a rope around the waist attached by its other end to someone on the ground, to keep the jumper from being turned by too strong a gust into the tail of a runaway kite.

However, despite its potential as the transportation of tomorrow and its supposedly low-risk operation, balloon jumping was in fact incredibly dangerous, even for the aeronautical experts pioneering the sport. One such trailblazer was Aircraftman “Brainy,” as his men called him, Dobbs, a British parachutist in the Royal Air Force. “A parachute,” Dobbs would advise his trainees, “must be so simple that even the highest officer in the Royal Air Force can understand it.” Dobbs was a huge fan of balloon jumping, and performed demonstrations to try to kindle public interest. In March 1927, Dobbs was practicing “balloon hopping” at Stag Lane Aerodrome in North London. A nearby officer, Captain Blacker, noticed that Dobbs’s leaps were taking him nearer and nearer to a high-tension cable. “For God’s sake, take care,” he shouted. “Those are live wires.” Dobbs replied, “I’ll risk it,” and proceeded to jump. He did nearly clear the electrified cables, but unfortunately his feet became entangled, and when he tried to extract himself by grabbing one of the wires he was blown to the ground in a hail of sparks, dying instantly.

Alas, balloon jumpers never quite managed to refine the sport to a level of safety below “frequently lethal,” and when stories such as Dobbs’s hit the headlines, its popularity was short-lived. Seen in its age of groundbreaking aeronautical innovation and aerial daredevilry, it isn’t hard to understand how balloon jumping came into existence, how thrilling it must have been to have the sky open up as a new world to explore. And today, when one finds oneself wedged between sweating strangers in an airless train carriage, it isn’t hard to sense the excitement it must have offered its devotees, or feel the regret that it never quite took off.

* They were also useful for emergency deployment: when the stratospheric balloonist Georgy Prokofiev attempted a second launch of the doomed USSR-3 project on March 16, 1939, the giant aircraft failed to escape its safety net, and two men in hopper balloons were sent to free it from the tangled mess. While doing so, one of the would-be rescuers lost his balance and fell from his vehicle, catching hold of a rope dangling from USSR-3 to save himself. Despite the heroic efforts of the hopper balloonists, disaster struck as the USSR-3 reached an altitude of 1,200 meters. A valve was torn open, and the gigantic gas bag crashed in the woods halfway between Kuntsevo and central Moscow.

This entry was posted in Balloons, Hybrid Airships and tagged balloon jumping. Bookmark the permalink.