Posted on November 26, 2017 by LighterThanAirSociety

The statue – made by the sculptor of the Statue of Liberty – paid tribute to a flock of 19th-century war heroes.

People who wandered through Paris’s Porte des Ternes in the early 20th century were treated to a bronze-cast slice of sky in the middle of the city: a monument about 30 feet tall, depicting a hot air balloon rising into the sky and surrounded by three pigeons, wings outstretched.

It was clearly an arresting sight. In photos like the one above, pedestrians, bicyclists, and horse-drawn carriage riders cluster around the statue, as if drawn to this more whimsical form of transport. Some gaze upward after the balloon, as it evades a crowd of outstretched hands. Others stare at the eight additional pigeons perched on the statue’s pedestal, as if they expect them to up and fly away.

These birds, though, were bronze as well, and weren’t going anywhere. In fact, the monument was partly dedicated to them. Sculpted by Frédéric Auguste Bartholdi, today famous for designing the Statue of Liberty, the “Monument des Aéronautes du Siege” paid tribute to some lesser-known French military heroes: the hot air balloon pilots who delivered mail from Paris to the rest of France, and the homing pigeons who flew the replies back to the capital. 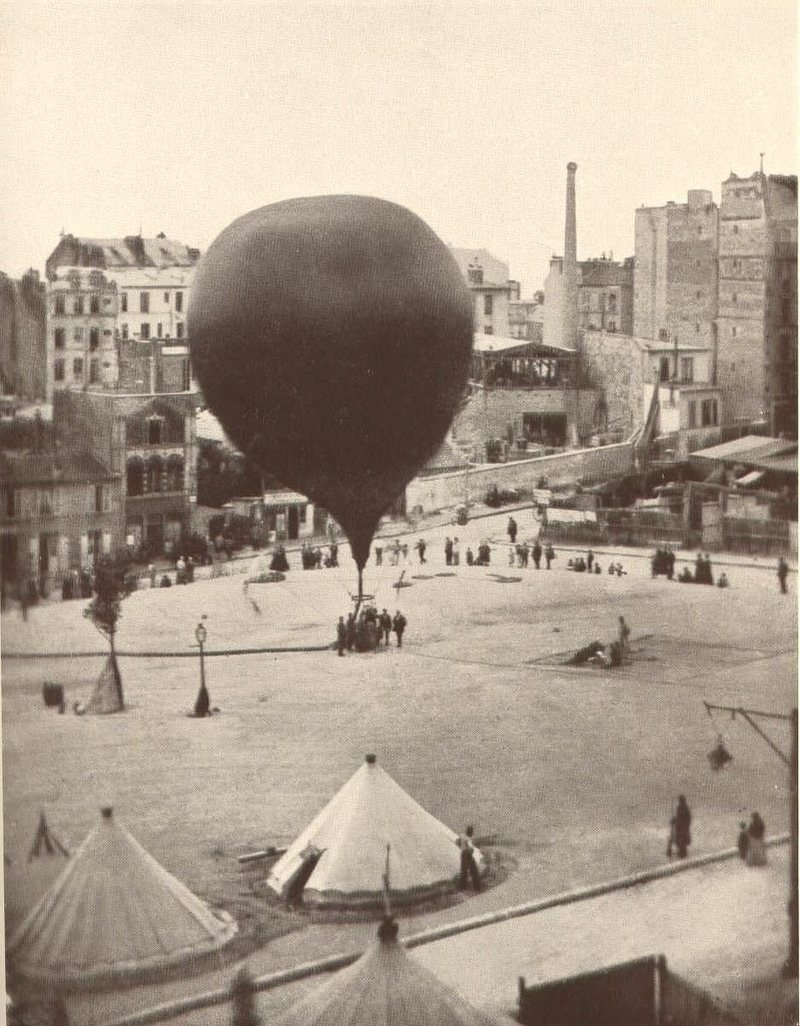 A mail balloon takes off from Paris in September of 1870.
WikiCommons/Public Domain

The events that inspired the monument took place a few decades before its creation, during the Franco-Prussian War. After France declared war on the Kingdom of Prussia in July of 1870, Prussia immediately joined with other German states and went on the offensive. In mid-September, after two months of gaining steady ground, the German armies began marching on Paris from three sides. By September 19, they had successfully cut the city off from the rest of France, beginning what would come to be known as the Siege of Paris.

This was certainly a tactical decision on Germany’s part: the Parisians were cut off from food and other supplies, eventually resorting to dining on rats, cats, and zoo animals. But it was also a demoralizing move. In the words of Denis Bingham, who rode out the siege, the troops who had surrounded the city were “determined to allow us to fry in our own gravy.” He pointed out one example: all the local theaters had closed, he wrote, because the actors had enlisted. Plus, he asked, when soldiers were encamped all up and down the Champs-Elysées, “Where is the Parisian to take his walks?”

Anticipating these problems, the trapped Parisians immediately began scrambling to get in contact with the rest of their country, not to mention the world. Every attempt, though, saw the German army one step ahead. All the aboveground telegraph lines had been severed, as had the secret cable installed at the bottom of the Seine. Couriers sent across enemy lines were captured or turned back. Eventually, the people of Moulins even tried floating messages down the river into Paris, encased in capsules made of zinc, but none of those made it, either. And while hot air balloons could get out of the city, their limited steerability meant that it was difficult to fly them back in. 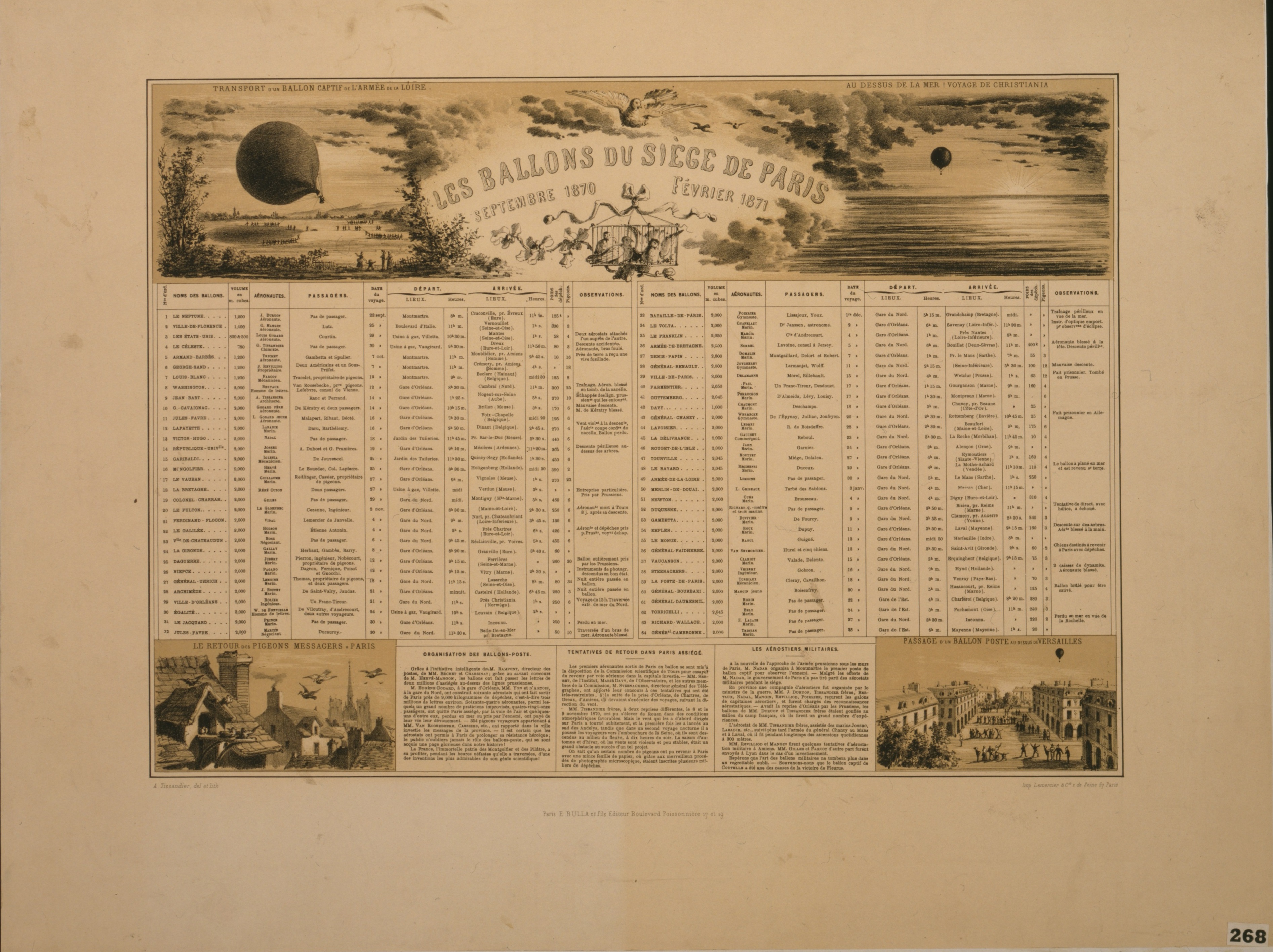 This broadsheet, illustrated with various pigeon scenes, details all the balloon trips taken during the Siege of Paris.
Albert Tissandier/Library of Congress/LC-USZ62-12733

Thus stymied, a few people began discussing a different idea. If balloons could get mail out of Paris, why not stock them with something that could reliably return, like dogs or homing pigeons? While this idea had been laughed out of at least one government office earlier in the war, as the days of the siege ticked on, its appeal grew. As the philatelist J.D. Hayhurst details in “The Pigeon Post into Paris,” after a team of sheepdogs flown out in this way disappeared with their mailbags into the French countryside, the government decided to go for the birds.

And so, on September 25, a balloon called La Ville de Florence took off from Paris, carrying one pilot, three pigeons, and about 700 pounds of mail. The aircraft floated west over the enemy encampments, and landed 18 miles away in Vernouillet. The pilot then wrote three notes detailing its safe arrival, tied the notes to the pigeons’ tails, and set the birds free. By sunset, two of them had safely returned to their Paris loft, messages in tow.

After this successful test run, the pigeon post took off in earnest. The city’s main pigeon-fancying society, L’Espérance, lent its birds to the cause, and even began sending its (human) officers along on flights to lend their know-how. (This was no small undertaking, as the German Chancellor had decreed that all captured aeronauts be considered spies, and shot from behind.)

As Hayhurst explains, the pigeon-fanciers’ expert input, along with trial and error, led to the development of a set of best practices. After the balloons landed, the pigeons were taken to Tours, where a group of ministers and diplomats had created a temporary governmental outpost. Birds that were deemed fit to fly would be loaded up with official dispatches, printed via microphotography, so that scores of messages could fit on a single sheet about the size of a business card. The sheets were then rolled up, put in metal tubes, and tied to the pigeons’ tail feathers with waxed thread. Each pigeon could carry a dozen or so of these tubes.

A medal commemorating the pigeon post. A balloon can be seen in the background.
Berlin-George/CC BY-SA 4.0

Next, the pigeons were sent by train to the closest safe takeoff spot: usually Bloirs, about 100 miles from Paris. From there, they’d fly for their lives, dodging enemy bullets and navigating through snow and fog. (One British correspondent even reported that the German army had trained falcons to hunt them down.) If they made it through to their lofts, postal clerks took them to the main post office, where the microfilm was removed, unrolled, and magnified onto the wall via a Megascope. Clerks then copied the messages down and mailed them to their intended recipients through the local city post, which was still running. Where the form said “Reçu par voie,” they wrote “pigeon.”

At first, this method was reserved for official correspondence. But as Ashley Lawrence writes at Micscape, in early November—after the Delegation adopted a new printing practice that shrunk letters down even further—the pigeon post was opened to the public, although dispatches were limited to 20 words. Immediately, worried family members, friends, and business partners began sending tweet-sized messages into the city, notifying Parisians of their whereabouts, asking after their welfare, and dealing with various quotidian matters. Overall, by the count of the telegraph master, 95,581 separate messages were sent.

It wasn’t all happy returns, though. The winter of 1870 was unusually cold, and plenty of pigeons didn’t succeed in their journeys. (At least one human didn’t, either: pigeon-fancier M. Nobécourt ended up imprisoned for five months after his balloon crashed, and his captors added insult to injury by sending his six pigeons back with fake messages.) Even if everything went well, the pigeon postal process often took forever. Lawrence traces one note, sent by a woman in London to her husband in Paris, and shows that it didn’t get through for 48 days.

Still, it was much, much better than nothing. Illustrations show pigeon arrivals greeted by Parisian crowds with arms outstretched, and Bingham’s diary describes the city’s chins rising a bit at the news, brought by a pigeon, that “the heroic defense of Paris is the admiration of the whole civilized world.” “The birds have become sacred to all patriots,” he wrote.

The Siege of Paris ended in late January of 1871 with the arrangement of an armistice, and although both civil and international conflict in the region would continue for years afterward, this particular pigeon service was no longer needed. Birds with known provenance were returned to their owners, and the rest were auctioned off.

Although Bartholdi originally came up with his monument in 1878, for a Siege of Paris memorial contest sponsored by the city, he didn’t win. (The judges instead chose a statue by Louis-Ernest Barrias, whose conception was much simpler, and included zero pigeons.) Bartholdi’s design lay dormant until the early 1900s, when a local aeronautics club managed to raise enough money for its construction by selling facsimiles of messages sent by pigeon-and-balloon post.

In January of 1906—35 years after the armistice—the completed statue was unveiled at the Porte des Ternes. Bartholdi had died two years before its completion, and the statue itself only survived for a few decades: in 1941, during World War II, occupying German troops melted it down.

A scale model, cast by Bartholdi for the Paris Salon of 1904, did survive. It stands about a foot and a half tall, perhaps a better size for avian viewers. But next time you see a pigeon walking down the street with its chest puffed out, remember: if things had gone a little differently, he’d be able to perch on a monument made specifically to honor his kind.