Posted on January 28, 2016 by LighterThanAirSociety 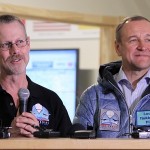 It has been a year since two pilots from the U.S. and Russia lifted off from Japan with the aim of flying farther and longer in their gas balloon than anyone in history.

They did it, and a documentary about their record-breaking flight across the Pacific Ocean will premiere Feb. 6 in Albuquerque.

The city and the Anderson-Abruzzo Albuquerque International Balloon Museum produced the film, which was compiled from hours of video gathered before and after the Two Eagles flight.

The filmmakers said one of the challenges was the shortage of footage from launch preparations in Japan and the flight itself.

Pilots Troy Bradley and Leonid Tiukhtyaev took photos and video while aloft, but much of the material was lost when they touched down just off the coast of Baja, Mexico. Some of the team’s memory cards were rendered unreadable after being exposed to the salt water. 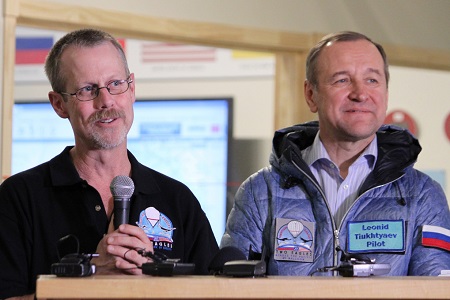 In this Feb. 2, 2015 file photo, pilots Troy Bradley, left, and Leonid Tiukhtyaev discuss their record-breaking gas balloon flight across the Pacific Ocean during a final debriefing at mission control in Albuquerque, N.M. A documentary on their flight will premiere Feb. 6, 2016 at the KiMo Theatre in Albuquerque.
Photo: AP/Susan Montoya Bryan

Bradley has previewed the film.

“It was really nice because I got a totally different perspective than from where I was at,” he said. “There’s a lot of filming within the command center, the crew once they arrived in Mexico before we landed, a bunch of stuff I had never seen.”

Filmmaker Bert Johnson said for the parts where footage was sparse, the crew used the best resources available: Bradley and Tiukhtyaev.

“After all, they lived it,” he said. “This is the story of their adventure, told by them.”

The flight ended just after sunrise on Jan. 31, 2015, when the Two Eagles balloon touched down a few miles off the coast, about 300 miles north of Cabo San Lucas, Mexico.

The pilots will be in Washington, D.C., in March to accept the Harmon Aeronaut Trophy from the National Aeronautics Association. They’re also in the running for some of ballooning’s other prestigious awards.