Posted on March 5, 2014 by LighterThanAirSociety 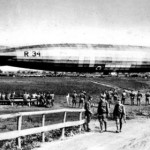 She was the majestic airship built in Renfrewshire to aid the First World War effort – but this lady arrived a little too late to the party.

The colossal R34 airship was built by William Beardmore and Company Ltd in Inchinnan, with construction beginning in late 1917. The 643ft craft was completed just over a year later. But the war had ended in November ’18.

So the R34 never saw active service and was destined instead for a future as a transatlantic passenger vessel, although that role was also sadly short lived. 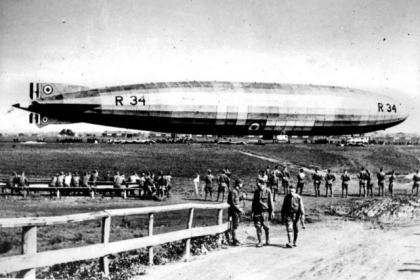 The R34 arrives in Long Island in the United States after crossing the Atlantic in 1919.
Source: Glasgow Evening Times

The National Museum of Flight at East Fortune, in East Lothian, is home to the most comprehensive exhibition of the R34.

It even features a simulation which allows visitors to attempt to pilot the ship.

Included in the exhibition is the original nose cone from the R34 and a host of other artifacts.

Ian Brown, assistant curator of aviation at the National Museum of Flight, said: “The R34 was a copy of a German zeppelin called the L33. The Germans were far ahead of what we had as far as airship design was concerned. So Britain copied their ships and came up with the R33 and R34 airships.”

Designed to patrol the UK coastline in search of enemy submarines and ships, the R34 was what was known as a rigid airship. It contained 19 hydrogen gas bags enclosed in fabric sections.

After a German L33 crash landed on English soil, British engineers took inspiration from its design when building the R33 and R34.

Completed in December 1918, the R34 remained stranded in an Inchinnan warehouse until March 1919, due to bad weather.

She finally made her maiden test flight on March 14, an uneventful five-hour round trip. In May of that year she flew to East Fortune.

Ian added: “The R34 was put forward to fly over the Atlantic to America and back, the first trip of its kind. The flight was full of military personnel but the idea was that it would carry commercial passengers in the future. It flew to America, refueled and then turned round and came back.

“But it took place just two weeks after the first transatlantic flight took place in an airplane, so the R34 just missed out on that record. It was a viable means of travel but the airplane went on to be a huge success of course.”

On its return from America, the R34 was due to land at East Fortune where the crew’s families were waiting. But the flight was diverted to Norfolk – much to the disappointment of the crew.

Ian said: “The crew were not happy and when they approached Norfolk, the R34 dropped some of its ballasts. The ballasts landed on a band that was playing ‘Hail The Conquering Hero’.

“It was suggested the crew did it to show their displeasure at not being able to land in East Fortune where their families were waiting.”

Despite its successful flight, the R34 would not become a passenger craft, as planes became the long-distance travel method of choice the world over.

In January 1921, the R34 was on a test flight in Yorkshire when she was slightly damaged. She managed to land but was further damaged in a storm. The mishaps led to the decision to scrap the great ship.

Ian added: “Our exhibition at the National Museum of Flight is called ‘Fantastic Flights’ and it includes some great items from the R34. We have the world’s only airship simulator and a 5ft model of the R34. There is also the nose of the R34 which gives a great indication of the scale of the ship.”

Find out more about the National Museum of Flight’s R-34 exhibit online here.