Posted on March 12, 2018 by LighterThanAirSociety 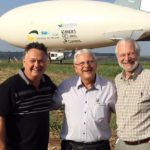 A Winnipeg man’s dream to one day see airships ferrying goods and passengers to remote communities in Canada’s north is one step closer to becoming a reality. 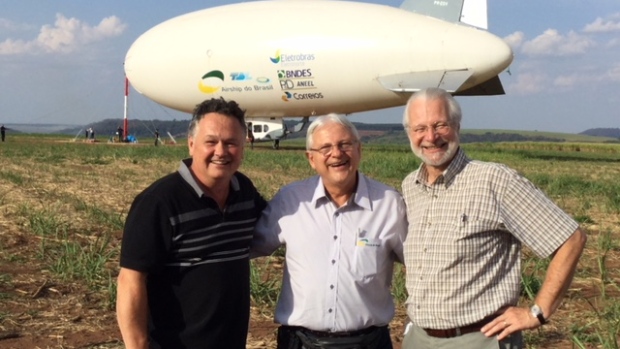 Winnipeg-based Buoyant Aircraft Systems International (BASI) has signed a Memorandum of Understanding with Airships do Brazil. In this photo Dale George, co-founder and partner in BASI, Dr. Marcelo Felippes, CEO of Airships do Brasil and BASI president Barry Prentice stand in front of an airship in Brazil.
(Submitted/Barry Prentice)

It’s something BASI president Dr. Barry Prentice has been working toward for years.

“Our plan is to work together and develop an airship that will be capable of flying in both the heat and humid environment of the Amazon, as well as the frigid cold of the arctic and everywhere in between,” Prentice told CBC News. 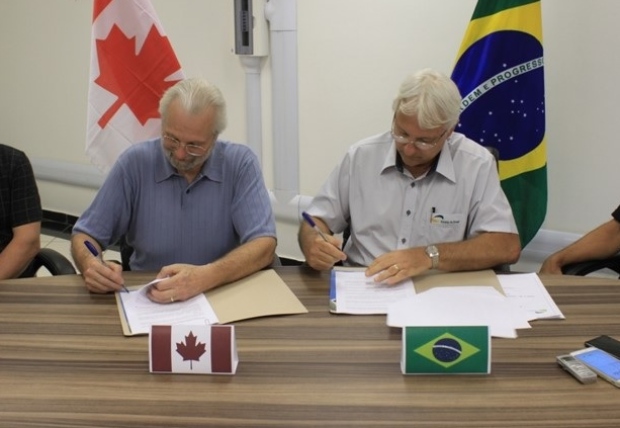 Prentice, who is also a professor at the I.H. Asper School of Business’ Department of Supply Chain Management, and his business partner, industrial designer Dale George, unveiled their first 25-metre prototype airship in 2011. The pair have working on their design ever since.

Prentice says BASI has developed a unique fuel cell technology he thinks will be able to handle trips into Canada’s cold north, and have also designed a rigid airship – different than blimps which rely on gas to hold their shape – also ideal for trips into the cold.

He says Airships do Brazil brings engineering expertise to the partnership as well as much needed infrastructure, including a full-sized, functional airship hangar dating back to the 1930s, something Prentice says is rare today. 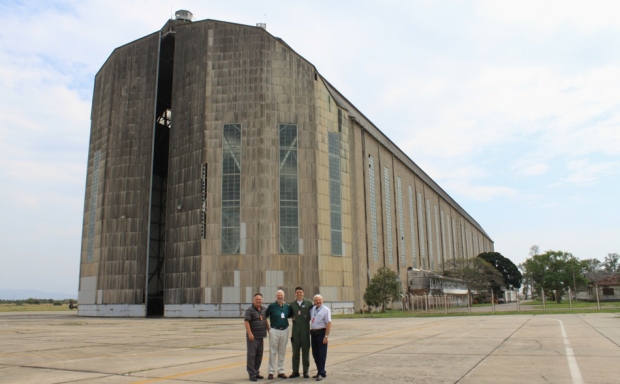 “It’s leftover from the old zeppelin days,” he said, adding the hangar is about 900-feet long and 150-feet high. “It’s large enough to build an airship that would carry 100 tonnes so this is a tremendous asset in its own right.”

The two businesses will work together and Prentice is hopeful the partnership will spearhead a cargo airship industry that will be able to serve the 70 per cent of Canada’s land mass without roads and Brazil, which has a similar percentage of land without road access.

While the first airship they’re hoping to build will use conventional fuels and be able to carry 15 tonnes of cargo, Prentice says BASI’s goal is to convert to hydrogen fuel cell propulsion, and create an electric airship, which will have zero carbon emissions.

An artist’s rendering of the BASI airship design.
(Submitted/Barry Prentice)

“It’s a sustainable means of transportation,” he said. “As carbon taxes become more important and people are more concerned about it, I think our technology will look more and more appealing.”

Prentice says an airship capable of carrying 15 tonnes could cut the costs of moving perishable goods into those remote communities in half.

He said the airships used in the 1930s were successfully flying 70 tons of cargo over the oceans, but the technology was abandoned after jet airplanes came along.

The other thing that’s changed since the 30s, says Prentice, is the technology used to build the ships.

That means structural failures are a thing of the past, he says.

“We’ve got better tools to build the airships today, and better materials.”

The Brazilian partners are planning a trip to Canada in June to meet with Prentice and George to work on the next stages of the partnership.