The USS Akron, a rigid airship that crashed in 1933, will be preserved on film

Posted on August 13, 2014 by LighterThanAirSociety 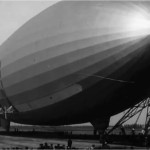 By Karen Farkas, The Plain Dealer

Films documenting the history of the USS Akron, a helium-filled U.S. Navy rigid airship that crashed in 1933, killing 76, will be preserved by the University of Akron.

The four one-of-a-kind films document the history of the USS Akron, one of the largest flying objects in the world.  They will be available to the public early next year.

Although it had a short-lived and somewhat tragic career, the USS Akron was one of the most significant airships in the history of lighter-than-air flight, and its construction, christening, maiden flight, test trials and operations are captured in the rare films that will be preserved, the university said.

Construction of USS Akron began in November, 1929 at the newly completed Goodyear-Zeppelin Airdock in Akron. 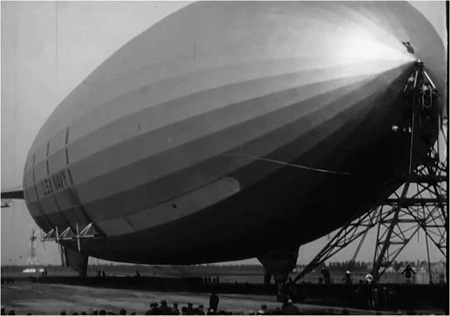 The 785-foot-long ship was christened by First Lady Lou Hoover, the wife of President Herbert Hoover, on Aug. 8, 1931, and made its first flight the next month. It was based at the Naval Air Station at Lakehurst, N.J., where it was commissioned as a vessel in the United States Navy.

The ship, which had a crew of 60, was able to stay aloft for several days and fly thousands of miles before returning to base.

On Feb. 22, 1932, as a group of congressman waiting to board for a demonstration flight, the ship broke away from its handlers and smashed its lower fin into the ground. A YouTube video shows the incident.

During a cross-country flight, at a stop in Camp Kearny near San Diego on May 11, 1932, threesailors on the ground crew were carried aloft by the ship’s mooring lines when the ship climbed unexpectedly, and two fell to their deaths in an event that was captured on film and shown in newsreels throughout America.

On the evening of April 3, 1933 the USS Akron departed Lakehurst on a mission to calibrate radio equipment along the northeastern coast.

Among the 76 persons on board were Rear Admiral William Moffett, chief of the Navy’s Bureau of Aeronautics, and Cmdr. Frederick T. Berry, commanding officer of Lakehurst.

Shortly after midnight, the ship was hit by a series of strong updrafts and downdrafts off the New Jersey coast.  While attempting to climb, the ship’s tail struck the water. With its control surfaces destroyed, the ship crashed into the ocean.

This entry was posted in Airships, Movies, News and tagged airship, University of Akron, USS Akron, ZRS-4. Bookmark the permalink.