Posted on August 14, 2014 by LighterThanAirSociety 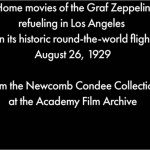 Source: The Academy of Motion Picture Arts and Sciences

The Academy of Motion Picture Arts and Sciences (oscars.org) has posted a home video taken of the Graf Zeppelin during the 1929 visit to Los Angeles to their YouTube channel.

The Academy Film Archive included the following article with the video:

In August 1929 the Graf Zeppelin made its historic circumnavigation of the globe. The enormous airship, measuring 776 feet in length, took off from Lakehurst, New Jersey and flew to Germany, then Tokyo, on to Los Angeles, and back to New Jersey. The trip around the globe took 21 days, including the three stops, with a flight time of 12 ½ days. Enthusiastic amateur filmmaker Newcomb Condee joined over 100,000 people who flocked to see the Graf Zeppelin while it was moored for refueling at Mines Field in Los Angeles, now the site of Los Angeles International Airport. While most of the spectators had to content themselves with distant views of the airship, Mr. Condee managed to obtain a press badge, which allowed him to walk right up to the zeppelin and film this impressive silent footage with his 16mm home movie camera. Mr. Condee, a lawyer who would eventually become a judge in the Superior Court of Los Angeles County, can first be seen in the footage joking with armed National Guardsmen patrolling the airfield.

As we celebrate the 85th anniversary of the Graf Zeppelin’s remarkable feat of aviation, the Academy presents the four-evening series “Hollywood Takes to the Air” (http://www.oscars.org/events-exhibiti…). The Academy’s celebration of cinema and aviation kicks off with “Illusions of Flight: Behind the Scenes of Hollywood’s Aviation Classics”, with program hosts Craig Barron and Ben Burtt. The celebration will continue with screenings of aviation-themed films, featuring short introductions about the making of the films by hosts Craig Barron and Ben Burtt. Airplane miniatures and other production materials from classic aviation films will be on display in the theater lobby throughout the weekend.

The Academy Film Archive invites you to post your comments with information about the Graf Zeppelin’s visit to Los Angeles to the “Comments” section on their YouTube page: www.youtube.com/watch?v=7oPnhXVBK1A

Source: The Academy of Motion Picture Arts and Sciences