Posted on December 7, 2016 by LighterThanAirSociety 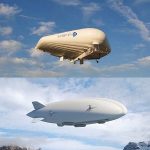 Solar Ship has challenged Lockheed Martin to an intercontinental race, to pitch the two companies’ airship designs against each other and promote the benefits of using lighter-than-air technology for cargo transport.

The Canadian manufacturer is proposing that its Wolverine solar-powered aircraft fly against Lockheed’s hybrid airship, during a “friendly race” that will cover two legs.

The first, 1,890km (3,500km) leg from Johannesburg, South Africa to Kampala, Uganda, would see the two aircraft travel along the “peace and freedom route”, at the same time promoting the long-term benefits the technology could have in the Great Lakes region of Africa. Solar Ship claims this is one of the most expensive transport routes in the world.

The second leg would see them fly 22,000km from Lockheed’s Palmdale, California facility to the Arctic, and then south across Africa.

“The purpose of the challenge is to promote the benefits of hybrid aircraft which use two forms of lift: buoyancy like an airship and dynamic lift like an airplane,” Solar Ship says. “Lockheed Martin is the largest player in this space, while Solar Ship is the world leader in developing solar-powered vehicles in this sector.”

It adds that both manufacturers have been marketing the benefits of airships to connect expansive areas that would otherwise be difficult to transit using traditional methods.

“A friendly race is being proposed to demonstrate what this technology can do to overcome the barriers of moving cargo to and from remote areas,” it says. 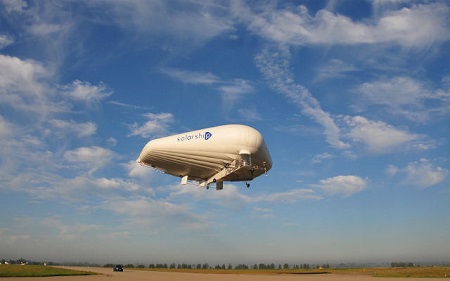 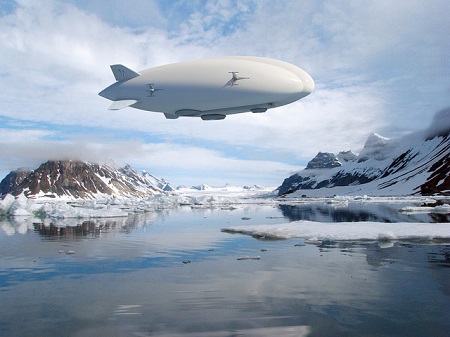 Lockheed announced in March that its LMH-1 airship had been selected by UK-based Straightline Aviation, via reseller Hybrid Enterprises, under a 12-aircraft deal worth about $480 million. In November, it was announced that Straightline had signed an agreement with a Canadian mining company to deploy the type to northern Quebec, to shuttle 21t of rare earth ore concentrate.

Solar Ship, meanwhile, announced in September that it had received an order for four of its cargo-carrying airships from Africa-based Manaf Freighters, for use during freight transport and disaster relief. The order consisted of two short take-off and landing Caracals, plus two of the larger Wolverine, which will be deployed to east and central Africa in 2017.