Skydive from blimp to mark Battle at Bristol

Posted on September 12, 2016 by LighterThanAirSociety 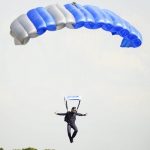 Air Force Academy cadet Jordan Glover said Saturday’s skydive into Bristol Motor Speedway will be his biggest and most exciting jump yet.

Glover and two other members of the Air Force’s Wings of Blue team will skydive from the iconic Goodyear blimp during the morning broadcast of ESPN College GameDay at the Pilot Flying J Battle at Bristol. 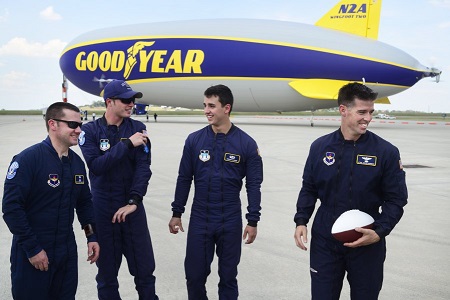 GameDay is the prelude to the much-anticipated Tennessee-Virginia Tech game, which is expected to set a college football attendance record of more than 150,000 fans.

The 21-year-old Glover, who has 509 jumps under his belt, will carry the Tennessee flag.

Everett Joiner will carrying the game ball, while Gabe Dawson will have the Virginia Tech flag in tow.

“I’m super excited,” said Glover, who got a test jump in Friday at Bristol before returning to McGhee Tyson Airport aboard Goodyear blimp Wingfoot Two. 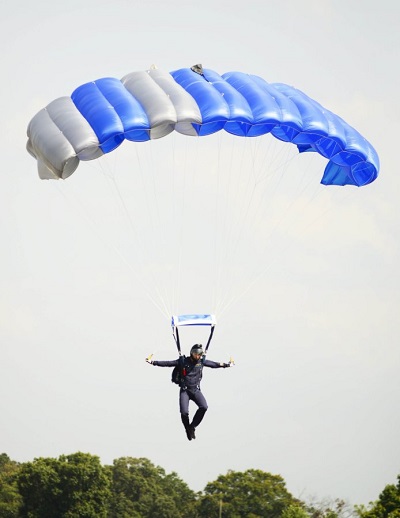 “We’ll freefall for about five seconds and be going about 70-100 mph before we pull the ripcord,” Glover said. “We’ll land outside the stadium at about 9:20 a.m. near the GameDay set.”

Goodyear historian Ed Ogden said Saturday’s jump will be the first skydive from a Goodyear blimp in 51 years.

“This (jump) was a United States Air Force request,” Ogden said. “They know that a little more than 50 years ago, Golden Knights jumped (out of a blimp) at West Point.” 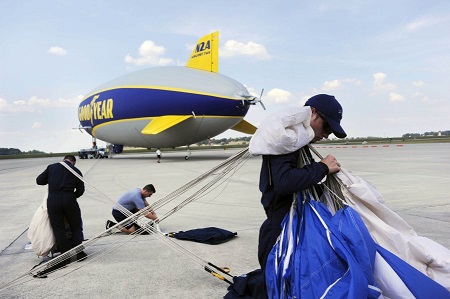 The event signifies Goodyear’s longstanding ties with the military and celebrates the grit and determination central to college football.

Goodyear blimps, which are actually semi-rigid airships, have been a common sight above sporting events for more than 60 years. The first blimp provided live aerial coverage from a sporting event at the 1955 Rose Bowl game.

“It’s the most challenging thing I’ve ever flown,” Dougherty said. “It’s kind of like flying a boat.”

Video of the jump courtesy of Goodyear: