Posted on November 2, 2014 by LighterThanAirSociety 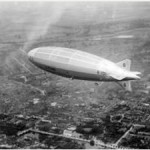 In the late autumn of 1929, little Donald Clarke posed for a photo with his brother, Reginald, in front of the R101. Little did he know then that, some 80 years later, in 2010, his family snap would have been blown up, mounted and hung on the wall in an exhibition at Bedford Museum.

Cute though the boys looked, grinning excitedly in their school caps and jackets, it is what brought them to Cardington on that day in the late autumn of 1929 that, even now, continues to fascinate and shock. 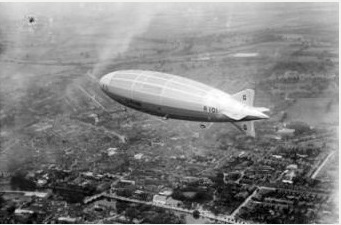 In the early 1920s travel aboard ‘luxury liners of the sky’ was thought to be the future of air travel. When, in 1916, they secured the government contract to build two airships Short Brothers, the world’s first airline company, moved their operations to Bedford. The size of population, its good rail links to London, the existence of light engineering works in the area and the fact that it was thought to lie just beyond the range of German Zeppelin air raids were all points in the town’s favor.

The famous sheds at Cardington were constructed, Shortstown was built to house the workers and throughout the 20s it was full steam ahead to develop an airship in advance of competitors that would cut the journey time of long distance travel by half. 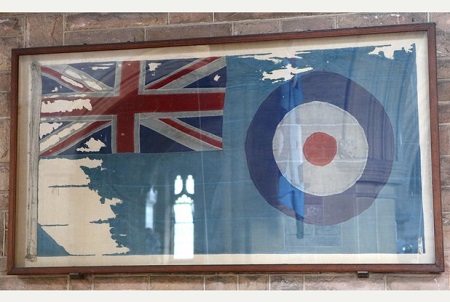 Cardington Memorial The flag that flew from the R101 airship is preserved inside Cardington Church.

The R100, though not built at Cardington, flew from there to Montreal in Canada in July 1930. There were problems but the very fact that it completed the journey there and back added pressure (piled on by the Air Ministry) to the crew of the R101 to fly to Karachi for a conference attended by the Air Minister, Lord Thomson. Final test flights were never satisfactorily completed but on Saturday October 4 at 6.24 pm the R101 took off from Cardington with 55 crew and passengers on board, made a circuit of salutation around its home town of Bedford, and then headed south towards France.

Bad weather and faulty design coupled with 5.5 million cubic feet of highly flammable hydrogen gas encased inside the stretched intestines of 100,000 oxen (yes, really) meant that, when the ship went into a nose dive, the outcome was never in doubt. 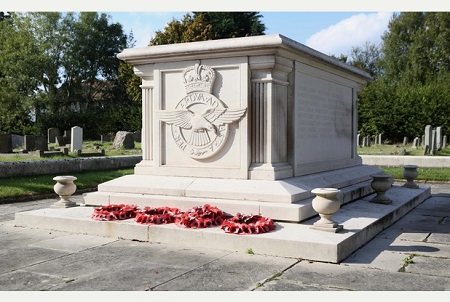 Cardington Memorial The site in Cardington where the 48 men killed in the R101 disaster are buried.

The crash at Beauvais not far from Paris, was a pretty tame affair; it was the raging fire that followed that caused the death of all but six of those on board.

It’s true that we have the benefit of hindsight but looking at photographs from the time and reading the accounts it seems crazy that the idea of airships as a means of mass travel was ever considered to be a good idea. Apart from anything else they were enormous (the R101 was 777ft in length; a jumbo 747 is only 231ft long) but there was relatively little room for passengers and they were permitted hardly any luggage allowance – although Lord Thomson still managed to load a 60kg Persian carpet on board.

Alongside haunting pictures of the young crew were recorded instances of personal heroism such as that shown by the chief cox George ‘Sky’ Hunt who survived the crash but went back in to the ship to try and rescue his great friend, the assistant cox, Wally Potter. Neither survived. And there are recollections of people such as the widow of the first officer, Noel Grabowski ‘Grabby’ Atherstone. Mrs Atherstone recounted how she knew instinctively that a tragedy had occurred because her husband’s dog Tim gave an unearthly howl at the exact moment the airship crashed.

Very little survived the fire but it is those photographs and the personal accounts from both before and after the crash that make this exhibition so compelling.

Following a lying-in-state at Westminster Hall and two memorial services at St Paul’s and Westminster Cathedrals half a million people lined the route to Euston. The same scenes were repeated along the two mile route from Bedford St John’s Station to Cardington where all 48 of the dead were laid to rest in a special communal grave.

The public inquiry that followed the crash was something of a whitewash but the industry was doomed nevertheless and the Royal Airship works soon closed with massive redundancies in its wake.

As for Donald Clarke who posed excitedly with his brother in front of the R101 all those years ago, he still lives in Bedford. And the fate of the R101 didn’t put him off the idea of flying. In 1991 he was awarded the MBE for services to the RAF. 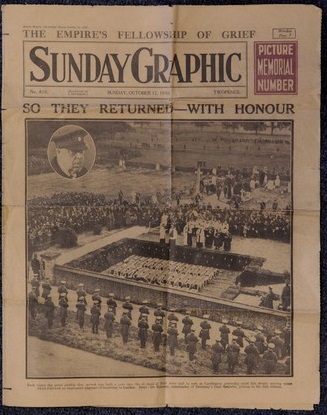 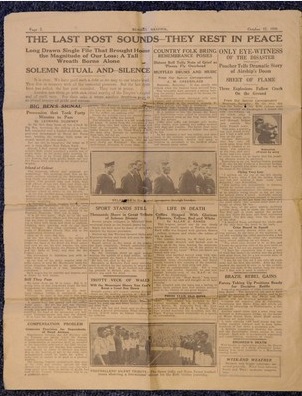 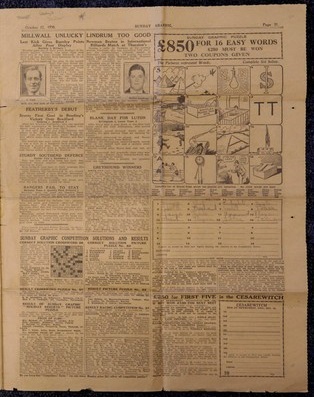 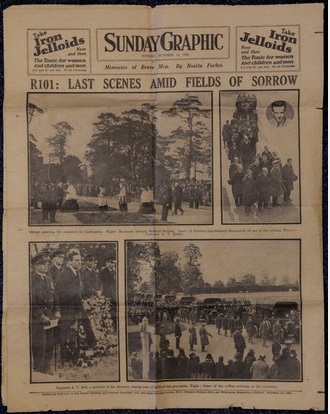