Posted on January 20, 2014 by LighterThanAirSociety 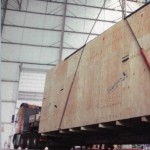 With the sale in 2011 of three Zeppelin NTs to Goodyear, the U.S. tire manufacturer, Zeppelin Luftschiff-technik GmbH & Co. (ZLT) landed the largest contract in its history. Since March of 2013, the first Zeppelin NT for Goodyear is being assembled in the USA. “The entire design and construction of the different parts and subassemblies has been done in Friedrichshafen,” said Thomas Brandt, ZLT Manager. “Thus, a substantial part of the value of the project has been created here at Lake Constance.”

The first phase of the Zeppelin NT construction was successfully completed by Goodyear at Wingfoot Lake in early June, when the longerons were assembled to form the inner structure. A time-lapse video of this phase, including the fitting of the envelope, titled “The Big Build … Goodyear Blimp NT – Moving Forward” is available on YouTube. 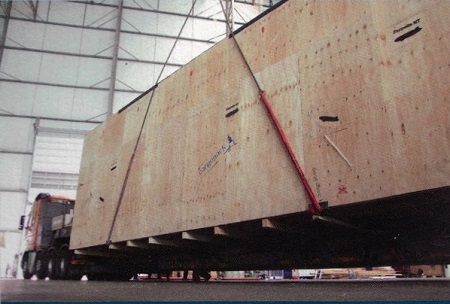 The passenger gondola for the first Goodyear-Zeppelin is safely crated and ready for transport to the port of Hamburg.
Photo: Zeppelin Brief

In October 2013, the last major shipment of components was made from Friedrichshafen to the United States. The passenger gondola was set on a transport frame designed and built for this occasion and placed inside a massive wooden crate. Due to the enormous dimensions – 11.10 meters (36 ft, 5 in) long, 3.50 meters (11 ft, 6in) high and 3.75 meters (12 ft 4 in) wide, the shipment to the port of Hamburg could only be done with special permits from each of provinces along the route. On October 18 in the morning the crate was loaded on a Ro-Ro (roll on, roll off) ship, the “Atlantic Concert”. Unlike a container ship, the cargo is not loaded by crane. It is loaded on a special trailer, pulled on board the ship and securely tied down.

The vessel sailed from Hamburg to Baltimore. From there, in early November, the specal cargo was carried to Wingfoot Lake by truck. In December, the basic assembly of the first Goodyear-Zeppelin was completed. The first flight is scheduled for March of 2014. 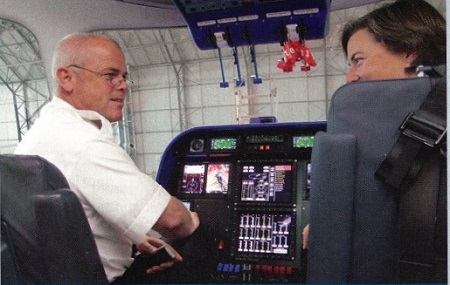 The Zeppelin NT airships built so far had all been type LZ N07-100. Through a number of design modifications and enhancements, the current version is type LZ N07-101. The Goodyear Zeppelins are the first of this new type. Among other things, the cockpit has been redesigned and includes the cutting edge of technology for the avionics. The contour of the gondola has been optimized, making 2 additional seats available without having to substantially lengthen it.