Posted on March 16, 2014 by LighterThanAirSociety 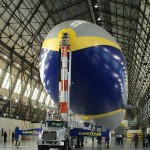 From Aerospace Manufacturing and Design:

The Goodyear Tire & Rubber Company has revealed the first example of its new airship design, created in partnership with ZLT Zeppelin Luftschifftechnik in Germany and assembled by a team of German and U.S. engineers and technicians at Goodyear’s Wingfoot Lake hangar in Suffield Twp., Ohio.

This airship is the first of a new generation of Goodyear blimps that will differ in construction, appearance, and operation from the current fleet of blimps.

Read the rest of the article on the Aerospace Manufacturing and Design website.