Posted on March 14, 2014 by LighterThanAirSociety 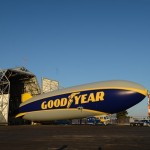 The Goodyear Tire & Rubber Company today unveiled an all-new, state-of-the-art version of its world-famous icon, the Goodyear Blimp. The new airship is larger, faster, and more maneuverable and builds on the company’s legacy as the world’s leading builder and operator of airships.

The new blimp was introduced at a media event held at Goodyear’s Wingfoot Lake hangar in Suffield, Ohio. The blimp is scheduled to begin test flights over Northeast Ohio later this month before going into service in the summer. 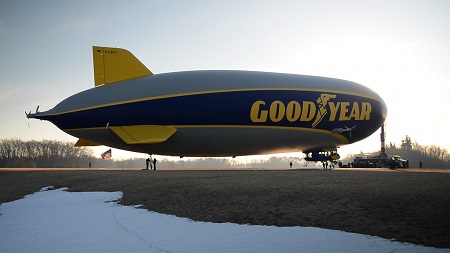 “The completion of the new blimp marks the beginning of a new era for our airship program and reflects Goodyear’s commitment to remaining at the forefront of aerial broadcast coverage and support,” said Paul Fitzhenry, senior vice president, global communications. “This airship will offer enhanced aerial television coverage capabilities, increased flight range to cover more events and an unparalleled passenger experience.”

In conjunction with the unveiling, Goodyear announced the launch of a nationwide contest to name the new blimp.

Construction of the new airship

Assembly of the new blimp began in March 2013 at Goodyear’s Wingfoot Lake hangar.  An international team of engineers and technicians from Goodyear and Germany’s ZLT Zeppelin Luftschifftechnik worked side by side to complete the build project. Parts such as the tail fins and gondola were built in Germany and shipped to the U.S. for assembly. The balloon-like body of the airship – the “envelope” – is made of polyester with an innovative film from DuPont™ called Tedlar®, surrounding a semi-rigid internal structure, which differentiates this airship from previous Goodyear blimps. 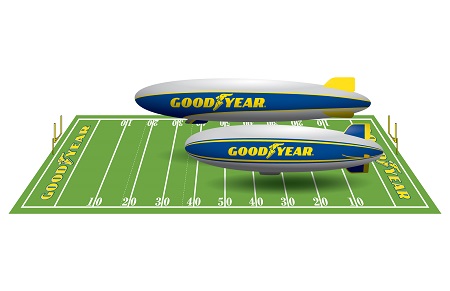 This airship is the first of a new generation of Goodyear blimps that will be different in construction, appearance, and operation than the current fleet of blimps. The new helium-filled airship is 246 feet long, more than 50 feet longer than the previous blimps and just 18 yards shorter than an American football field. The blimp features a new paint scheme while retaining Goodyear’s logo and traditional blue and yellow branding on a silver envelope. 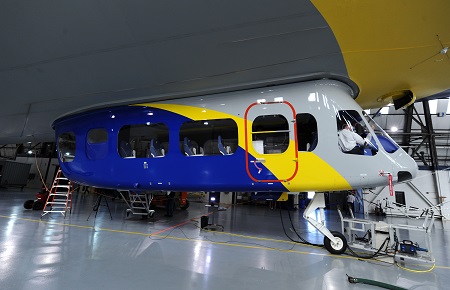 The gondola delivers an unparalleled passenger experience with seating for up to 12 passengers and with improved viewing through larger, wrap-around windows, providing sweeping panoramic views. In addition, a new interior and seating will add to the ride’s comfort. 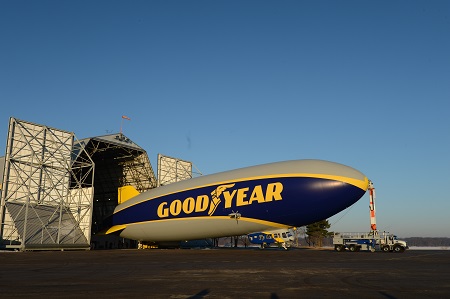 The new airship incorporates the latest in on-board avionics and flight control systems. Whereas pilots of the previous generation of blimps controlled the airships’ movements with a manual flight system in use since 1925, the new ship features custom computer-controlled avionics.  Electronic controls work in conjunction with an on-board computer to regulate engine thrust, up-and-down movement, and right-and-left movement. Tail fin operation will be controlled by a joystick device. These advancements result in more precise operation of the airship while in flight, on landing, and on take off. In addition, the new airship has a top speed of 73 miles per hour, compared to the current maximum of approximately 50 miles per hour giving the blimp greater range to cover more events.

Every Goodyear blimp needs a name and, once again, the company is inviting the public to participate in a Goodyear “Name the Blimp” contest.  Entrants over 18 years of age in the United States and Washington, DC can submit a name for the new blimp by visiting www.Goodyear.com/NametheBlimp or www.Facebook.com/GoodyearBlimp. One name will be chosen from the entries and the contest winner will join the Goodyear Blimp for a day of airship activities. In addition, nine runner-up winners will receive a set of Goodyear tires. The contest opens on Friday, March 14 at 9 a.m. EST and will close on Friday, April 4.

This will be only the second blimp in history to get its name from a consumer naming contest. The first contest was held in 2006 and featured more than 20,000 unique names. The winning name, Spirit of Innovation, was given to the airship that now operates from Pompano Beach, Fla.

Full contest rules, format, and entry form can be found at www.Goodyear.com/NametheBlimp. 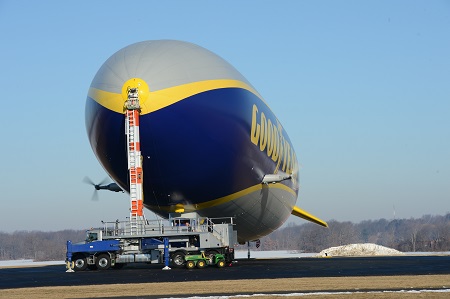 During its long operational history, Goodyear has built more than 300 lighter-than-air vehicles, including two large rigid airships – the U.S.S. Macon and U.S.S. Akron. This is the first semi-rigid airship to be built in the 95-year history of Goodyear’s Wingfoot Lake hangar. The new airship model replaces the previous “GZ-20” model that flew for 45 years.

Since 1925, the Goodyear blimps have appeared at the most watched news, entertainment and sporting events around the world. The blimps also heavily support local and national charities, and community emergency response programs.