Posted on August 19, 2015 by LighterThanAirSociety 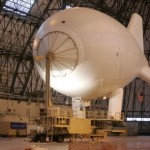 The defense contractor and city on Tuesday announced that the company will be testing a new lighter-than-air system at the city-owned airport.

The initial tests start this week with moving a mooring system and control truck to the middle of the mooring circle at the airport facility. 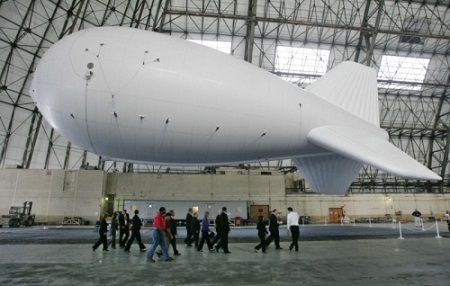 In this August 2010 file photo, politicians, Lockheed Martin officials and employees walk past one of the 17 additional aerostat-based Persistent Threat Detection Systems (PTDS) made ahead of schedule for the U.S. Army in Afghanistan before a celebration of their completion at the Akron Airdock in Akron. Three of the PTDS’s were on display for the event.
Photo: Karen Schiely/Akron Beacon Journal

The aerostat will be 115 feet in length, white and have a hull volume of 74,000 cubic feet. By comparison, Goodyear’s new Wingfoot One airship is 246.4 feet long and has an envelope volume of nearly 300,000 square feet.

Also, unlike Goodyear’s airships, the Lockheed Martin aerostat will not have a propulsion system.

Test flights are scheduled to start on Monday and will continue periodically through the summer of 2016, the company said.

“The aerostat should only be up a short period of time and then reeled back in to the mooring system,” the company said. These first flights are scheduled to conclude on Aug. 26. 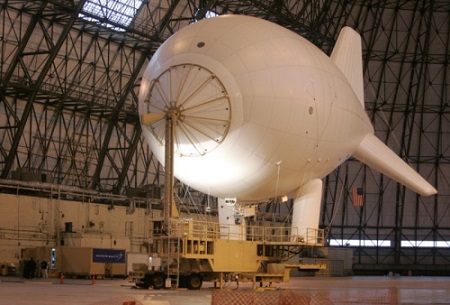 This February 2009 file photo shows the aerostat on the mooring station of the Persistent Threat Detection System in the Lockheed Martin Airdock in Akron.
Photo: Mike Cardew/Akron Beacon Journal

The aerostat will float at an altitude of no higher than 800 feet and will be out during daylight hours, the company said. The company did not say what times it expects the aerostat to be out.

“Lockheed Martin will begin periodic test flights of its latest aerostat system,” the company said in a release. “These flights will serve solely as a technical demonstration of the latest lighter-than-air aerostat capabilities.”

The company did not provide any other technical or design details on the aerostat and related equipment.

The aerostats are typically used to carry equipment for long-term surveillance. The Army has used Lockheed Martin aerostats in Iraq and Afghanistan for what is called a persistent threat detection system.

Last year, Lockheed Martin announced it will provide support for testing an aerostat system for the Department of Homeland Security along the southern border of the United States.

Lockheed Martin said it owns the test aerostat that will float over the Akron airport and that it is not for a specific military or government operation.

Lockheed Martin has moved most of its operations out of its Akron campus next to the airport off U.S. Route 224 while retaining its aerostat program at the nearby landmark Akron Airdock.