Jersey Roots: An Airship Disaster Worse Than the Hindenburg

Posted on April 4, 2014 by LighterThanAirSociety 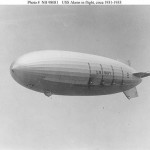 The Navy airship Akron did not meet its end in some great inferno, neither was its fate photographed by newsreel cameras, nor were the details of its demise described live over the air by a horrified radio announcer watching the human tragedy unfold in real time.

The more notorious Hindenburg crash four years later resulted in the deaths of 36 people and was the first disaster ever captured on motion picture film. What happened aboard the USS Akron, 81 years ago today on April 4, 1933, took the lives of 73 men far out at sea in utter darkness. Tossed about in a low pressure system 30 miles east of Long Beach Island, the Akron slammed tail first into the Atlantic Ocean. There were just three survivors: the executive officer and two enlisted crew members. 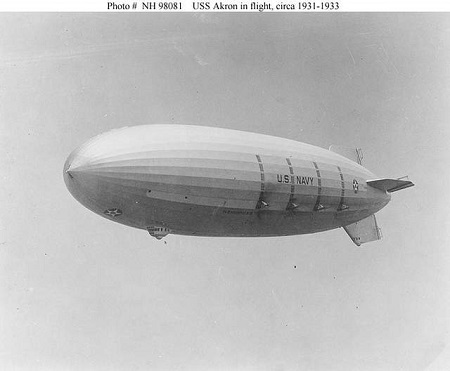 The rigid airship USS Akron in flight in this US Navy photo taken sometime between 1931 and 1933.
Photo: US Naval Historical Center.

The Akron was one of the largest airships ever built. At 785 feet in length, the helium-filled Akron was just 20 feet shorter than the hydrogen-filled Hindenburg. If turned vertically, standing on its nose with its tail pointing straight up into the air, the Akron would measure four feet higher than the Goldman Sachs Tower in Jersey City, the tallest building in New Jersey. 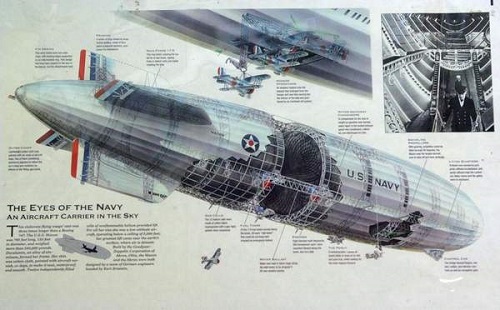 A cross-section of the USS Akron is displayed on a poster at the Navy Lakehurst Historical Society museum inside airship Hangar One at Joint Base McGuire-Dix-Lakehurst.
Photo: Asbury Park Press

According to the Navy Lakehurst Historical Society, the Akron departed Lakehurst at about 7:28 p.m. April 3, 1933, with 76 aboard including a few VIPs along for the ride. Under the command of Cmdr. Frank C. McCord, naval records indicate the Akron was en route to the New England coast to help with the calibration of radio direction finder stations there.

What happened more than four hours into the flight is best described in detail in an article about the Akron on the website airships.net, which is run by Dan Grossman, who has served as a technical adviser and on-air historian for the Discovery Channel.

He writes that over the Atlantic just after midnight on April 4, the Akron was buffeted by a series of strong updrafts and downdrafts. In poor visibility, the crew was relying on a barometric-based altimeter to determine their flight level as they tried to stabilize the ship. However, the officers in the control car might have failed to realize the drop in atmospheric pressure had resulted in a faulty altitude reading.

The Akron was far closer to the water than the crew knew and an attempt at an emergency climb on a steep angle out of a downdraft likely sent the tail of the immense Akron into the ocean, obliterating its control surfaces, Grossman writes on his website. 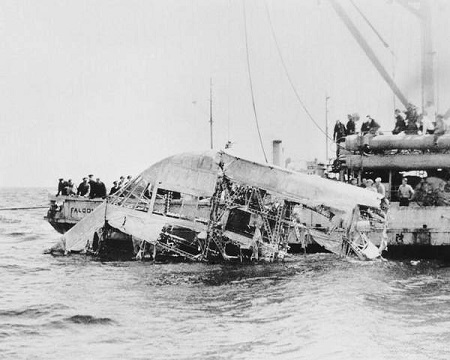 The wreckage of the rigid airship USS Akron is brought to the ocean surface about 30 miles off the coast of Long Beach Island on April 23, 1933.
Photo: Associated Press Files.

“The order was given to stand by for a crash,” said Lt. Cmdr. Herbert V. Wiley, the surviving executive officer recalled in a newsreel shortly after the disaster. “The ship hit the water within 30 seconds after the order and most of us, I believe, were catapulted into the water.”

There were no life vests or life rafts aboard the Akron. The water was frigid and 45 minutes would elapse before help arrived, Wiley recalled.