Wind Industry’s New Technologies Are Helping It Compete on Price

Posted on March 26, 2014 by LighterThanAirSociety 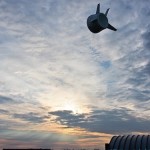 The wind industry has gone to great lengths over the years to snap up the best properties for its farms, often looking to remote swaths of prairie or distant mountain ridges to maximize energy production and minimize community opposition.

Now, it is reaching for the sky.

With new technology allowing developers to build taller machines spinning longer blades, the industry has been able to produce more power at lower cost by capturing the faster winds that blow at higher elevations. This has opened up new territories, in places like Michigan, Ohio and Indiana, where the price of power from turbines built 300 feet to 400 feet above the ground can now compete with conventional sources like coal.

And efforts to capture the wind could go even higher. In perhaps the most extreme example, a start-up called Altaeros Energies is preparing to introduce its first commercial pilot of an airborne wind turbine in Alaska. 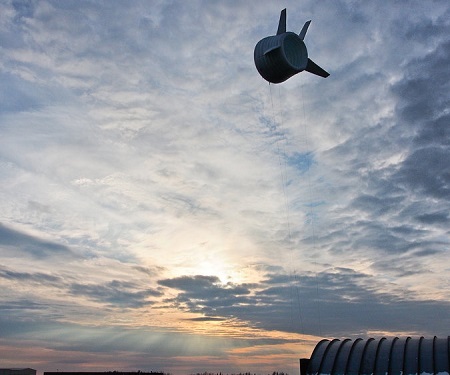 The Altaeros BAT V4, a turbine tethered to land, in a 2013 test at the former Loring Air Force Base in Maine.
Photo: Altaeros Energies

Known as the BAT — or Buoyant Airborne Turbine — the enormous, white helium-filled doughnut surrounding a rotor will float about 1,000 feet in the air and feed enough electricity to power more than a dozen homes through one of the cables tethering it to the ground.

But the skyward expansion has already taken flight throughout the wind industry, transforming parts of the Midwest once shunned into wind powerhouses.

Six years ago there, the wind speeds at 200 feet were not strong enough to make wind development make sense, said Elizabeth Salerno, chief economist and director of industry data and analysis at the American Wind Energy Association, the industry’s main trade group. But as turbine hubs — which sit atop the towers — have risen above 200 feet and included longer blades, that has changed. 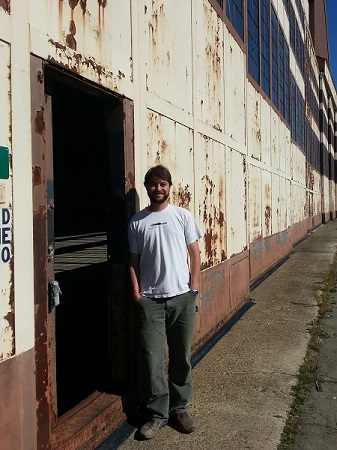 In Michigan, for example, there were no utility-scale wind farms operating in 2008, Ms. Salerno said. Now, there are enough to produce 1,000 megawatts of electricity, which could power hundreds of thousands of homes.

Prices have fallen so low — in some cases to about 4 cents per kilowatt-hour — that utilities have been increasing the amount of wind energy they want to buy through long-term contracts, with regulators saying it is their cheapest option. At the same time, though, the push has spurred some opposition in these new areas from residents who object to the tall, industrial wind turbines.

“It’s not just more wind in the windy places that we already know about,” Ms. Salerno said. “It’s opening up, potentially, regions like the Southeast or others where maybe it’s not quite economic today but it could be in the future. That’s where we’re headed.”

Airborne wind takes that dynamic even further, though for now it can compete only in places where the price of other options, like diesel, is much higher.

Other companies besides Altaeros have tried to develop airborne wind systems.

For example, Makani Power is working on a winged turbine that, according to its website, flies in circles. It was acquired by Google last year, but the technology has yet to be perfected.

In Alaska, though — as in other remote regions, representing a multibillion-dollar market Altaeros hopes to tap — energy costs run so high that even a promising but largely unproven technology is cost-effective, officials say.

“Particularly for Alaska, eliminating the costs that are associated with power installation,” said Alan Baldivieso, program manager for hydrokinetics, geothermal and emerging energy at the Alaska Energy Authority, “makes this type of deployment very attractive.”

The authority awarded Altaeros a $1.3 million grant from its Emerging Energy Technology Fund to support testing the equipment over 18 months with the idea of expanding its use. 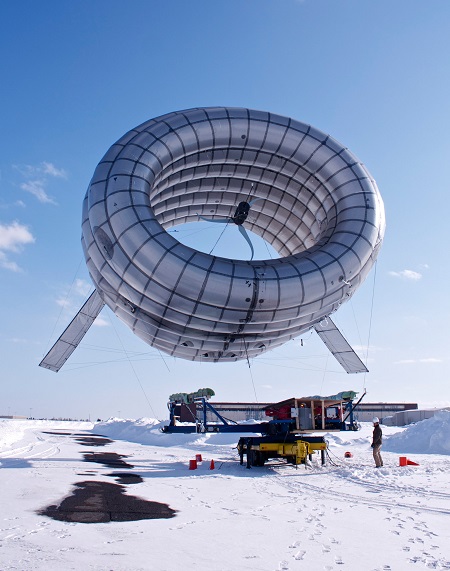 A BAT is launched in 2012. Its developers says it could supply power to a disaster area.
Credit Altaeros Energies

“Our biggest focus is on cost just because it’s so, so expensive in parts of Alaska,” said Sean Skaling, deputy director of alternative energy at the authority. “A nice byproduct is that it’s also typically greener and cleaner if it’s less expensive.”

Ben Glass, chief executive of Altaeros, said he expected the company to be able to offer power at about 18 cents per kilowatt-hour, far too high for most conventional markets but still well below the 35 cents a kilowatt-hour often paid in remote areas of Alaska.

In parts of Alaska, prices can reach about $1 per kilowatt-hour, roughly 10 times the national average. Serving markets like that could help the company establish its business and lower costs to eventually compete for larger-scale projects.

Mr. Glass started the company in 2010 along with Adam Rein (and another partner who has since left) as the two were completing graduate programs at M.I.T., Mr. Glass in aeronautical and astronautical engineering and Mr. Rein in business at the Sloan School of Management. Mr. Glass, whose father had been a pilot in the Israeli Air Force, planned to pursue rocket science but strayed from that career path after an internship at SpaceX, Elon Musk’s rocket company, the summer before his senior year.

“I realized that to be a rocket scientist you kind of had to be a billionaire and have a rocket company or you were just going to be designing some little widget part of the rocket,” he said.

With an interest in clean energy, he turned toward wind and ended up designing an array of turbines for his senior project and putting his engineering skills to use on the airborne machine.

Borrowing from the technology of blimps used to hoist communications, surveillance and weather monitoring equipment high above the earth, the Altaeros system is able to adjust the turbine’s height and alignment in response to changing winds to maximize power production. That allows the machine to produce anywhere from two to three times as much electricity as its conventional tower-mounted counterparts, Mr. Glass said.

The company has raised more than $1 million in the last two years from angel investors and some state governments as well as the federal government, including the Energy and Agriculture departments. The technology could help provide power after natural disasters.

In the long term, executives say they hope to expand into the offshore market, particularly places like the Pacific Coast, where officials recently approved plans to test floating turbine platforms because the waters are too deep to sink conventional foundations and towers into the seabed.

But that is years away. For now, the team is focused on flying as many balloons as it can in areas that lack electricity or are dependent on expensive diesel fuel.

As far-fetched as a field of wind turbines swaying as high as 2,000 feet in the air may seem, the partners say the technology is relatively tried and true. Rather than inventing a whole new approach, said Mr. Rein, a former Bain consultant who dabbled in energy before meeting Mr. Glass through an entrepreneurship class at M.I.T., the partners looked to the most proven, least risky equipment to make a product as quickly and cheaply as possible.

Rather than going for, “a moon shot,” he said, “what we really tried was the safe shot.”

A video introducing the Altaeros: