Posted on February 24, 2014 by LighterThanAirSociety 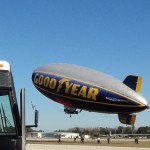 After 14 years of filling the skies, the “Spirit of Goodyear” airship retired after the Daytona 500.  The Goodyear Tire & Rubber Company’s longest continuous operated airship was overhead to provide aerial coverage for its final events this weekend at Daytona International Speedway. 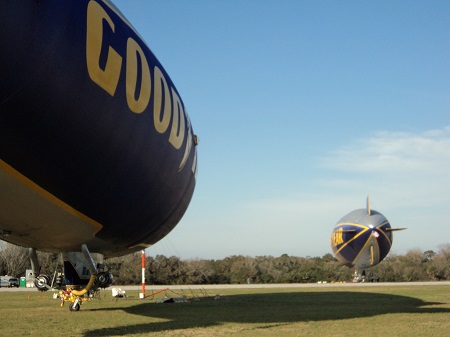 The Spirit of Innovation (L) and the Spirit of Goodyear (R) shortly before taking off to cover the Daytona 500.
Photo: Richard Van Treuren 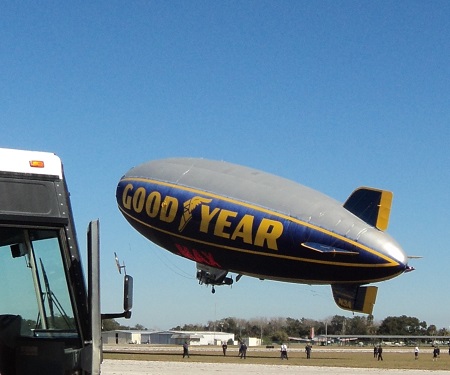 The Spirit of Goodyear departs to fly over the Daytona International Speedway, for its last aerial broadcast.
Photo: Richard Van Treuren

“The ‘Spirit of Goodyear’ has provided captivating aerial coverage of the biggest televised events in its 14-year history including many prominent NASCAR races,” said Paul Fitzhenry, senior vice president, global communications. “Sports fans around the globe have seen the ‘Spirit of Goodyear’s’ aerial coverage and Daytona was an ideal venue to recognize those contributions.”

Since its launch on March 15, 2000, the “Spirit of Goodyear” covered NASCAR races, as well as some of America’s biggest events including the NFL playoffs, MLB All-Star Games, NBA Finals, Preakness, Belmont Stakes, U.S. Opens, and NCAA football games.

As the “Spirit of Goodyear” retires, Goodyear is finalizing construction of an all-new airship at the company’s Wingfoot Lake Hangar in Suffield, Ohio. Training flights on the new state-of-the-art airship are expected to commence in the near future. The new airship will begin a new chapter for Goodyear, which has provided television networks with industry-leading aerial coverage since 1955.

Goodyear began providing tires to NASCAR in 1954 and both companies are celebrating the 60-year relationship this year.