How a Navy Dirigible Became the World’s Deadliest Airship

Posted on October 21, 2017 by LighterThanAirSociety 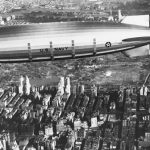 It happened in moments—a gust of whipping wind. Suddenly, the USS Akron, a dirigible performing exercises off the coast of New Jersey, felt more like a flimsy toy than one of the most advanced aircrafts of its age. Then it happened. Buffeted by winds, the airship plummeted toward the Atlantic, disintegrating before the stunned crew could even try to save it. 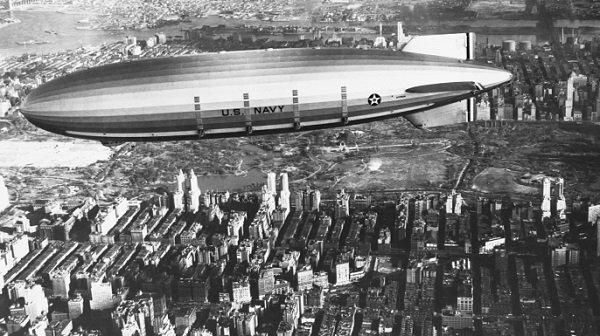 It was the worst airship disaster in history—but in hindsight, officials should have seen it coming. Hailed as “the giant of the skies” when it first launched in 1931, the Akron was so trusted that she was named a commissioned ship for the U.S. Navy. At the time, nobody could have suspected that the Akron’s fate lay at the bottom of the ocean. However, a series of mistakes, accidents and other harbingers pointed to the ship’s doom from the start.

At the time, rigid airships, or dirigibles, were seen as the technology of the future. They were used in World War I for scouting and even bombing attacks, while after the war the U.S. Navy believed it could use the dirigibles as airborne aircraft carriers. 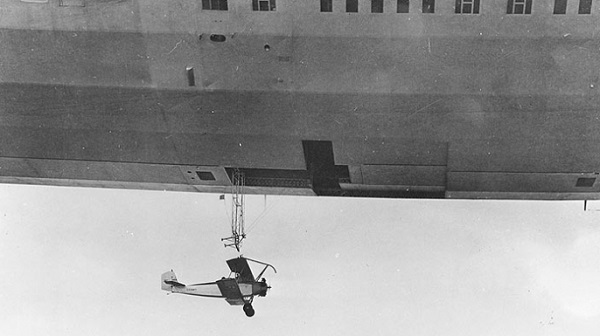 The Akron seemed to make that promise come true. The rigid craft included a huge bag of gas and a large structure beneath where passengers and cargo could ride. Unlike a blimp, its exterior was made of aluminum-treated cotton cloth that stayed the same shape regardless of how much gas was inside. The airship was reminiscent of the Hindenburg, but filled with helium instead of hydrogen gas.

It was gigantic—the largest aircraft in the world at the time—and its alloy skeleton made it strong enough to carry three fighter planes. As the first flying aircraft carrier, the Akron could launch and retrieve F9-C Sparrowhawks, biplanes designed to perform reconnaissance and, conveniently, act as ballast. Once the hydrogen-powered airship was in the air, the Sparrowhawks could take off and help the shift lift even higher.

It all seemed almost too good to be true…and it was. At first, the ship fared well and performed a successful search exercise in the Atlantic Ocean. But in February 1932, the Akron broke loose from the beam holding it to the ground while several politicians and dignitaries were inside. The ship dragged along the ground and sustained severe damage to its lower fin, though everyone on board was uninjured. At the time, the airship was less than six months old. 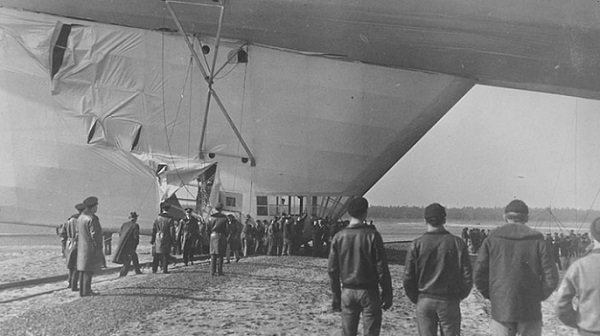 The lower fin of the USS Akron damaged after an incident in February, 1932.
(Credit: U.S. Navy Naval History and Heritage Command)

Rumors began to circulate that the Akron was unsafe to fly. After months of repairs, Rear Admiral William A. Moffett, for whom the Akron was a pet project, appeared before Congress to defend the ship. “To my knowledge,” he said, “it is the best ship that has ever been built.”

But the ship sure didn’t act like it. In May 1932, just a month after Moffett’s confident statement, the ship undertook an ambitious flight from New Jersey to San Diego, where its landing failed spectacularly in front of a gawking crowd. As crews attempted to tether the Akron to the landing dock, it rose unexpectedly. Sailors clung to ropes on the side of the dirigible, then plunged to earth as onlookers gasped. Two men died and another clung to the ship for over an hour before being rescued. And in August 1932, the airship’s tail fin was damaged again in a third accident.

The worst was yet to come. On April 3, 1933, the Akron again took on a group of guests. This time, they were naval officers. The mission was to assist the U.S. Navy in calibrating radio towers. The mission seemed relatively simple, but when the Akron flew into a thunderstorm, it was doomed.

Buffeted by wind, the ship dropped in altitude. Suddenly a gust of wind forced the craft toward the water. Its lower fin tore off and the craft disintegrated. Trapped in the frigid, stormy waters of the Atlantic Ocean, crew members waited for rescue. It was slow to come; rescue ships had a hard time locating the survivors. The men had no life jackets. Slowly, those who did not drown perished from hypothermia. 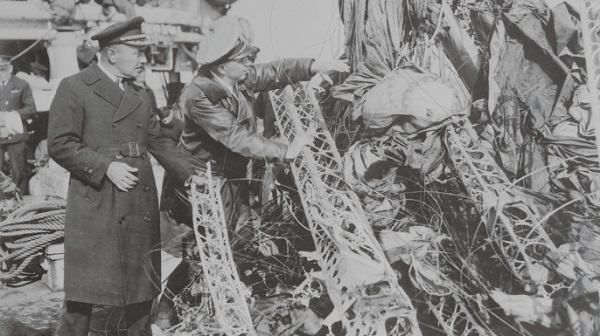 Captain R.A. White, (left) in charge of salvage operations, and Lieut. Commander J.L. Fisher, air expert of Lakehurst, N.J., examine the huge mass of wreckage of the U.S. dirigible Akron, after it had been drawn from the ocean by the U.S.S. Falcon salvage ship.
(Credit: Bettmann/Getty Images)

All in all, 73 men died and only three of the crew survived. Among the casualties was the airship’s staunchest defender, Moffett. Ironically, some of the men who perished that day had survived another airship disaster, the breakup of the airship USS Shenandoah, just a few years earlier.

When naval workers dredged up the remainder of the wreckage later that year, they had no idea that another catastrophic airship crash was not too far in the future. In 1935, the USS Macon, the sister vessel of the Akron, broke up and sank after a storm. This time, those on board had life jackets—the result of a policy change made in response to the Akron crash.

The two disasters, and the dramatic explosion of the German Hindenburg vessel in 1939, marked the end of the airship age. But given the many crashes and challenges the Akron faced during its short life, perhaps the idea of a glorious era of dirigibles was really just an illusion.