Posted on October 28, 2017 by LighterThanAirSociety 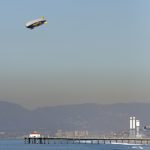 A familiar sight returned to the the skies over Southern California on Thursday as Goodyear’s next-generation blimp – a longer, faster, quieter, easier-to-maneuver craft than the one retired in March – cruised into Long Beach after a 2,600-mile, three-week journey from Ohio.

Wingfoot Two, actually a dirigible rather than a blimp, is here just in the nick of time to resume its trademark photo coverage of major sporting events. Unless the Los Angeles Dodgers are swept by the Houston Astros this weekend, Wingfoot Two may be hovering over Dodger Stadium for Game Six of the World Series on Tuesday. 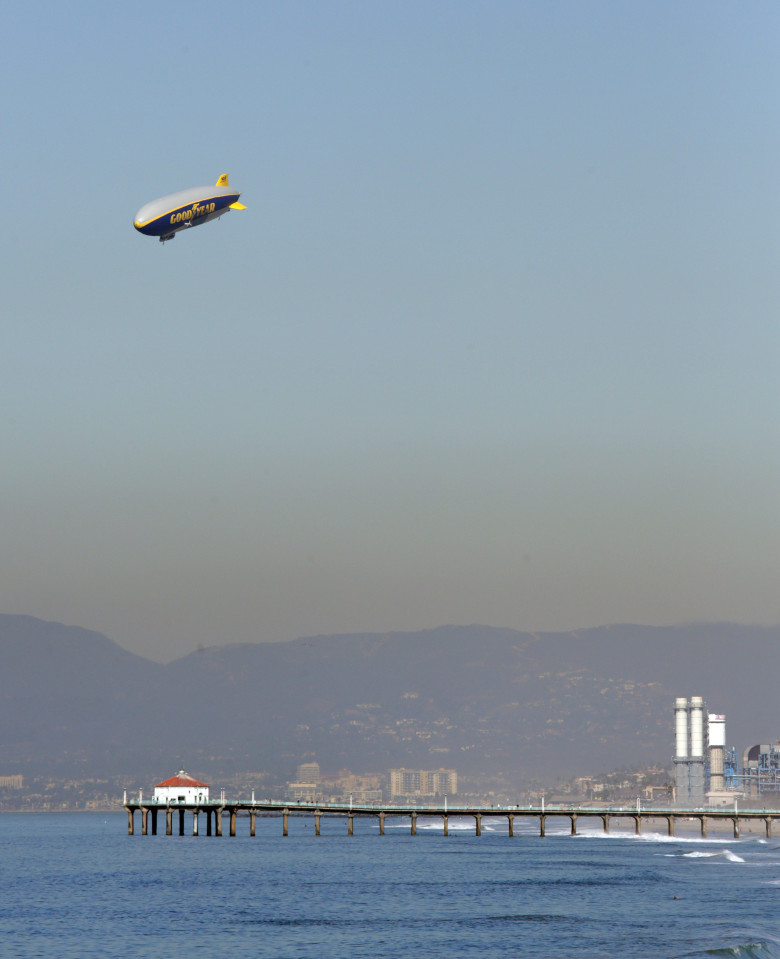 The new Goodyear blimp Wingfoot Two flies over the South Bay Thursday, Oct. 26, 2017, as it makes its way from Akron, Ohio, to Long Beach Airport, where it will temporarily operate as construction upgrades are completed at Goodyear’s airship base in Carson.
Chuck Bennett/Daily Breeze/SCNG

“We’re really excited to be back in SoCal and visible again.” said NT pilot Taylor Deen, one of only two female pilots of lighter-than-air craft in the world.

Pilot-in-charge Matthew St. John said Wingfoot Two enjoyed “a great trip creating new fans across the country. We are honored to carry on our role as an aerial ambassador for Goodyear with this new generation of Goodyear blimp.” 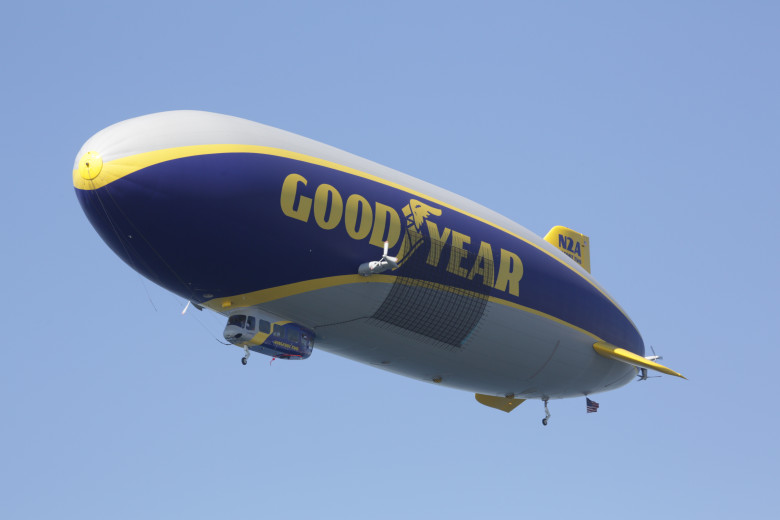 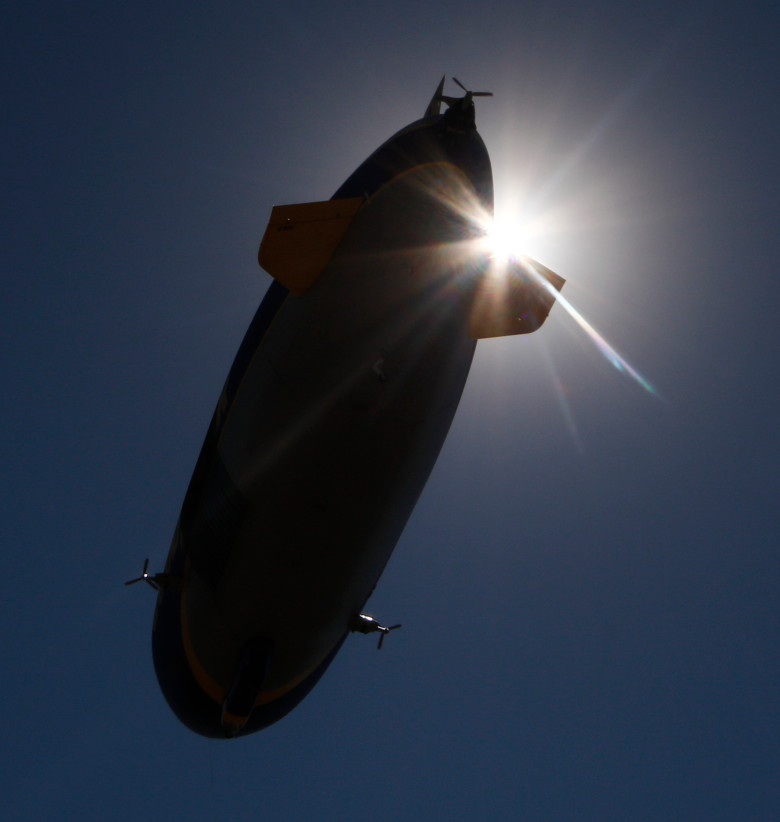 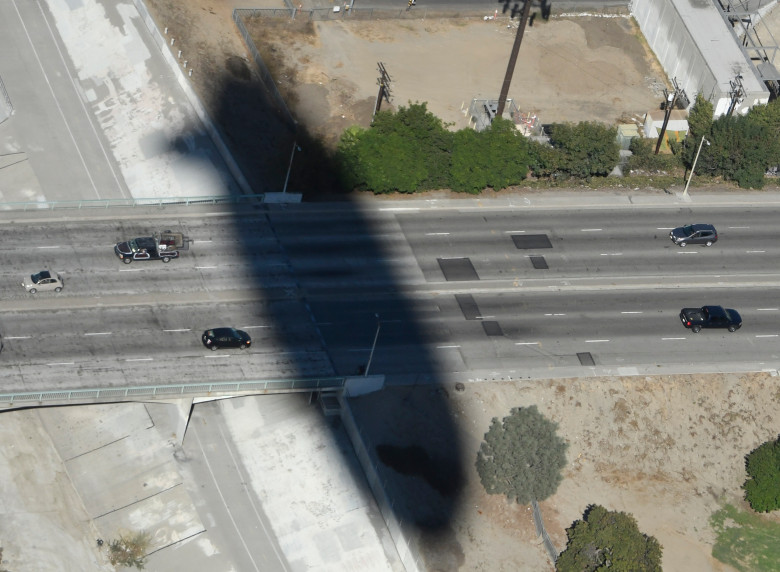 Wingfoot Two plied the skies of Southern California on Thursday, hovering over Griffith Park, the Manhattan Beach Pier, Long Beach and environs, before completing its 10-state journey from Akron, Ohio, to the Long Beach  Airport, where it will temporarily operate until construction upgrades are finished at its permanent home at Goodyear’s airship base in nearby Carson.

Although the new blue-and-yellow, cigar-shaped may look like Goodyear’s previous blimps floating a thousand feet in the air, Goodyear officials say the zeppelin NT is nothing like the previous generation of blimps. The NTs even operate more like a helicopter than a ship-like blimp. 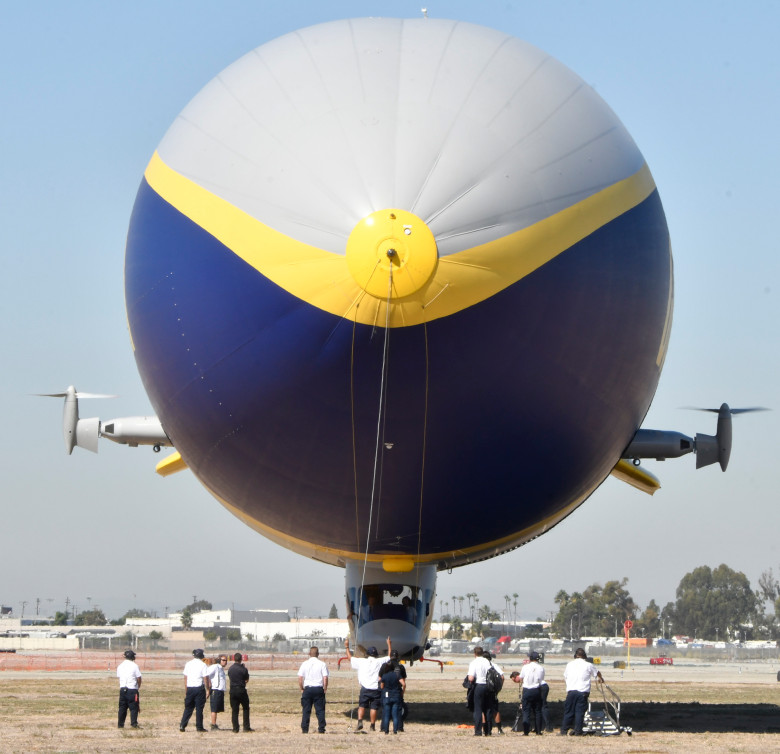 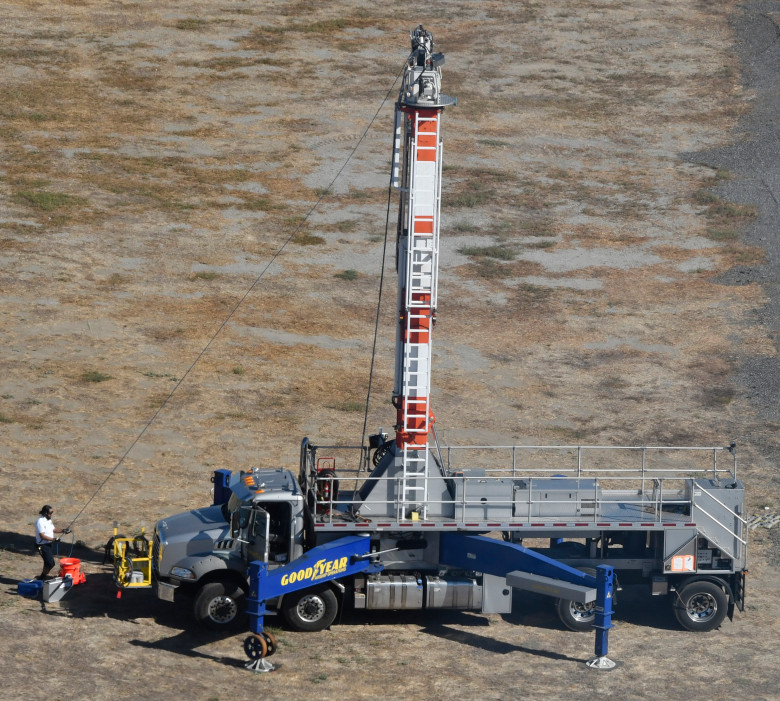 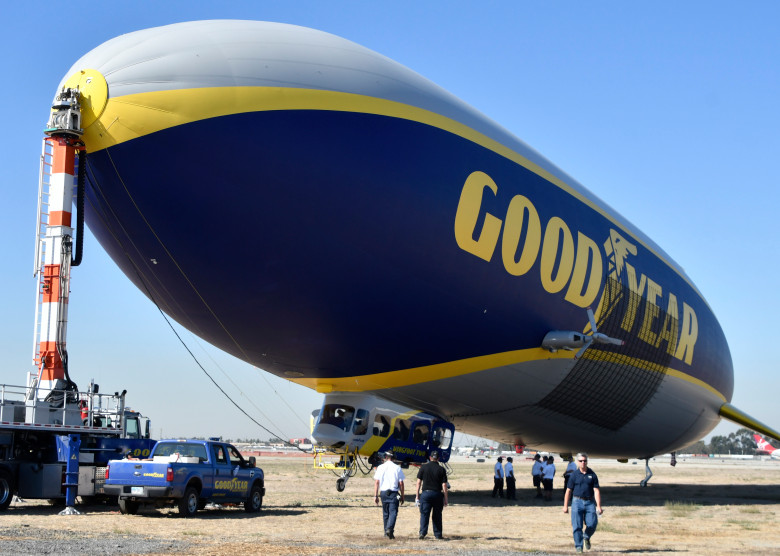 “The only thing that’s the same between the two ships is the helium that’s inside,” public relations specialist Priscilla Tasker said. In March, shortly after decommissioning and dismantling the Spirit of Innovation, Goodyear moved into high gear to update its fleet of three airships – in Florida, Ohio and California.

Nearly stretching the length of a football field at more than 246 feet long, Wingfoot Two is Goodyear’s updated product. Three engines instead of two allow the zeppelin to reach a top speed of 73 mph, though it usually cruises in the air at an easy pace of 35 mph with its 12 passengers, double the capacity of the retired blimps. 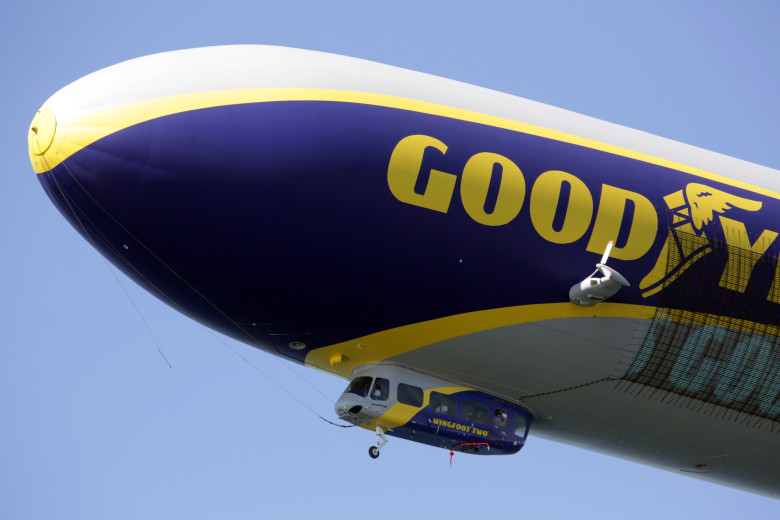 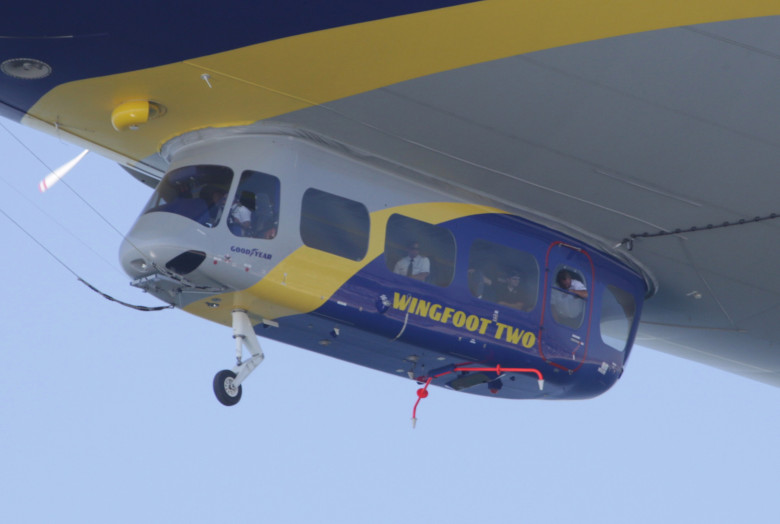 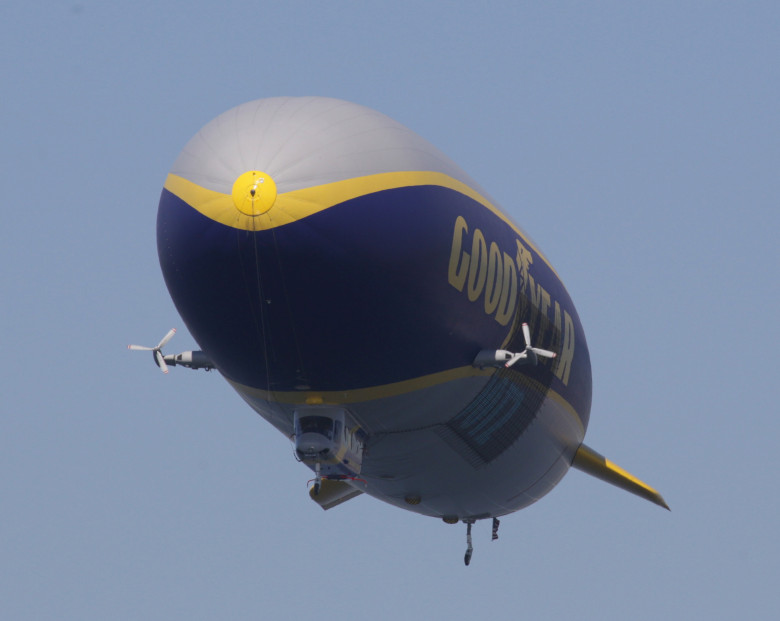 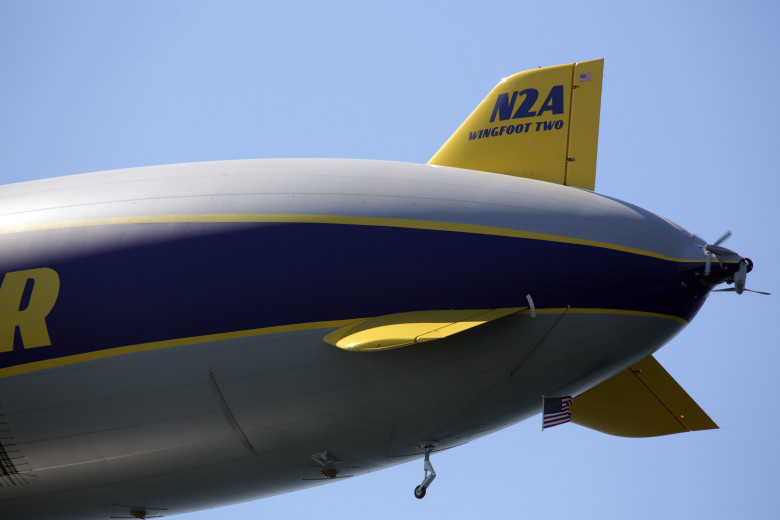 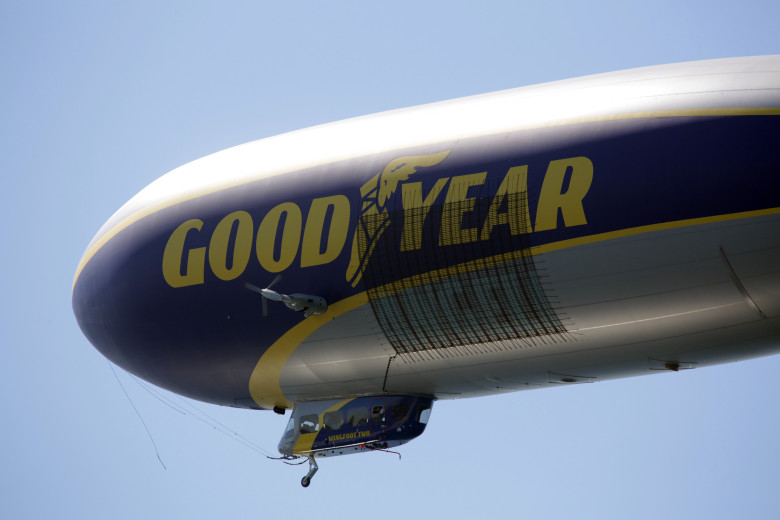 Since 1917, Goodyear has built more than 300 lighter-than-air vehicles for public relations and U.S. military application.

Michael Dougherty, chief pilot of the new zeppelin, said the idea started when Goodyear founder P.W. Litchfield was interested in the idea of an airship serving as a personal air-yacht.

“He saw the grand airships of the 1920s and ’30s and just shrunk it down,” Dougherty said. “Kind of like seeing a cruise ship in the ocean and creating your own personal boat.”

The public has seen Goodyear blimps flying in the California skies for more than 90 years as it’s provided aerial coverage of many of the most-watched sports, entertainment and news events in recent memory. 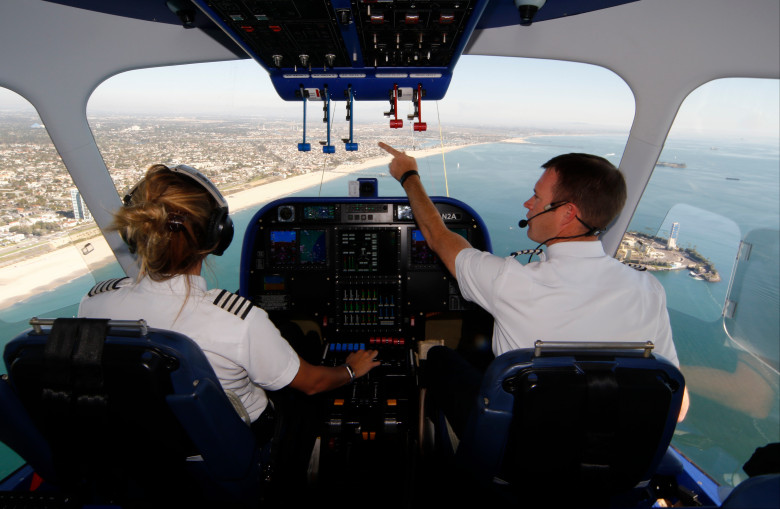 Wingfoot Two will provide aerial coverage for the Clippers game on Nov. 1, BlizzCon on Nov. 3, the Arizona-USC college football game on Nov. 4, and coverage of both the Clippers and Lakers home games on Nov. 5, Goodyear announced.

And, perhaps, the World Series.

“Covering the World Series would be a sweet feeling,” Deen said, but she added that there’s nothing sweeter than the charity rides Goodyear offers. “You always get this real feel-good flight out of it because somebody gets a ride, but there’s also that charity that’s profiting at the same time.”

Dougherty commended Litchfield for his forward thinking in realizing the marketing value of a blimp with a company’s name in lights as it cruises high in the sky for all to see.

“Everybody was so interested in aviation and seeing an airship was just something so exciting, and it remains ’till this day,” Dougherty said. “That’s why the blimp has become not just a national, but an international icon for the company and the United States.”