Goodyear’s newest zeppelin will take to the skies this summer

Posted on March 21, 2018 by LighterThanAirSociety 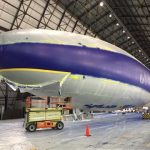 Blimp-enthusiasts might not immediately be able to tell the difference, but the Goodyear Tire & Rubber Co.’s newest airships are not blimps – they’re semi-rigid zeppelins.

And the newest one, an NT Zeppelin, will be flying this summer. It will be added to the existing fleet of NTs – Wingfoot One and Wingfoot Two – in operation in Pompano Beach, Florida and Carson, California.

The new zeppelin – not yet named – is now being painted inside Goodyear’s 101 year-old hangar at Wingfoot Lake in Suffield. 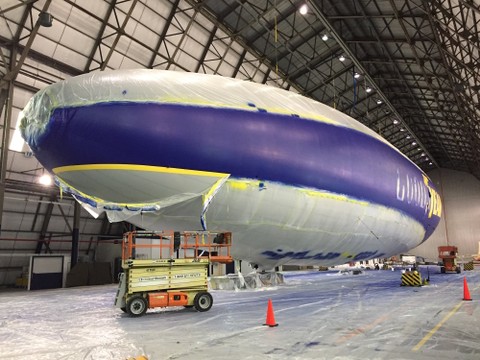 Goodyear’s newest airship, a semi-rigid NT Zeppelin, will fly this summer to join the existing fleet of NTs — Wingfoot One and Wingfoot Two. The new zeppelin – not yet named – is being painted inside Goodyear’s 101 year-old hangar at Wingfoot Lake in Suffield.
Source: The Goodyear Tire & Rubber Company

The painting process, performed by Thomarios based in Copley, is rigorous, as the paint must dry between coats, said Eddie Ogden, a Goodyear spokesman and historian, in an email.

Upon completion, about 112 gallons of paint, provided by Akron Paint and Varnish of Akron, will have been applied to the airship’s polyester fabric.

Goodyear’s newest airships are also longer and leaner than the retired GZ20 blimps, which Akronites have enjoyed watching fly the skies since 1969. Earlier model blimps date back to 1919. All Goodyear’s older blimps are now retired.

The new airships are also much faster, clocking up to 73 mph, while the older blimps maxed out at 50 mph.

The new zeppelins have seating capacity for up to 12, with a two-person crew, while GZ20 blimps accommodated 7 people. GZ20s were lighter weighing in at 12,840 lbs., compared to the zeppelins, which weigh 19,780 lbs. without helium.

The main difference is the internal framework – NT zeppelins have aluminum and carbon fiber trusses while the GZ20s had no framework.