Forecasters Identify Market for over 600 Hybrid Air Vehicles Worldwide in 20 years: HAV

Posted on September 2, 2014 by LighterThanAirSociety

In an interview with Defenseworld.net, Tom Grundy, Defense Business Development Lead for Hybrid Air Vehicles (HAV) talks about market forecasts for HAVs, its capabilities, various applications and how the company plans to tackle technical failure and budget issues.

Q: Can you give us an overview of Hybrid Air Vehicles and the kind of technology you develop?

Hybrid Air Vehicles is the world’s leading developer of the next generation of lighter-than-air craft. Based in the UK, it can draw on 30 years of modern airship development. HAV is currently developing 2 hybrid air vehicles:

·         Airlander 10 –  A long-endurance aircraft that can stay airborne for 5 days at a time and provide a stable, multi-mission platform for persistent wide area surveillance, communications relay, border patrol, maritime surveillance and other related missions. It also has civilian applications such as geological survey, academic research, surveillance or filming.

·         Airlander 50 – A heavy lift aircraft capable of transporting over 50 tons of equipment to any area in the world. The Airlander 50 can land on any flat surface such as water, ice and desert as well as more traditional surfaces. It is suitable for defense logistics, including carriage of outsize and heavy loads to unprepared locations. It also has civilian applications in mining, oil & gas and delivery of aid or disaster relief. The Airlander 50 can also be fitted with an Intelligence, Surveillance and Reconnaissance module, enabling multi-day ISR operations with a command and control, sensor exploitation and dissemination capability on board.

Hybrid Air Vehicles provide a sustainable, viable and cost-effective aerospace platform for a number of applications. The Hybrid nature of HAV’s aircraft means they benefit from the efficiencies of being both lighter-than-air and having lift generated from their aerodynamic shape. This allows for ultra-long endurance flying, heavy lifting capability and very low cost of operations. 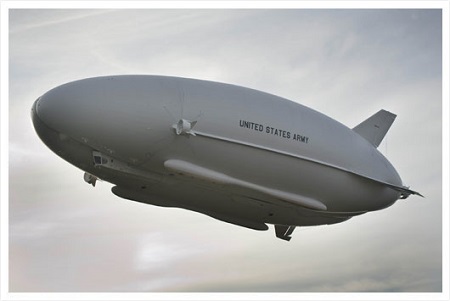 Q: How is the Airlander 50 different from other surveillance aircraft?

The Airlander has significantly enhanced payload, endurance and operating costs compared to other surveillance aircraft. There is a great deal of space, weight and power (SWAP) available for the mission system in an Airlander aircraft, allowing multi-mission capability and role changes to be effected quickly and easily compared to other aircraft.

The Airlander 10 was designed to fly in an unmanned configuration for up to 21 days, with 1000kg mission system. In its current manned configuration it will carry pilots, a small crew and up to 3 tons of payload for up to 5 days. This allows persistent surveillance of areas over much longer periods than is currently possible, with fewer assets and at much lower cost. The larger Airlander 50 will carry more payload, more crew (allowing sensor operators, mission commanders and/or response teams to be on board) for up to 5 day missions.

Q: Development of the Airlander began as a US Army project with either a surveillance option or civilian heavy lift version. Can you tell us more about its capabilities?

Airlander 10 was originally developed for the US Army’s Long Endurance Multi-Intelligence Vehicle (LEMV) program. Airlander 50 is designed as a Civil/Military heavy lift asset capable of carrying over 50 tons of cargo to remote and austere locations. Airlander 50 also has an ISR variant.

Q: The aircraft’s remotely piloted capabilities also make it the largest unmanned aerial vehicle. Can you elaborate on this?

The Airlander 10 was designed as an optionally manned aircraft and is currently in a manned configuration. At over 300ft long, with over a million cubic feet of internal volume it is the largest aircraft in the world today.

Q: What are its take-off and landing capabilities?

Takeoff and landing characteristics vary with platform type, load and helium fill. However, Airlander variants have VTOL and STOL take-off and landing capabilities from any area that is more-or-less flat, whether water, sand, grass, concrete or ice. 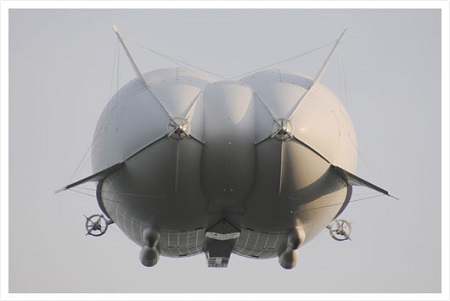 Q: Your partnership with Northrop Grumman on the Long Endurance Multi-Intelligence Vehicle (LEMV) for the US Army was discontinued due to technical failure and budget issues. Going forward how do you plan to tackle these issues? Tom Grundy:

The Airlander 10 flew only 26 months after contract award after which the official US Government report on first flight stated:  “All objectives were met during first flight”. The US Department of Defense discontinued the program in the context of the 2013 sequestration program leading to budget cuts across multiple military programs. HAV is now working to bring the Airlander 10 back into flight in the UK for demonstration to multiple potential customers worldwide, completing a development cycle that has spanned 10 years.

Q: Who could be the primary customers for the aircraft? Do you plan to market this internationally?

HAV and independent market forecasters have identified a market for over 600 Hybrid Air Vehicles worldwide over 20 years. HAV is working to bring the aircraft to international civilian and defense markets, including ISR, military logistics, border surveillance, serving the oil and gas industry and delivering freight and raw materials to remote locations with low environmental impact – e.g. for the mining industry.

Q: The blimp has drawn comparisons to ill-fated airship R101 from the 1920s. What are your thoughts on that?

We don’t draw any comparisons to airships of old.  We are not an airship, but an entirely new class of aircraft called a hybrid air vehicle. We use modern technology, and inert helium as our lifting gas. We design and certify our aircraft to standards every bit as stringent as those for fixed wing aircraft or helicopters. The avionic systems, CAD-designs, materials, engineering innovations and ground support systems did not exist even as recently as 20 years ago.  This is a very modern aircraft designed for the 21st Century and is very much part of the planet’s future, not its past.