Posted on November 8, 2013 by LighterThanAirSociety 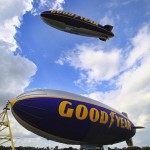 For the first time ever, two Goodyear blimps will simultaneously provide live aerial television coverage of a sporting event as they circle overhead Miami’s SunLife stadium for ESPN’s coverage, beginning at 7 p.m. ET, of the November 9 NCAA football matchup between Virginia Tech and Miami. 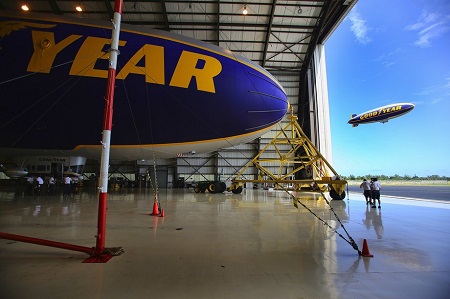 The Spirit of Innovation is on the ground still in the hangar as The Spirit of Goodyear flies overhead.
Photo: Mike Stocker / Sun Sentinel

The “Spirit of Goodyear” and the “Spirit of Innovation,” weather permitting, will each provide a unique feed to ESPN allowing the broadcaster to select the best angle of the coveted aerial shot viewers are so accustomed to enjoying. Though Goodyear blimps have provided TV networks with live aerial views since 1955, never have two provided coverage of the same event at the same time.

The Goodyear Tire & Rubber Company owns and operates three airships in the United States but it is a rare sight to see two flying together, according to Nancy Ray, Goodyear’s director of Global Airship Operations. 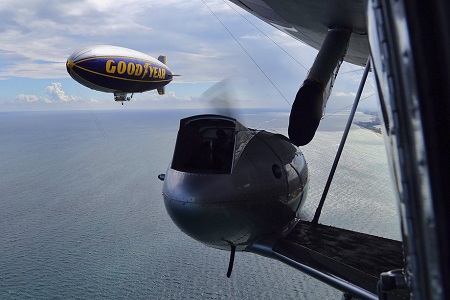 Looking out the windows of The Spirit of Innovation, The Spirit of Goodyear flies over Pompano Beach.
Photo: Mike Stocker / Sun Sentinel

The two blimps are currently housed in the company’s Pompano Beach, Fla., hangar making the event coverage possible. The previously Ohio-based “Spirit of Goodyear” recently relocated to the Sunshine State, joining its sister ship “Spirit of Innovation” in preparation for its retirement in early 2014.

The company is on schedule with its replacement as construction of the new Goodyear NT airship continues inside the company’s Wingfoot Lake hangar in Suffield, Ohio. Test flights on the new airship are expected to commence in early 2014.

Goodyear has built and operated more than 300 lighter-than-air vehicles since 1917, including two large rigid airships – the U.S.S. Macon and U.S.S. Akron. The Goodyear NT is the first semi-rigid airship to be built in the 95-year history of the Wingfoot Lake Hangar.

Goodyear’s entry into aerial coverage occurred in 1955 at the Rose Bowl parade and game in Pasadena, Calif. Since then, the blimps have covered hundreds of college football matchups. So far in 2013, the three U.S.-based blimps have covered 12 matchups for ESPN/ABC. The California-based “Spirit of America,” is set to cover the November 7 ESPN matchup of Oregon at Stanford.