Posted on September 21, 2013 by LighterThanAirSociety 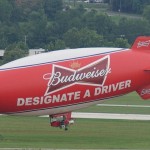 Anheuser-Busch’s ‘Designate a Driver’ Budweiser blimp is capping off a 17-week tour with a visit to St. Louis.

The red and white blimp, which has the message ‘Designate a Driver’ visible to those on the ground, is scheduled to soar above the St. Louis skyline this weekend, weather permitting.

The blimp traveled to more than 20 cities across the country this summer, flying over music festivals and other big events. This year’s tour marked the first time in more than a decade a Bud blimp took to the skies.

“We are constantly looking for ways to repackage the designate a driver message, and to repeat the same message can be challenging for it to be effective,” said Bill Bradley, A-B’s senior director of corporate social responsibility, advertising and outreach. “The Budweiser blimp is a larger than life way to promote the message.”

A-B rents the blimp, which can hold a pilot and three passengers, from New York-based Van Wagner Communications. This year, A-B took the blimp to New York for the Major League All-Star Game festivities, the Ohio State Fair and Budweiser’s Made in America Music Festival in Philadelphia. “We have reached more than 10 million people from just the visibility of the blimp itself,” Bradley said, “and that doesn’t include Facebook, Twitter or media coverage.”

The blimp tour had been scheduled to kick off in St. Louis in May, but it was rerouted to Memphis when weather conditions here didn’t cooperate. 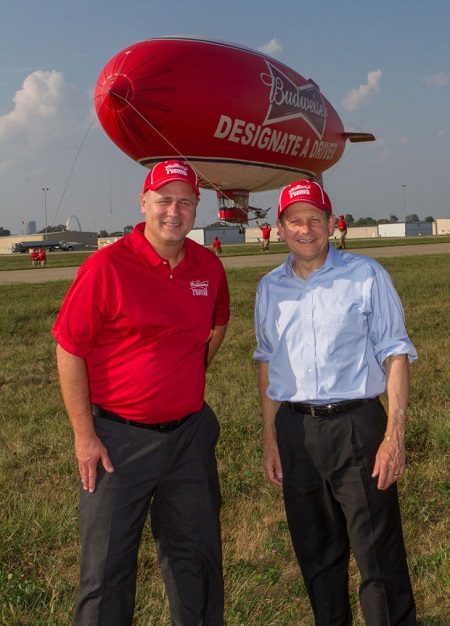 St. Louis is the North American headquarters for A-B InBev. The end of the tour in St. Louis coincides with A-B InBev’s ‘Global Be(er) Responsible Day’ on Friday, which is designed to promote responsible drinking.

“Global Be(er) Responsible Day is a special day for all of us, but designating a driver isn’t just a good idea for special occasions,” Kathy Casso, A-B’s vice president of Corporate Social Responsibility, said in a statement. “Drinking responsibly and making plans to get home safely matter every day of the year.”

A-B employees and wholesalers planned to visit St. Louis area bars and restaurants Friday to ask people 21 and older to sign a pledge to drink responsibly at NationofResponsibleDrinkers.com, which launched in June 2012. During the blimp tour this summer, the website nearly doubled the number of pledges to 45,000 pledges.

This entry was posted in Blimps and tagged Budweiser Blimp, Designate a Driver. Bookmark the permalink.