Posted on October 23, 2013 by LighterThanAirSociety 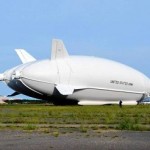 After spending $297 million to develop a craft that could hover over an area as long as three weeks, the Pentagon quietly sold it for $301,000 to its maker.

Near the height of the Afghanistan war, the Pentagon spent $297 million on a seven-story blimp-like aircraft — as long as a football field — that would hover over the war zone for weeks at a time, beaming back crucial intelligence.

But as the military wound down its presence in the Middle East, plans for the unmanned floating spy center deflated. The aircraft fell behind schedule, became 12,000 pounds overweight and was ultimately canceled after just one test flight.

Last month, the Pentagon quietly decided to sell back the sophisticated spyship to the British company that built it for $301,000 — a fraction of its investment. 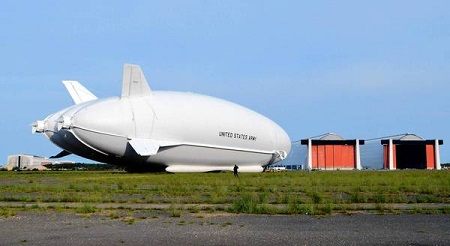 The Army’s Long Endurance Multi-Intelligence Vehicle before its only test flight at Lakehurst Naval Air Station in New Jersey. It was subsequently deflated, rolled up and sold to its maker.
Photo: Northop Grumman

The U.S. Army’s Long Endurance Multi-Intelligence Vehicle was initially touted as a revolutionary aviation concept that would give troops on the ground an uninterrupted view of the war zone.

Now, in the current federal budget environment, the program stands as an example of military waste.

Sen. John McCain (R-Ariz.) asked why it took so long for the program to be killed.

“Maybe those decisions could have been made earlier — at a point when less taxpayer funding had been wasted?” he said this year in a speech to the defense industry. “Critically, why were these programs allowed to continue beyond the point when senior acquisition management and their industry partners knew, or should have known, that their original cost, schedule and performance assumptions were no longer valid?”

The Army maintains that technical data and computer software for its airship program will be useful for future projects. They say selling the aircraft will save them money in the long run.

“We learned quite a bit from the technology,” said John Cummings, an Army spokesman. “In the end, it was determined not to pursue it.”

The airship was an ambitious program from the start. It was supposed to fly for as long as three weeks at a time, collecting heaps of intelligence from 2,500 pounds worth of the most advanced cameras, sensors and spy technology.

Soaring above the war zone at 20,000 feet, the airship was designed to withstand enemy fire because of its blend of unique fabrics, including Kevlar, which is used for body armor.

The Pentagon got the idea because of the increased use of spy drones to keep an eye over the battlefield. The unmanned technology’s relative success on watching targets for long periods of time highlighted the need for stationary aircraft that could provide constant surveillance — not just flyovers for a few hours, but for days or weeks.

That gave rise to the idea for an unmanned airship, with its ability to linger over an area for a long time.

In June 2010, the Army signed a contract with the British firm Hybrid Air Vehicles Ltd. and Falls Church, Va., military giant Northrop Grumman Corp. to develop as many as three aircraft. If the Army went through with this plan, costs would have climbed to $517 million.

The Army also wanted quick results. The goal was to develop and test the aircraft within 18 months — an extraordinarily ambitious time frame in today’s defense industry — and then transport it to the Middle East for military assessment.

Military officials thought the plan was feasible because Hybrid Air Vehicles already had been building the airship, which uses a mix of aerodynamic lift and helium buoyancy to fly. The airship’s hull resembles two balloons merged together — like Siamese twins.

Northrop, being a leader in drone and sensor technology, was to provide its expertise in systems integration and flight and ground control operations. About 40 of the company’s engineers in El Segundo and Rancho Bernardo worked on computer programs to reconfigure the lumbering piloted ship into a drone.

The airship involved subcontractors from more than 18 states and at least three countries. It was designed, built and flown in 26 months from the contract award.

Aside from falling eight months behind its initial schedule, the airship had other problems, according to a report by the Government Accountability Office. Last year, the GAO said it was “about 12,000 pounds overweight because components, such as tail fins, exceed weight thresholds.”

The GAO said the increased weight reduced the airship’s estimated endurance “at an altitude of 20,000 feet from the required 21 days, to 4 to 5 days.”

In its first and only flight, the airship flew for more than 90 minutes above Lakehurst Naval Air Station in New Jersey in August 2012. The airship had a pilot onboard.

“We feel that getting a hybrid airship to first flight in such a tight timeline was an accomplishment unto itself,” said Timothy Paynter, a Northrop spokesman.

Hybrid Air Vehicles declined to comment for this story.

It was supposed to head to Afghanistan shortly after the test flight, but that never happened. By February, the project was canceled along with many other military programs, including a $211-million airship built for the Air Force.

Once a decision was made to cancel the Army’s program, the airship’s high-definition cameras, high-powered sensors, and communication equipment were stripped off. The helium was drained for resale.

On Monday, Army Secretary John M. McHugh told reporters in Washington that budget cuts and sequestration have come at “great cost.” He said he expects even more cuts.

To the frustration of Pentagon critics, the Army said the airship’s sale is expected to be completed by the end of October.

“We don’t expect every military acquisition to work perfectly,” said Steve Ellis of the watchdog group Taxpayers for Common Sense. “But this sale is adding insult to fiscal injury. The contractors are happy. They were paid millions of dollars. Now they have their aircraft back too.” 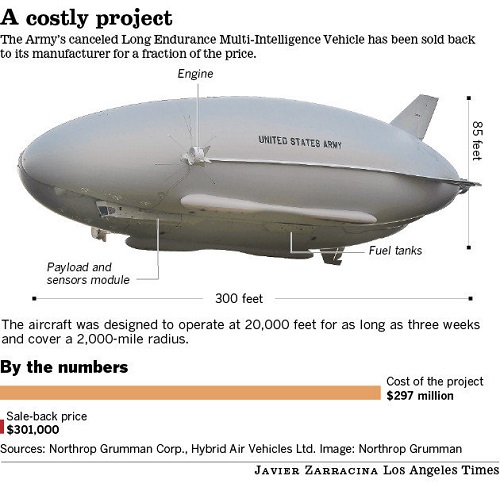