Posted on May 6, 2018 by LighterThanAirSociety 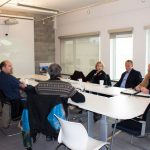 Industry leaders and influential community members met with the projects architects in Winnipeg’s Exchange District on April 27. They met to discuss building what could be Canada’s largest tourist attraction, an airship hangar, complete with airships, in St. Laurent.

The meeting was organized by an economic development promoter and community volunteer from St. Laurent, Luc Paul Fontaine. He invited some contacts in the industry to attend the planning and brainstorming session at ft3’s head office, the architecture firm that will be undertaking the airship project alongside GPP Architecture. 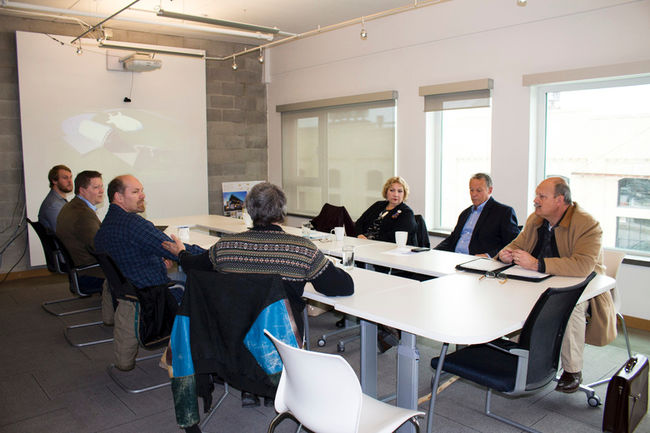 Industry professionals met to discuss Manitoba’s airship project at ft3 in Winnipeg April 27. The hangar and ships will be built in St. Laurent, as well as a hydrogen plant.
Source: The Interlake Spectator

Those in attendance were riveted as they reviewed the plans that Fontaine has been dreaming of for approximately 20 years and the IsoPolar Airship Association member just may to see shovels in the ground this year.

“You know, (St. Laurent) was always the place,” Fontaine told The Interlake Spectator. “With global warming – the crisis up north with transport and the insane costs for goods and services – why now? It had to happen. It took Professor Prentice (and) our team 20 years. (Now) the time has come.”

“It’s just such a great thing. It will have a very huge (and) positive impact on the community (of St. Laurent),” Duguay explained. “(And) it’s coming from the Metis community – I am very, very proud of them.”

BNS Environmental Logistics president Blair Sherwood, who was not able to attend, but whose powerpoint presentation they highlighted, has been making advances towards building a hydrogen plant in St. Laurent, which is the first step in the process of creating this new industry for Manitoba. Hydrogen, being a green renewable, is made from water and his company is hoping to build a plant in St. Laurent.

Bio-Filtration consultant and President of Panglobal Distribution Ltd. Capt. John Tabbernor, who specializes in water treatment, was able to attend along with the President of Canadian Solar, David Therrien.

Therrien said that he has known Luc “forever” from the renewable energy world and that he is happy to see this project moving forward for the green energy world.

Both got involved with the airship hangar project through Fontaine, as well.

“I have been an architect since 2000. I have worked in California and I am in Manitoba now. I have always been involved with building for sustainability and it’s really one of the things that, throughout my career has been a big influence,” Duhoux said.

“I’m quite excited to see this group of people get together and strategize about what the next steps are. It’s such a unique project.”

GPP’s Prefontaine said the airship project fits very well with the psychology of his firm as well, during the strategy session. The two firms plan to work together, in tandem, with no master architect on their throne.

“We really support this project. It had the right people, it’s the right time and the right location,” Prefontaine said. “We pick our clients based upon what they’re doing and where they’re headed, and so the project in St. Laurent that we saw made logical sense, intuitively and from a business place, and for the location. So all of those made a great deal of sense to us and that’s what made us (want to) get involved.”

ft3 is an architectural company for the Canadian prairies. They are recognized for holding Certificates of Practice in Manitoba, Alberta, Saskatchewan and Ontario, with an office in Winnipeg.  Known in Winnipeg for their work at the Rapid Transit Osborne Station and   Thermëa by Nordik Spa-Nature in 2014, just to name a few, they work in tandem with GPP Architecture, a client-centric firm of architects, designers, planners, visionaries and thinkers. They derive their energy and passion from their clients and return it to them in the form of truly great and inspired projects.

“I’d like to say it’s futuristic, but it’s really not. It’s a typology that has come back around full circle and it really just makes logical sense,” Prefontaine said of the airship project.

The infrastructure required would be maintenance hangars and cargo landing platforms – the BASI airship is based on the successful designs of the 1930s, but made with modern engineering, certified aviation components and hydrogen-fuel cell propulsion.

It was noted during the presentation how the airships could serve the 70% of Canada’s land mass that has no roads, operate year-round, carry large bulky loads and cut the current costs of resupply by 50%. Hydrogen-fuel-cell powered airships can operate with zero carbon emissions.

“We believe we should produce air craft that don’t produce green house emissions and with an airship, we can do that,” Dr. Barry Prentice, a Professor of Supply Chain Management at the I.H. Asper School of Business, University of Manitoba and the former Director (1996-2005) of the Transport Institute and the president of Buoyant Aircraft Systems International told the Interlake Spectator April 2.

Prentice has been presenting this concept to industry leaders for many years, outlining how scaling a cargo airship transport system for the Canadian North would reduce travel costs by 50%.

“The time – the permits, the license, the regulations, the criteria (all) seemed like a pipe dream, but now it’s time,” Fontaine said.

The airship hanger is planned to be so large, you can see it from space, the presentation explained.

Both architecture firms agree that it will even have its own eco-system as its height will challenge that of the pyramid of Giza and the Richardson Building.