Posted on November 14, 2014 by LighterThanAirSociety 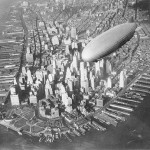 Flying aircraft carriers are a great idea on paper – especially when they’re commanded by the likes of Nick Fury – but in reality, they’re more death trap than sky island. Or, at least, the short-lived USS Akron was. When it crashed off the New Jersey coast in 1933, it took nearly everybody on board with it. 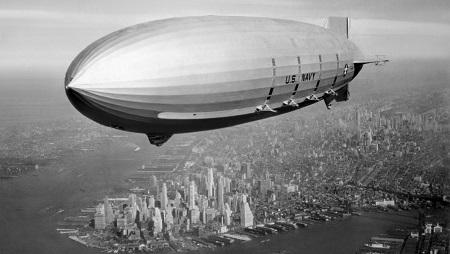 Image Courtesy of US Navy

The Akron and her sister ship, the USS Macon, were helium-filled dirigibles developed by the US Navy beginning in 1929 at the newly-completed Goodyear-Zeppelin Airdock in Akron, Ohio. Construction was overseen by Karl Arnstein, one of the leading airship designers of the day, and his 12 hand-picked engineers. 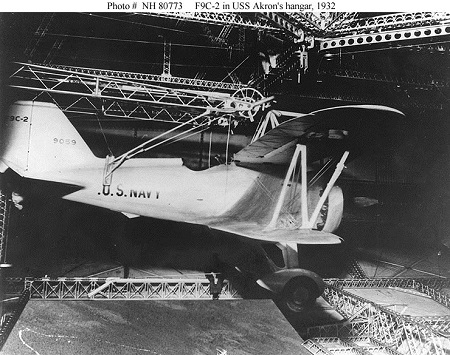 An F9C Sparrowhawk affixed to its trapeze hanger.
Image: US Navy

Arnstein’s design for the 785-foot Akron was nothing short of revolutionary. The airframe was built from duralumin alloy and could fly 10,500 miles on its 20,000 gallon supply of gasoline. Rather than having a single keel running the length of the vessel along the bottom, he employed three separate keels set at 45 degrees (positioned at 12, 4, and 8 o’clock) to better support the airship’s envelope. The tri-keel design also eliminated the need for multiple cross-shaped supports that dominated the interior of the Hindenburg, allowing the Akron to transport other vehicles within its envelope. Eight 560 hp Maybach VL-2 engines ran along the length of the lower keels to provide thrust for the external propellers.

The Akron also employed a unique spy basket device—part radio transmitter, part inverted periscope—that allowed the dirigible to remain hidden within a cloud but still peek out and scout for enemy ships and aircraft. Both the Akron and the Macon were initially constructed as long range reconnaissance platforms though Navy brass did also consider them for use as flying aircraft carriers replete with a contingent of prototype F9C Sparrowhawks stored in the underside of the vessel. The Akron could load up to five Sparrowhawks in its 75- x 60- x 16-foot hangar, then both launch and land them using a unique overhead “trapeze” arresting system that let the F9Cs be employed either for forward reconnaissance or defense of the mother ship.

Unfortunately, neither airship got the chance to see combat. Since the Navy was just beginning to consider the potential uses for dirigibles, the Akron spent most of its time as a development platform. It made its maiden voyage in 1931 and was almost immediately beset by accident. The Akron’s tail section was badly damaged in February 1932 when the dirigible broke free of its moorings and was smashed about in high winds. 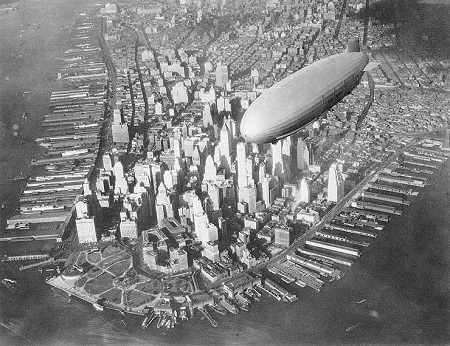 The USS Akron over Manhattan.
Image: US Navy

It broke free once again in May of that year while at the Naval Training Station in San Diego – this time carrying four seamen from the mooring crew (the dudes that held the airship’s mooring lines as they were being staked down) high into the air. One sailor let go at a height of 15 feet, two more fell from much higher and died. Only the fourth man, Apprentice Seaman, C. M. “Bud” Cowart managed to secure himself to his line and was rescued an hour later when the dirigible was brought back under control.

A third accident in August of 1932 saw more damage to the tail section, though it was quickly repaired. The Akron’s fourth accident, however, was its worst. The airship became caught in severe weather off the coast of New Jersey and was smashed against the water by massive gusts of wind where it broke up and sank, killing 73 of the 76 airmen on board. As a result, the Macon was outfitted with life preservers which came in handy when it too crashed into the ocean in 1935. That time, however, 70 of the 72 crewmen survived.

The loss of both airships spelled the end for America’s military love affair with dirigibles. And while civilian-use of these vessels has slowly gained traction over the last 70 years or so, the US military has only begun reconsidering the technology now that autonomous air systems have matured