Posted on April 13, 2015 by LighterThanAirSociety 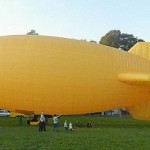 Look, up in the sky: It’s a new thermal airship.

That’s what David Wakefield calls his blimp that will be emblazoned with advertising and flown all over the Sacramento region. This week, the blimp is being flight tested from its mooring near Mather Airport.

Wakefield, president and chief pilot of Cheers Aerial Media, said there are only 6 of the Gefa Flug thermal airships from Aachen, Germany, operating in the United States.

The airship is 135 feet long and more than 50 feet tall. Unlike most blimps, the Cheers Aerial Media airship uses hot air instead of helium, according to a company press release.

The inflated portion of the blimp has a volume of 105,000 cubic feet and can carry two specially fitted banners, which make up a combined advertising space of 4,000 square feet. 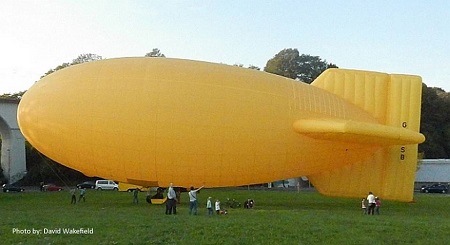 The gondola for the aircraft is made of stainless steel tubing with aluminum panels. The standard model seats four people.

Heat is provided by dual burners and a small fan beneath the burners helps keep the inflated portion of the blimp at full pressure. Propulsion is provided by a 65-horsepower aircraft engine with a four-blade propeller.