The Next Big Thing for Exploring the Distant Universe: Balloons

Posted on July 11, 2013 by LighterThanAirSociety 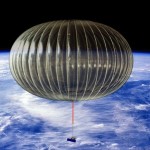 The history of space exploration is in many ways a history of lenses. From Galileo’s Starry Messenger to the powerful telescope arrays we have today, it has been two basic facts — the curve of a glass, the sheen of a mirror — that have largely been responsible for expanding human vision beyond Earth. And one of the best ways we have imagined to explore the worlds beyond our own is to put human-honed glass into space itself. Space telescopes can capture images that are unblurred by Earth’s atmosphere.

But while the Hubbles and the Chandras of the world are amazing sources of scientific data about the distant universe, they are also amazingly expensive sources of those data. Hubble, launched into orbit in 1990, cost around $2.5 billion; Chandra, prior to its 1999 launch, was scaled down in its capabilities — with a reduction of the number of mirrors it contained from 12 to eight and a reduction in scientific instruments from six to four — in order to minimize its costs.

So while our appetites for exploration are large, our resources are (relatively) small. Especially now, during this time of austerity here on Earth, it’s salad days when it comes to our scanning of the universe. Which means that scientists need to devise ways not just to process the new knowledge we gather, but also to gather that knowledge as efficiently — read: as cheaply — as possible.

A team of researchers in the U.S. and Europe think they’ve done just that. The group has devised a system for exploring the universe through a telescope that will hover over 99 percent of the Earth’s atmosphere.

And that telescope will be hanging from a balloon. 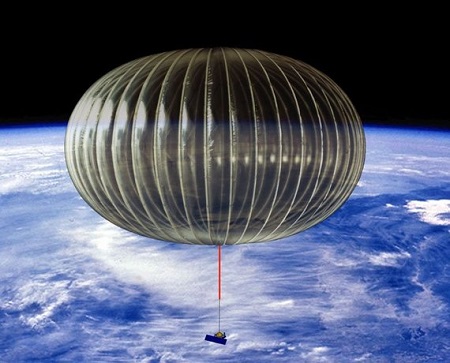 A rendering of a high-altitude balloon suspended over most of the Earth’s atmosphere. That thing dangling from its underside is a telescope.
Photo: NASA/Columbia Scientific Balloon Facility

During a talk at the Aspen Ideas Festival, the physicist Richard Massey shared the vision for the device hoped to expand human vision, launching some of our most time-tested technologies — glass, balloons — into space. Well, almost into space.”You can get 99 percent of the way into space with a very big balloon, about the size of a football stadium,” Massey said. And! You can get there much, much more cheaply with that balloon than you could with a more traditional space telescope. “You can get basically above almost all of the Earth’s atmosphere,” Massey noted, “for about one percent of the cost of a satellite.”

The project the team envisions is named HALO — High-Altitude Lensing Observatory — and it does indeed involve sending a high-tech balloon up into the highest reaches of the atmosphere. Suspended from which will be, indeed, a telescope. The big goal for the high-flying scope being, Massey said, nothing less than creating “a map of the dark matter of the unseen universe, everywhere.”

The work will be in many ways an extension of the map that Massey and colleagues published in Nature in 2012. The HALO team will take advantage of weak lensing — a phenomenon, predicted by the theory of relativity, through which massive objects bend light — to study how much dark matter there may be in the universe. And to analyze how its (theorized) distribution has evolved across its galaxies since its earliest days.

Here’s where the balloon comes in. Accomplishing that goal — detecting the bent light thought to result from the presence of dark matter — requires a telescope that is unimpeded by the vagaries of Earths’ atmosphere. It requires crisp images of space. “We want to see things that are very far away, so that we can map out all the dark matter between them and us,” Massey said. “We want to see things which are very far away, and therefore very small.”

And that’s especially important in this case, because for Massey and his colleagues — and for most any researcher whose work focuses on the detection of the dark matter thought to account for most of the mass in the universe — light itself is data. “The light from those distant galaxies can travel 10 billion years across the universe, and still be perfect,” Massey pointed out. “But as it passes through the atmosphere, it’s this sort of swirling, turbulent mass of air. And the light bounces around, and everything appears blurred.”

That phenomenon, Massey noted — the blurring effects of the Earth’s atmosphere as light bounces around it in different directions — “is why stars twinkle.” Which is lovely, unless your work depends on the acquisition of crisp images from space. In which case, you may look to balloons to get your pictures of the heavens.