Posted on May 7, 2011 by LighterThanAirSociety 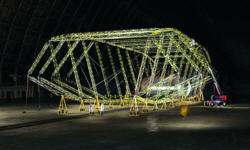 Under a little-publicized program sponsored by the Pentagon, a small Southern California company is working on a design that is radical even by the quirky standards of buoyancy-aided aircraft: a rigid-hulled aircraft that varies its density to land and take off vertically.

After Congress pulled funding from the Defense Advanced Research Projects Agency’s (Darpa) Walrus program in 2006, Frank Cappuccio, boss of Lockheed Martin’s Skunk Works, commented that the idea of a partly buoyant air vehicle with a 500-ton payload, three times that of an Antonov An-124, “just didn’t pass the giggle test.”

But the idea is not dead. Advocates say a buoyant vehicle has the potential to carry more cargo than any practical heavier-than-air machine at much lower cost and using far less energy per ton-mile. It is faster than a ship, can serve inland destinations and does not need a long runway.

The air vehicle portion of the Northrop Grumman Long Endurance Multi Intelligence Vehicle (LEM-V) is intended to be adaptable into a tactical transport demonstrator. Lockheed Martin’s LEM-V contender is the basis of a Canadian-funded program to develop a commercial transport vehicle for Arctic energy support.

This overcomes a big operational and economic problem of a conventional airship—it is efficient in flight but almost impossible to handle on the ground without a mooring device and a large crew. These craft cannot, however, take off vertically or hover with a full load, so they need a runway, even though their lift off speeds are low.

The new Defense Department program uses different technology. Aeros of Montebello, Calif., founded by Russian-born Igor Pasternak, seemed like an outsider in the Walrus contest. But the company is now the sole-source supplier for a project called Pelican, funded via the Pentagon’s Rapid Reaction Technology Office, reporting to Zachary Lemnios, deputy director for defense research and engineering.

In 2012-13, Aeros plans to fly the Pelican, a 230-ft.-long, 600,000-cu.-ft. demonstrator for its rigid-aeroshell, variable-buoyancy (RAVB) technology. Inside the shell, comprising a load-bearing frame of carbon-fiber trusses covered by thin-gauge rigid panels, will be a membrane to contain the helium lifting gas. Inside that membrane will be pressurized pump-fed tanks. More helium under pressure in the tanks makes the vehicle heavier, and less makes it lighter.

The initial Pelican is not designed to have a payload, but to demonstrate the aeroshell, the variable-buoyancy system (a test rig has been built under a Darpa contract) and a flight-control system that integrates aerodynamic, buoyant and thrust-vectoring effects to allow the craft to take off and land vertically and to hover. In later and larger versions, the variable-buoyancy system will allow the craft to load and discharge cargo without venting gas or needing external water ballast, while remaining heavier than air for stability on the ground.

The variable buoyancy system is expected to be more responsive than the air-filled ballonets that are used to adjust lift on non-rigid airships, which have to maintain forward speed or be moored at all times.

Some technologies needed for very large vehicles would be left to the second-generation RAVB test aircraft, a 440-ft.-long, 3.8-million-cu.-ft. vehicle with a 60-ton payload. Those features would include a combined diesel and gas propulsion system and the ability to superheat helium for takeoff. After takeoff, the helium would cool to ambient temperature and the vehicle would use aerodynamic and buoyant lift to cruise—80-100 kt. at up to 10,000 ft. Aeros has also experimented with techniques for extracting water from the engine exhaust to compensate for fuel use. (Superheating and water extraction were tried in the 1920s and 1930s but have not been used since.)

The 60-ton vehicle is unfunded, and a 200-ton, or even a 500-ton version is further in the future. Aeros says its vehicles will be able to transfer loads on and off ships and discharge without landing. The company argues that survivability may be better than some expect: The underside of the gas membrane is under no pressure, so will not leak much if punctured, and the hull structure is redundant and lightly loaded. Nobody expects these aircraft to fly into hot landing zones.

Despite the fate of Walrus, the support of technological strategists such as Lemnios indicates that not everyone is laughing.