Posted on June 6, 2011 by LighterThanAirSociety 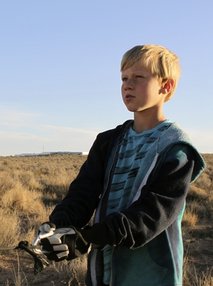 TOME, N.M. – Nine-year-old Bobby Bradley floated into history early Saturday, taking off solo in a hot air balloon and landing perfectly about a half-hour later to become the youngest trained pilot to accomplish such a feat.

Showing maturity and composure well beyond his years, Bradley proved any doubters wrong as he strategically touched down on a dirt road — exactly as his parents had instructed. Some among a small crowd gathered for the event then doused the boy with non-alcoholic champagne and silly string as he knelt to drink his celebratory glass.

“It was awesome. It was amazing. I loved it,” he said.

“Absolutely perfect,” is how his mother, Tami, described the landing.

His father, Troy Bradley, proudly remarked that his son “flew the way we knew he could.”

The boy took off to the cheers of more than 50 friends, family and classmates who gathered at 5 a.m. in Albuquerque to drive in a caravan to a remote field that was chosen for its lack of power lines and other potential hazards.

Takeoff came shortly before 7 a.m., along with three other balloons whose pilots included a designated balloon examiner for the Federal Aviation Administration and a balloonist who helped make Bradley’s special ultra-light craft.

“I didn’t want to land,” he said afterward. “I wanted to keep going. It’s fun out there.”

Although his mother said she would not normally recommend that 9-year-olds fly solo, she said it was a natural progression for her son, who is “not your normal 9-year-old.”

Bobby is a fourth-generation balloonist and has been flying in them for more than half his life, with his parents and some of the sport’s most experienced and decorated pilots. He has nearly 30 hours of flight time with his father in a standard hot air balloon. But he can’t get his pilot’s license until he’s 16, so his family and friends built the smaller balloon that is classified as an ultra-light aircraft to enable Saturday’s solo flight.

Both of his parents have been licensed pilots since they were teenagers. The two won the America’s Challenge Gas Balloon Race, one of the country’s biggest events in balloon racing, in 1998. Troy Bradley also helped pilot the first balloon to fly from North America to Africa and has set dozens of world records in ballooning.

Two days before the landmark flight, his maternal grandmother Jan Stevenson — who sewed the panels of the blue, red and yellow balloon together — gave him a jacket his late grandfather Bob Stevenson used to wear, complete with all the ballooning pins he was so proud of. Although Bobby had planned to wear it for the flight, it was getting warm out by the time he took off so he carried it in his gondola, along with two beanie bears belonging to him and his sister that he said his father always takes with him when he competes in balloon races.

After the flight, he hugged his grandmother and asked, “Were you scared?”